Canvas Radar is a MapStructure-layer for creating Radar displays in FlightGear using Nasal and Canvas, as of 02/2014 it is being actively developed by 5H1N0B1 with a focus on the Mirage 2000-5 fighter jet. The Radar implementation is heavily based on xiii's original code and will be further generalized and adapted to be usable in the MVC-centric design of Philosopher's MapStructure framework.

The Radar framework is being closely developed in conjunction with F-JYL's CanvasMFD framework to ensure that aircraft developers can easily adopt the framework in their own aircraft, without having to modify a ton of Nasal code.

Come up with a generic radar framework for MapStructure that is completely aircraft-agnostic, so that it can be easily adopted, integrated and customized by aircraft developers, but also by people doing ATC related projects, like ATC-FS or ATC-aircraft.

Currently, we're in touch with Adrian to see if his Radio Propagation could be rebased against git/next and exposed via Nasal/CppBind to provide a better option for radar modeling. This is something that we should probably discuss with xiii (developer of the original Nasal code) and vivian (agradar developer) at some point, vivian also expressed interest in updating the agradar to support the Radio Propagation code written by Adrian[4].

Also, i4dnf mentioned that we could benefit from making antenna profiles configurable for different aircraft. Adrian mentioned that he has access to the radar manual of the F16 and that he's familiar with the various operating modes.

The Flightgear Next Gen Radar would be able to (not sorted) :

Currently, we're playing around with a modified version of the MapStructure TFC (traffic) layer, to use this in a standalone XML dialog and customize it as needed. Once that is working as expected, we will investigate adding xiii's radar modeling code and replace the traffic/TCAS functionality accordingly. Afterwards, we will need to integrate this with the Canvas MFD Framework to ensure that aircraft developers can easily use the framework in their cockpits.

At that point, it would then also make sense to check out the Category:Fighter aircraft and Category:Carrier-based aircraft categories to get in touch with the developers and maintainers of aircraft with RADAR, and ask them for adoption/integration feedback.

Subsequently, it would make sense to look at existing hard-coded displays, like the agradar, groundradar and wxradar to support these use-cases, too. Specifically, ATC-FS and ATC-aircraft could greatly benefit from this effort.

5H1N0B1 also mentioned that a properly-designed component would allow other uses, too - such as for example, equipping Scripted AI Missiles with a real RADAR, or adding radar support to Bombable - likewise, it would be possible to add such radar displays to AWACS aircraft, or even to vessels like the Nimitz.

These are primarily requirements for the Mirage2000 that is currently being revamped by 5H1N0B1[5], these changes could also be used to add ATC support to AWACS aircraft[6]. 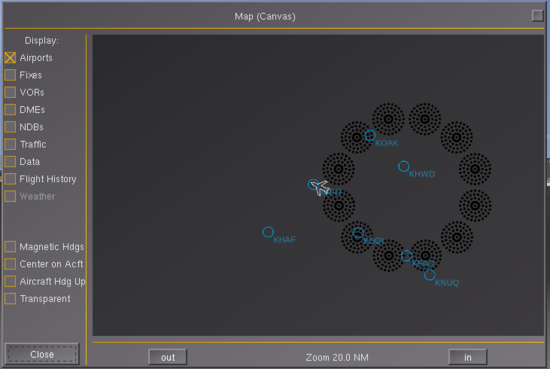 A simple MapStructure layer called DEMO that renders a circle of NDB symbols (SVGs) in the vicinity of the aircraft using geo.nas and its helpers like geo.aircraft_position() and the geo.Coord.apply_course_distance(course, dist) method as per [1]. See Canvas Radar to learn more.

Once this works, you can basically refine your searchCmd() method, i.e. by using actual data from the "ufo editor"

People already having some Nasal experience (property tree, OOP), should be able to complete this 20-30 minutes, and you would end up with an ATC display and a custom symbol - next, you will want to "filter" traffic based on surrrounding features like terrain, altitude, radar settings and radio propagation etc.

If you find yourself getting stuck somewhere, look at some of the other .symbol/.lcontroller and .scontroller files - especially the shorter/simpler ones - and then read the wiki section about adding new layers a few times, and everything will start making sense

Basically, this should get you going quickly:

Next, you will want to investigate the positionedSearch class, which provides a powerful means to do range-based filtering of positioned objects, these can in turn be filtered (searched) for other characteristics, i.e. based on range, terrain, radio propagation or heat etc. Take a look at TARGET.lcontroller and its searchCmd() helper.

Once the previously outlined steps are working, I would consider customizing the searchCmd in your lcontroller file. At the moment, TFC.lcontoller works like this https://gitorious.org/fg/fgdata?p=fg:fgdata.git;a=blob;f=Nasal/canvas/map/TFC.lcontroller;hb=c78b2f936891bffad49e27d84d952a0d45540eef

The line where I added PLACEHOLDER is where you could insert your own logic, i.e. the radar-specific stuff from xiii's code - such as checking distance, azimuth, altitude - radar profile/signature, terrain etc - and only append the aircraft if the whole check evaluates to true.

You will find that the whole lcontroller file uses a wrapper called "TrafficModel" - you can either extend this to use your "Target" class directly, or change your Target class accordingly. The main thing is that your class should be derived from a geo.Coord object, so that it has the lat/lon/alt methods available and can be directly processed by MapStructure without requiring further changes.

You will see that the TrafficModel class is used in a few places - so this would need some changes if you use some different approach, but it's still simple. The external interface is all about having lat/lon/alt (positions) and the .equals() method Overall, TrafficModel is just a dumb helper class that is a wrapper for geo.Coord() objects, so there's no reason why you shouldn't be able to extend your own Target class accordingly, you can use the TrafficModel as a template. I would just suggest to maintain the MVC separation at all times.

Analogous to the in_range() helper, you could add other functions for your own filtering needs (altitude, terrain-obstruction etc) - it's better to use separate functions for each, than inflating a single function unnecessarily. As you can see, the in_range() function is unaware of TrafficModel specifics -it deals directly with lat/lon pairs..

So it's simple to reuse as is. TrafficModel itself is typically directly used via the constructor call: .new()