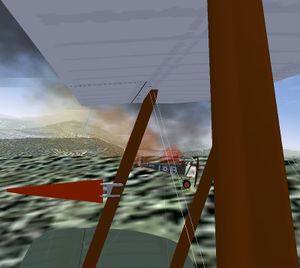 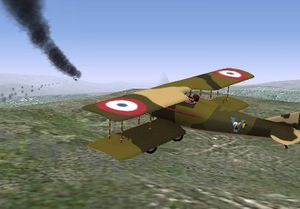 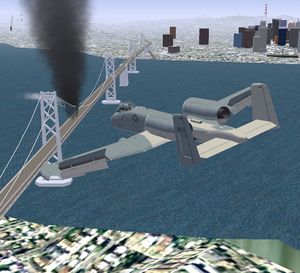 Bombable is an addon for FlightGear that adds bombs, weapons, damage, fire, and explosion effects to FlightGear that work with the main aircraft, scenery, AI aircraft and other AI objects, and multiplayer aircraft objects. Bombable turns FlightGear into a combat flight simulator.

Download the current version of the Bombable add-on here.

Downloading and using in FlightGear

How to add Bombable to a FlightGear aircraft

FlightGear seems to have most all the pieces under the hood to make an excellent platform for simulating historical military aircraft, dogfighting and fighter plane tactics with aircraft of different eras, and bombing runs and other tactics from various historical eras, and other aircraft simulations that could depend on FlightGear's realistic, underlying flight models.

Some aircraft have implemented limited weapons, armament, and explosions. The A-10 Warthog was released, including an AI scenario for the A-10 to bomb M-1 tanks, which then exploded realistically.

The Bombable add-on was designed to put all the available FlightGear elements together as a proof of concept to see if FlightGear can be a realistic simulator for aircraft that include weapons and armament, working with AI aircraft and over Multiplayer, including:

Bombable was developed with the idea that in a realistic flight simulator environment, the rules and techniques of dogfighting and aerial warfare--like the World War I Dicta Boelcke, by Oswald Boelcke, one of the first great aces of the war--would naturally develop and naturally play out.

The last two are kind of game changers. With FG 2.12's ability to load and unload scenarios instantly and easily, and Bombable's ability to move scenarios to wherever you are, anywhere in the world, scenarios are now flexible and moveable.

Download the current version of the Bombable add-on here. Below is information about previous versions and updates. 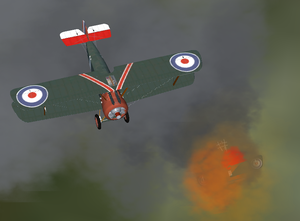 Version 4.5b works with FG 2.12.x and has some improvements that take advantage of FG 2.12's new AI scenario handling system.

In addition, 4.5b has some improved aircraft, tweaks AI aircraft performance and realism, and fixes a few bugs.

Flug just uploaded a new version of Bombable that is compatible with FlightGear 2.10.0--in fact, it should work with all 2.X versions of FlightGear.

Thanks to Voudoun da Vinci for helping track down some of the problems and the fixes.

Bombable is still pretty new to FG 2.10, so please let me know if you find any problems. Message in this thread is the best way.

FYI part of the package is a new, greatly improved, historically accurate (to the degree I could make it so!) JSBSim FDM for the Sopwith Camel.

The idea was to make the Camel fly like a real Camel--not just when flying safely well within the envelope like a commercial pilot, but when taking it to the edge and beyond, as real combat pilots did in WWI.

Bombable is now compatible with FG 2.10 (as well as 2.8, 2.6 and earlier versions) and includes a new, far more realistic and true-to-life JSBSim flight model for the Sopwith Camel.

Version 4.4 is a complete revamping of Bombable into more of a complete, cohesive system for Multiplayer and AI dogfighting and bombing. The accuracy of all the basic functions has been improved and made more realistic, and a number of new "Bombable- compatible" aircraft have been included, from WWI fighters to modern-day jet fighters.

See the To Do file (many of which have now been done) for many more changes, updates, and improvements.

In combat, they will shoot you if that location/direction is lined up with you. The AI B-17 Bomber included in the package will shoot at you from the rear; the M-1 tank will shoot towards the front at about a 45 degree angle, Jeep will shoot forwards and upwards,Ferries will shoot forward or backwards, etc.

The result is a far more realistic experience. Shooting bombers used to be like shooting fish in a barrel--now between the bombers shooting at you and the fighter planes coming in from high cover, you're lucky to score a few small hits and get out of therealive . . .

Generally when flying Bombable's AI scenarios or flying over multiplayer with another person using Bombable, your best experience will be to use one of the aircraft provided (and identifiable by the -Bombable extension) or another aircraftspecifically set up to use Bombable's capabilities.

This is a beta release that works with Flightgear 2.4.0. Some AI aircraft characteristics have changed in FG 2.4.0 so there are someproblems and different behavior in the AI aircraft.