This article describes an effort to implement a realistic radio propagation model inside FlightGear. For various reasons it was not integrated into FlightGear, but this page is kept as the subject comes up now and then.

The code and algorithms described below enable the following features in FlightGear, which to the author's knowledge are unique for a conventional flight simulator:

We are currently looking into updating the code base, to ensure that things still work with FG 3.0+

The purpose of this document is to evaluate the possible usage of the FlightGear engine as a tool for RF signal loss prediction over a rough terrain, using geographical features embedded inside terrain data and well know propagation prediction algorithms.

Well known and used are Radiomobile,[1] a Windows application by Roger Coudé, VE2DBE and Splat![2] (multiple platform) by John A. Magliacane, KD2BD.

A common point of these applications is the usage of the Irregular Terrain Model (ITM, also known as Longley-Rice)[3] which is a propagation model developed by the U.S. Department of Commerce NTIA/ITS - Institute for Telecommunication Sciences and improved by several others (notably ITWOM[4] by Sidney E. Shumate, code available to the public on a limited usage license, copyright Givens-Bell[5]).

It is a general purpose model that can be applied to a large variety of engineering problems. The model, which is based on electromagnetic theory and on statistical analysis of both terrain features and radio measurements, predicts the median attenuation of a radio signal as a function of distance and the variability of the signal in time and in space.[6][7] It is currently used among others by NASA, Alcatel-Lucent, US Army, University of Massachusetts and amateur radio operators around the world, and is widely considered the best propagation model for frequencies between 50 - 5000 Mhz freely available to the public.

One of the most active users of the Irregular Terrain Model is the US FCC (Federal Communications Commission), which is currently applying the updated version of this model for broadcast station regulations.[8] 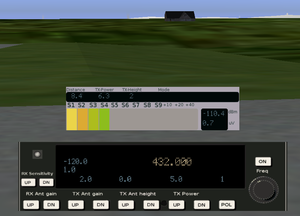 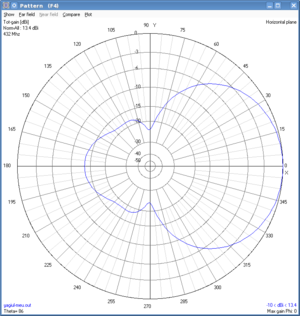 The implementation of radio propagation analysis is mostly finished inside FlightGear. Since the terrain used by this open-source flight simulator contains both elevation information and landcover data, it seems especially suited for a 3D tool to predict RF signal levels, both for aviation navigational aids and radio communications, and standalone as a point-to-point radio link analysis between two radio stations.

FlightGear allows the user to place models on the terrain at specific locations, and to setup internal properties via a simple XML format.

Rather complex radio receivers and transmitters can be simulated using the Nasal scripting language or via an external utility, as well as an UI to perform signal level reading and modify receiver and transmitter physical characteristics. The 3D aspect is also interesting, since it allows one to perform predicted signal level reading at different locations while inside the simulator, using visual cues to place the radio equipment on the terrain.

Since this open-source flight simulator is capable of running on multiple platforms, including GNU/Linux, Microsoft Windows and MacOS, its availability is not limited to one operating system.

Most of new generation FlightGear terrain uses NASA SRTM v3[9] elevation data, which has a distance of 90 meters between elevation points. This is considered accurate enough for most signal analysis, although more detailed elevation data from topographical maps, ASTER DEM or other sources can be acquired. Default landcover in FlightGear comes from VMAP0[10] layers, with more accurate geodata being available from national and international programs, such as Europe's flagship program, the CLC2006 "Corine" landcover project.[11]

Landcover data is used to analyze path loss and improve predicted signal levels over specific types of terrain, but should be cross-checked with real-world RF signal readings took at the same locations.

Antenna radiation patterns obtained using the free tool NEC2x can be used for both transmitters and receivers. Patterns obtained from other applications can be used too, as long as they are converted to the rather simple text format which is used by the FlightGear radio code.

Also, data from FlightGear's realistic atmospheric and weather simulation could be taken into account when path loss analysis is performed.

If you are involved with maintenance or have detailed information about navaid transmitter capabilities, the author would appreciate if you listed in the discussion page the following information:

In order to use the point-to-point routine of the Longley-Rice model, a terrain profile between the two radio stations is generated by sampling the terrain with a configurable distance between points (default is 90 meters, which is equal to SRTM 3 arc sececond precision). This terrain profile is fed to the ITM routines, together with some other parameters: Transmitter output power, receiver sensitivity, antenna heights above terrain. These routines are the core of the implementation, and incorporate improvements made by J. D. McDonald, John A. Magliacane and Holger Schurig to the original code.

The result is signal attenuation in dB along the direct path. The ITM functions will determine for us if the radio propagation is line-of-sight, diffraction dominant or tropospheric scatter. For diffraction propagation, it also determines if it's single horizon or double horizon.

This information will further be used in calculating ground clutter obstruction for different terrain types. The most frequent obstructions that affect radio signals are built-up areas and tall vegetation. By calculating the interference of ground clutter inside the first Fresnel zone, we can determine signal losses with average precision. In order to do so, we need two more numbers in the equations: Clutter height above terrain, and clutter density. These are stored inside a plain text file located inside the Materials/ directory, allowing for more terrain types to be added and properties to be changed by the user. The aim is to make these two factors as configurable as possible to the user, in order to be able to adapt them to local measured conditions.

The radio stations parameters are also completely configurable by the user, by setting internal properties, via Nasal scripting or otherwise.

For ATC comms, at the current state, some basic assumptions are made about transmitter power, receiver sensitivity and antenna heights: These are based on standard ATC interactions, but this will be changed in the future to support a wider variety of signals. It might even be possible to simulate realistic ACARS transmissions, as well as transponder responses with realistic range and signal quality (introduce errors based on signal quality etc.)

To enable the radio code, use the following command line flags:

Use the SQLite database for landcover types and radio properties. It is named material_radio_properties.sqlite and placed in $FGROOT

Distance between terrain profile points. Defaults to 90 meters which is the accuracy of SRTM elevation grids. A smaller value coupled with disabling performance mode will have an impact on the performance and will only be useful in very high resolution terrain. Use a larger value to relieve performance issues. 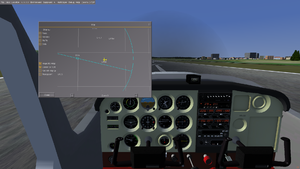 VOR received on ground 80 km away with no line of sight, using old code 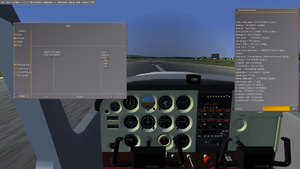 VOR no longer received on ground 80 km away with no line of sight, using new radio code 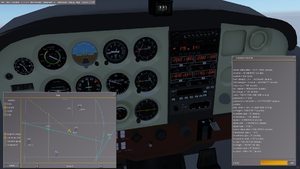 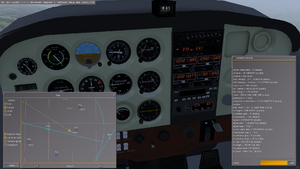 VOR received full signal, and now DME received too, we have cleared the small obstruction. UHF propagation is fun!

Features which still need to be implemented 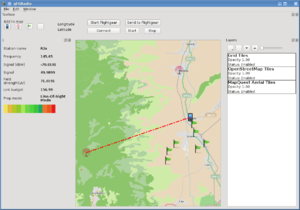