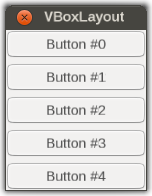 As of 07/2012, there's a general consensus to replace the current FlightGear GUI (based on PLIB/PUI) by using the new Canvas system.

However, before we can work on adding new widgets to FlightGear, we need to provide wrappers for the existing hardcoded PUI widgets, see Canvas GUI.

Canvas widgets are dynamically created GUI widgets that use the Canvas subsystem to create custom, owner-drawn, GUI widgets in a scripted fashion using Nasal. The textures are conventional canvas textures, however they are rendered by the GUI system, so that scripted event handlers can be implemented which respond to GUI events, such as keyboard/mouse input or other events (resize, update, redraw etc).

Using canvas widgets, it will be possible to create your own GUI styles and even completely new, fully interactive, GUI controls (buttons, text boxes, list views, tree views etc) just by using Nasal, without touching any C++ code and without rebuilding FlightGear. The Canvas system supports loading SVG files and raster images, so that canvas elements and GUI widgets can be assembled from SVG elements, meaning that you'll be able to use a conventional SVG editor like Inkscape to create/edit FlightGear GUI widgets.

This section lists a bunch of ideas related to supporting Canvas textures for GUI drawing needs, i.e. to render Canvases as textures, but also to increasingly implement parts of the GUI (such as custom widgets) using interactive Canvases with scripted callbacks, the idea is to work around existing GUI/PUI shortcomings by using Canvases to implement custom styles and widgets.

In contrast to using some hardcoded GUI system (PUI, osgWidget, etc.) this approach would give much more flexibility and also the means of modifying and creating new widgets without the need to touch any core code.

With the Canvas system every type of widget would be possible, so that also things like submenus can be realized.

Another advantage of the Canvas approach is that it is heavily using the property tree and therefore is already fully accessible from Nasal code and also configurable with the existing xml formats. [1]

The point of the canvas widget demo is to demonstrate how powerful and flexible the new canvas system really is, i.e. it cannot just be used for aircraft scripting (instruments, MFDs), but also for GUI scripting - which means that using the canvas system would unify the 2D rendering backend (all 2D rendering can be handled via canvas), while reducing the amount of C++ code we have doing these things, which would mean that the GUI system could be entirely maintained in scripting space, i.e. as part of the base package, by people who don't need to know C++ - some basic Nasal knowledge will do.

Basically, adopting the new canvas system for such and similar purposes, will mean that tons of old/oudated C++ code can be phased out and replaced by a single consistent implementation in C++, that is using modern C++/OSG code - which ultimately also means that OSG itself can make more assumptions about what's being rendered, so that more optimizations (= better frame rates) can be more easily accomplished by using OSG coding patterns and protocols in a single place, instead of outdated/custom/3rd party libraries which would need to be manually baked into the existing FG/SG/OSG eco system.

Currently, the canvas system is integrated in such a fashion that it will keep working with the old GUI code still in place.In addition, all of the exsting GUI features (layouting, XML processing) are implicitly supported due to the way the canvas system is implemented at the moment. These are real roadblocks when implementing a new GUI library next to PUI, because all of the existing stuff would need to be explicitly ported (either in C++ space or by converting tons of XML files).

Overall, the canvas system will give us all of this "for free", and it will mean less C++ code in the source tree, too - i.e. better maintainability.

Also, once the standalone "FGCanvas" is available, it would also be possible to run the GUI in multiple windows or even in separate processes.

In addition, by using the canvas system for GUI widgets, it would also be possible to render aircraft instruments, MFDs, HUDs etc WITHIN GUI dialogs, too.

List of missing things (if you'd like to get involved to help with any of these, please get in touch via the canvas forum):

Fully Canvas based implementation (in progress as of 08/2012)

This section describes a possible way of completely getting rid of PUI and providing a GUI system by only using the Canvas system.

Certain properties can be set to affect the appearance and behavior of the dialog:

So it just involves checking for osgGA::GUIEventAdapter::KEYDOWN and propagating the events to a handful of child properties for each canvas element that subscribed to keyboard events.

It'd make sense to also use a boolean property to enable/disable reception of keyboard events, that will allow us to set the "focus" of windows and widgets. And then we only need to expose some keyboard-specific events like key-up, key-down, key-value etc at the C++ level, which all boils down to just calling fgSet*Value().

The rest will be handled at the Nasal level, so that users can register their own listeners.

The nice thing is that once this is properly implemented, we'll already have a unified I/O handling system for GUIs, instruments, HUDs etc. and it moves all the implementation details to the base package again.

BTW: There is already a property to toggle the mouse cursor via setprop, so this could also be wrapped in gui.nas, obviously being able to use a canvas texture as the cursor would prove the point that "everything is a canvas" in the design.

I was looking through our earlier discussions, and how osgGA can be used for keyboard support. And like I mentioned, I think it would make sense to adopt the same approach that you used for mouse support here.

Overall, I feel it would make sense to closely model this after the way this is handled in Java, i.e. using the same "property events" that are supported in Java for mouse/keyboad and "windows" - just specific to canvas textures, instead of just "windows".

So instead of "window" events, we'd have "texture" events, so that these can also be used for non-GUI purposes, such as instruments

Looking at our last discussion on forwarding mouse events to nested canvases, it would then really make sense to also have "window/texture" events (create, update, redraw, resize, move etc). So that we don't need to add any C++ code for such things.

And by having "high level" events such as "mouse-enter", "mouse-leave" or "texture-resize", "texture-moved", "has-focus","lost-focus" etc, it would be very simple to implement MFDs and GUI widgets in Nasal without requiring C++ workarounds.

So it's really just about supporting 10-15 event types in the C++ code which set some properties, so that the rest can be implemented in Nasal.

Obviously, some events would be texture specific, while others would be specific to groups or elements and should probably be forwarded, like you suggested earlier.

And then it'd be very close to how this is handled in Java, because we could use conventional Nasal listener callbacks to model the details in scripting space.

Specialized widgets could then use these events to implement widget-specific events, i.e. for list view, tree views or other complex widgets - but these could then be implemented in Nasal.

We probably want to support Java-style Key listeners and Key bindings, so that widget-behavior can be easily implemented in Nasal space

Also, we are currently able to reload the GUI in FlightGear, we will want to retain this feature. But once we start implementing widgets in Nasal, we won't just want to reload the GUI XML files, but also the widget modules from $FG_ROOT/Nasal/widgets, so that widgets can be easily developed and tested, without having to restart FG.

This can be implemented in Nasal space, there's no need to modify the Nasal sub modules code for this - however, we also need to ensure that there's a sane way to terminate all active widgets, i.e. by stopping all running instances. This will also be important to handle simulator reinit/reset.

The parsegui function parses a dialog xml file and calls the constructor of the corresponding widget. The GUI parser should handle XML versioning, so that future updates to the underlying XML format can be easily supported, without tons of custom code. It might make sense to provide a base class, so that future parsers can be easily implemented next to the existing code, so that new parsers don't need to touch any of the old code!

We need to keep the existing way of specifying GUI files via XML - it's a nice, declarative way of building the dialogs. Switching to an imperative system would be a step backwards. I do like the idea of a gui/widget/widgetname.nas structure so we can easily create a factory function and hack / add widgets.

It is important to keep in mind that the Canvas system will have at least 3 related uses:

All of these will require an XML parser that turns the existing structure into canvas nodes. The existing SVG parser is purely implemented in scripting space (see svg.nas) using the XML parser in $FG_ROOT/Nasal/io.nas

Given that all three file formats are PropertyList-encoded XML files, it should be possible to come up with a "Xml2Canvas" interface class which implements the XML parser and the Canvas interfaces. That will ensure a maximum degree of code reuse.

Afterwards the getMinSize method is used to calculated the available space and stretch widgets if required.

To ensure that the core widgets in $FG_ROOT/Nasal/widgets cannot be accidently invalidated by users, the widget namespace/hash will be made immutable using globals.nas magic.

Building Widgets at the C++ Level

We can always create widgets from C++ by adding canvas elements directly through the property tree, but I think a fully scripted GUI is the most flexible and powerful approach. Let's keep in mind that all the original hard coded PUI dialogs were increasingly replaced with XML dialogs in FlightGear, which was important and a lot of work.

One of the most important goals of the canvas system is to make 2D drawing accessible to end users, without having to know C++ and without having to rebuild FlightGear. This automatically means that large parts of FlightGear will become more maintainable, because they can be moved over to the base package. Starting to implement GUI widgets at the C++ level would defeat the purpose.

While it would definitely be possible to implement widgets by directly creating a canvas via the property tree, that would probably be counter-productive, because we clearly don't want any hard coded C++ special cases.

Now, if someone really wants to implement some custom canvas widget that cannot/shouldn't be modeled in scripting space, then the canvas infrastructure can be extended (see Canvas Development.

Just take a look at how the existing Canvas Maps are implemented currently. The same approach could be used to provide support for new/more specific drawing modes, such as: