On August 17 after a year and a half of hard work, FlightGear v2.4.0 has finally been released! Thanks to the key developers that took the lead to overhaul the FlightGear release plan and create a regular release cycle. Thanks also to each and every developer in every portion of the FlightGear community who have contributed to make FlightGear such a success! Please click here to jump to the download page.

Along with the v2.4 release, the FlightGear.org web site has seen a complete overhaul during the month of August. The new website is based on "wordpress" which supports multiple editors and allows for much easier editing and updating of content. One interesting feature of wordpress is the ability to create "posts" and then allow anyone to add their own comments (pending approval). Newsletter contributors (and anyone else) are invited to create a "post" for the main flightgear.org web site. This is a great way to promote your own project and do so in a context that allows more paragraphs, more detail, and more pictures than can fit in a newsletter article. So please continue to submit newsletter articles, but also please consider developing a longer version for the main web site! 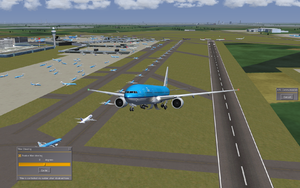 Heavily congested taxiways at Schiphol after the 777-200 had been blocking active runway 24 for nearly 4 hours.

Even though the preparations for our upcoming release were still going on at full throttle, development for the next release had already started. In early August code changes were committed, which allow FlightGear users to interact with an artifically intelligent ATC system. Currently it is possible to request startup clearance, permission for push back, as well as taxi-clearances. A brand new, and highly experimental, ground network visualization system makes it possible to taxi from parking to runway along the route given by ATC. Hold position and resume taxi instructions can be be given in order to avoid collisions with other (AI controlled) aircraft. Hand-off to a tower controller has been inplemented. More interactive take off procedures, are in the planning stages. The aim is to have all stages of IFR commercial aviation traffic under ATC control before the release of FlightGear 2.6.0, which is planned for early 2012. 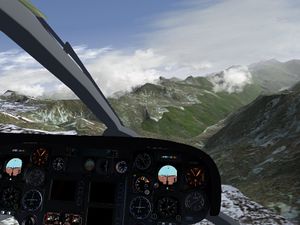 The Local Weather package is currently undergoing a restructuring to make use of the Nasal interface to the system generating the default 3d clouds written by Stuart. This system has better performance, faster loading times of cloudlets and can move clouds in the wind far more efficiently, which in essence means improved framerate with higher detail level of clouds.

First tests (so far without any cloud-terrain interactions) look very promising, but there are still significant problems both on the Nasal and on the hard-coded side of the interface left.

Together with significant improvements in the speed of terrain quearies (about a factor 50 faster now!), this should mean that even detailed modelling of cloud-terrain interaction should be possible in the future.

An experimental release (with several features unavailable) will probably be ready by mid-September.

TerraMaster is a Java-based application that lets you pick-and-choose which scenery tiles you would like to sync with the FlightGear scenery server. Ideal for those people who prefer to TerraSync preflight rather than inflight.

fgxmlbuilder is a Bash script that automatically generates animation xml's for X-Plane scenery that has been converted to FlightGear by xplane2fg.

Currently works with Linux and it has been tested succesfully in Cygwin in Windows XP. It does not work with MinGW.

A note to Windows ysers: avoid spaces in file paths. 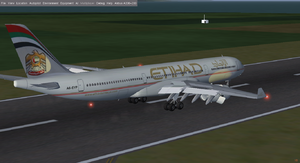 TheOmegaHangar has been working on this aircraft for the past two weeks and it's come to a stable state with a good JSBSim flight dynamics model, 3D model and systems. It also has a complete three-class configuration cabin, an Airbus flightdeck and some features like wing flex, lightmaps etc. The airplane is not available for download yet as it was hosted in Merlion Virtual Airlines forum which is temporarily down due to rebuild. 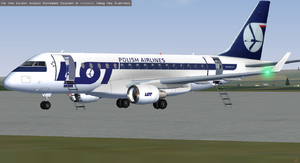 A LOT Polish Airlines Embraer 170-100 preparing to board.

This project was initially started by TheOmegaHangar about 2 months ago but was stalled due to other projects. Now, a completely new model has been made and currently, we're working on a good JSBSim FDM. All the animations are complete, the cockpit instruments are modeled (not animated yet) and some cool stuff like the ladder, cabin and wing flex are also completed. You can track this project in the forum 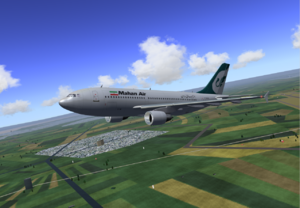 A few months ago, Icecode and Star started the development of the Airbus A310-300. The latest version of the model includes a detailed cockpit and a realistic YASim FDM. You can view the development progress at the forum

A french team who likes to be called "The Flightgear France patrol" has been working on many aircraft. The team is composed of many specialists in various fields (3D, texture, FDM, nasal, xml, sound...).

The France patrol is proud to offer you a new airplane: the Tecnam-P92. It is probably the best ultralight aircraft available by now in FlightGear. All the instruments, electrical systems and most of the sound are realistically simulated. You can download this airplane in Helijah's hangar, as well as in FlightGear's Git repository.

This team is currently working on other planes and helos, such as the R44, C-47 and D510. Those aircrafts can also be found in Helijah's hangar and in Git.

At that time being the bird is in a very early stage of development, but with a little bit of time it could become a very nice carrier based flying ATC, needing (1) a pilot to stay on station flying flat "8s" against the wind and (2) a skilled air controller to "control" the kind of nasty boys one can usually see around the Nimitz. Right now, the model available in Git is very crude (but the landing gear) and the FDM isn't completely tuned. There is the minimal set of instruments, but no lights and no fancy details in the cockpit yet. Anyway she can already land and take of from a carrier (with day light). This model is coming out of xiii's factory, so be sure it will be over detailed and accurately modeled :-)

VicMar started a few models on Helgoland, including the airport terminal building (EDXH) with the nearby shop and mobile home park.

It is hard to find photos of local landmarks, or interesting buildings there. Anyone who has visited Helgoland and is prepared to show VicMar their photos could make a valuable contribution at VicMar's talk page. The church for example would be a welcome addition. If you know of any such photos on the internet, which cannot be found by searching with the obvious names, details would also be welcome.

Any help is much appreciated. 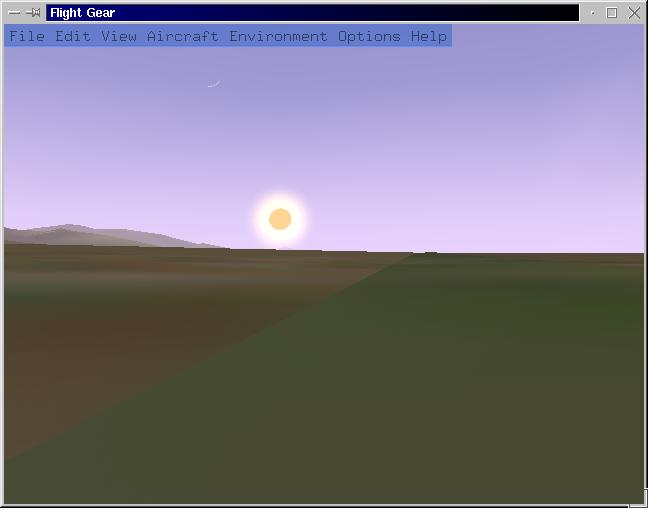 Dated March 18, 1999, this little gem is one of the oldest surviving screenshots of FlightGear. Relatively pale compared to current versions of flightgear, this image shows a very basic landscape, a newly textured sun (with halo), and a very small cresent moon. Back then, flightgear was the only PC based flight simulator rendering the Sun, Moon, and celestial objects at the correct position, and under the correct lighting conditions, in the sky.

Our flight is to celebrate the amazing views FlightGear can give us.

Start your plane at Lajes Field (LPLA). This once was an emergency landing site for the space shuttle so you will have plenty of room to take off. We will have to fly an odd pattern. The reason for that: if you don't fly too high (stick around 3000 while you can) you will have some amazing views.

Longfly is very proud and happy to announce the first official release of the "FlightgGear aircraftlist". After eight months of development it contains exactly 491 different aircrafts for FlightGear with screenshots (click on the thumbnails – not everyone is working yet) and download-links.

Because it is a very long list (6127 lines of code and many images) it may take very long to load on some slow computers. So I'll implement five subpages with always 100 planes. There is also a filter, so you can get a better overview of your favorite planes.

The list should be complete but if an aircraft is missing I urge you to report it to me (pm or forum post or mail) – Thanks! Furthermore feedback, criticism and new ideas are always very welcome in the forum thread

Have fun exploring it!

Stunt Friday, originally a weekly event, is a monthly event where participants compete to record videos of a given stunt, and compete to create the most interesting video and stunt. The challenge for August involved landing an aircraft at the notoriously infamous former Kai Tak international airport in Hong Kong. Andrew Yokoyama ("kyokoyama") won this month's challenge with a crosswind landing of a BAe Concorde in a storm and heavy crosswinds.