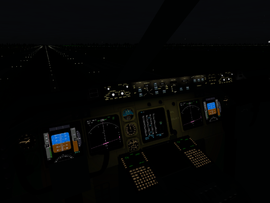 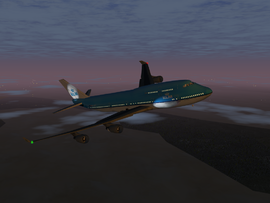 A lightmap is a texture that contains the brightness of surfaces in a computer graphic. The darker a pixel on the lightmap, the less emissive the corresponding pixel will be on the color/photo texture.

Some reasons why lightmaps are useful:

You'll have to create a lightmap for every single texture that is meant to be lightmapped. This can be done by hand, or via some 3D Software, like Blender (which will be used in the example on this page).

That's it! Now, you probably want to see how it looks on your aircraft, which is explained in the next sections. If you are not yet satisfied with the result, you can edit your lamp's settings (step 4) and add more lamps to see what effect that has on the result.

A common way to set up the lightmapping of objects in FlightGear is by creating an Effects file that contains the shader's effect, and then call that Effects file from the XML of your object. To see all possible configurable option of the Effects file read Docs/model-combined.eff. This file can be located within your aircraft Folder in Models/Effects directory, and be named, as an example, shaders.eff. It can contain the lightmap, normal map and other reflection information. Example below includes the minimal necessary to configure the lightmapping section.

Here, name tag includes a name for the effect, then inherits, as expected from /Effects/model-combined-deferred.

The tag lightmap-enable needs to be switched to 1 (use), because by default is set to 0 (not use).

The texture slot for lightmaps is texture n="3". Other slots had been specified for different effects as indicated in the Docs file. Image tag points to the location of the lightmap file. The use of relative paths here, allows this code to be embedded in any Aircraft with some ease. The light-map file will be RGB color-space. the tag lightmap-multi will allow information of the light map to be stored separately in the Red Green and blue channels. By default is set to 0 (no), and the information used will be that stored in the Red channel.

Other important tag that can be modified is lightmap-factor, and this allows changing the intensity multiplying it from a factor between 0 to 1, and thus dim or intensify the light, or even use it as an on-off switch.

Finally, we introduce the Effect in the XML configuration file, located, let's say in Models/Instruments/InstrumentDir subdirectory within your aircraft. This file will typically also contain the path to the 3d model (the ac. file), and other animations applied to it. The effect is applied to each object in the 3d model, that requires it. Several objects can be applied to the same effect. The section of the XML file that applies the effect will read as follow:

Now, the tag inherits-from has a relative path to the shaders.eff file, created/edited in the previous step. Then every object within the 3d model that the effect will be applied to will be listed, one object per line.

Therefore, avoid the following in your xml configuration while applying a lightmap effect.

In your model's .xml file, add the following block of code:

lightmap will be enabled.

Remember that such a block is required for each single texture that you want to lightmap. You can have multiple objects per effect, but not multiple effects per object.