The Learjet 35-A is not included with the FlightGear base package, nor is it available from the Central FlightGear Hangar.

History and technical details of the Learjet 35 can be found on Wikipedia with links towards the Learjet and Bombardier history.

For this aircraft but perhaps also for other aircraft with this setup. Some oddities are probably on-purpose.

V speeds based on typical load.

In FlightGear the limits are more flexible as the real thing. If you would cross over limitations in reality the thing would go poof.

Please note. Despite best efforts the description does not depict the real aircraft. If you have one of the real things, call me, I'd love to hop aboard, but use the Flight Manual for your planning.

This Learjet is equipped with five fuel tanks. The two characteristic tip tanks, two wing tanks and one tank in the fuselage. The tanks are filled from the tip tanks and during filling the fuel is distributed by gravity. This means that after filling each tank has the same percentage of fuel.

All weight above 13,500 lbs should be wing and tip tank fuel.

The flight characteristics are negatively influenced by the tip tanks (Dutch roll and front weight) that is why it is common to burn the tip tanks first.

From Equipment=>Fuel and Payload it is possible to open or close a tank.

There is only one type of jet fuel in FlightGear. To go from Gallons to pounds, multiply with 6.72 .

There is an upgrade kit available to increase the length of the tip tanks giving a longer range of the aircraft.

The flaps have three settings.

This Learjet 35-A has been refitted with the control panel of the Cessna Citation Bravo. The usage and information provided is the same.

Please note that most heading information the Primus 1000 gives is Magnetic except the arrows, those show True. As the deviation-bars also show Magnetic radio navigation should be based on Magnetic. Since runway headings are based on True they should be corrected for the magnetic deviation before entering this information in the machine. For an ILS there isn't much of a problem since it gives just one radial, but for airfields without an ILS but with a VOR-DME the deviation can be well noticeable. The deviation can be retrieved from Equipment => Instrument Settings => HI offset. Add this value to the heading of the runway.

This aircraft is configured for 8 passengers, 6 luxury leather seats, one flight attendant and one flap-down seat. There is room in the front for the luggage of the pilot and co-pilot with a max of 100 lb. Between the wings, just behind the last seats is the cargo hold that has room for 500 lb.

The maximum weight of the aircraft, without fuel, is 13,500 lbs.

It is possible to overload the aircraft with the risk of leaving the undercarriage and tires somewhere on the tarmac. There is an upgrade kit available making it stronger.

If your passengers are claustrophobic advise them to wait for an airliner. The width of the tube is 4.95ft (1,8 meters) and the height is 4.4 ft (1,34 meters) so not much room to take a walk.

The more weight in the back the better, so have your passengers sit from the back to the front.

When the speed is reduced the Lear will nose-dive before there is a stall. If you fight that behaviour, pull up, you will find that a stall without flaps can cause loss of control diving left or right to start a spin. With flaps you can steer left and right without loosing control sinking at an extreme rate. To get out of a stall the easiest steps are to give max power and lower nose. With one engine down however max power will worsen the situation so lower nose to pick up speed, get control back and then increase thrust slowly. Stall character of the Learjet 35-A is described as very mild.

The Learjet loves to go up, it loves to go down. But it doesn't like level flight. The Autopilot has a Yaw Damper function to help level flight. Heavy tip tanks combined with low speeds can cause a Dutch Roll, it will make your passengers sick and can,in extremes, cause loss of control.

This machine is build to be happy above FL390, it's possible to fly KTAS 471 keeping N1 at 100%. Below FL390 the engines are not strong enough. The ceiling at 45,000 is for the standard machine, for research aircraft have been fitted with better seals keeping the cabin pressurized at higher altitudes.

Above 220 KIAS and/or above FL180 the aircraft should be flown with Autopilot since the slightest stick movements, above that speed, can cause scary things.

There are some things you should not do,

Take off and Ascend

Alternative, when there are obstacles (mountains) near:

Fly your course using the Radio beacons you can find. Intercept radials on NAV1.

You can only intercept the ILS radial if you are nearer as approx 40 NM of the runway. A speed below 170 KIAS can cause the aircraft to sink during high bank turns.

The ILS takes away the need for horizontal control. To stay inside the glidescope it is needed to change pitch (yokes) and speed (autopilot). The ILS won't work below decision height (200 feet AGL).

The intention is to slow as much as possible, but with sufficient control for a go-around.

At lower altitudes an engine can eat a bird and shutdown.

Flying with one engine down is good possible however,

Landing is described at Landing, one engine out.

Some things a pilot should be able to perform so find a nice long runway with an ILS and ask permission from ATC to do some practising. Keep the tarmac clean and don't scare the neighbours by crashing.

Since there is a risk that fuel runs out, forgetting to open up the fuselage or wing tanks.

Stall- landing configuration, one engine out

Perform the same stall but this time shutdown one engine and keep flaps at 20.

Landing, one engine out

As a normal landing but with the following critical differences.

Touch-and-go is not possible. Required RW length is double. When the speed is too low a power-up, for a go-around or to prevent a full stall, will push the aircraft uncontrollable to one side. This manoeuvre should be practised on a virtual runway well above the real one before attempting this on hard tarmac.

This procedure (Go-around, Missed approach) should be practised and should be applied when visibility is insufficient for a landing. Practice on a virtual runway a few 100's feet above the real runway. This procedure works for normal landings and with one engine out.

You should have 180 Gallons left in the wings to go-around or to find another runway nearby. 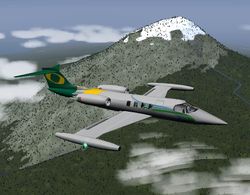 The livery can not be changed as easy as with other aircraft.