Instead of relying on visual landmarks (such as roads, rivers, churches, and towns) for navigation under visual flight rules (VFR), radio navigation relies on radio beacons and is therefore a critical part of instrument flight rules (IFR). Radio beacons can be seen with the right equipment, from far away and independent of the weather. The position of radio beacons is clearly marked on navigation maps. Radio beacons are placed near airports, can be aligned with runways and can be placed in remote areas so to mark a route over them.

The time that a pilot had to fly with the yoke in their hands all the time has long been passed. Our aircraft have an autopilot and radio beacons are ideal for automated flight. With a non-directional beacon (NDB) station we use the heading bug, with a VHF omni-directional range (VOR) station we select the radial to use and the autopilot keeps us on that course.

Dead reckoning (DR) is a technique we use every day in many situations. If you know where you are and how fast you move you can predict where you will be after some time. If there is a good compass and the ground speed is known it is even possible to do some navigation with this method. Even with the navigational tools that are available today we rely on this method without knowing it. For long tracks without radio beacons nearby (and no GPS) it is the only way to navigate.

We always start from an airport, we know where it is on the map. Going further on the way it is possible to get lost so it is important to figure out where we are if we get lost. Lucky most radio beacons tell their identity, in Morse code or in other ways. (in FlightGear the identity can be found in the property tree at /instrumentation/nav/nav-id) That identity gives a good clue where we are on the map but we have to pinpoint our position before we can navigate any further.

Frequency selection on the radio receivers on-board differ from the radio receiver we have at home. At home we turn a knob or press a button and the radio receiver finds the first station. On-board we begin with a known frequency and then tune in. For position finding we need to know what radio stations can be near so we can test the frequencies of the stations. 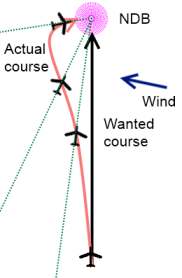 Aircraft deviating from course by wind towards a NDB station.

As soon as we pick up a signal from a radio beacon we can easy navigate towards it. With a NDB we set the heading bug, with a VOR we select the radial.

Starting from a runway or passing over a radio station we know where we are and where we want to go. We set the radio beacon in our equipment.

Both methods will display the inaccuracy of FROM navigation. Wind will drift us from course and even a radial of 1 degree is very inaccurate 100 NM away.

For larger aircraft navigating fix to fix is not practical. In between navigation (for larger aircraft flying IFR) is only done for approach or to identify a place where to change course (to start an approach) since there are runways without beacons.

One can take the shortest route but it is often required to navigate over Airways. Since they are typically in controlled airspace, air traffic control (ATC) will provide sufficient separation between aircraft. Only the route to and from the airways has to be defined in the flightplan.

If it is needed to cross a large area where there is no radio reception plan towards a place where there are several overlapping radio beacons (the cushions that will have to catch us). Once the area is crossed we can test the frequencies of the beacons and get back on course. 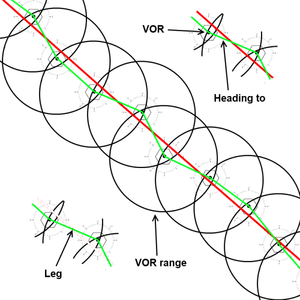 Know the requirements and limitations of the aircraft. Does it need tarmac, an ILS, how much runway? Etc. Not any airfield is suited for landing of just any aircraft. Examine the airfield before deciding to go there. What is the cruising altitude of the aircraft? Can it fly over mountains or should it fly around them? Can it cross areas where there are no radio beacons? What is the range of the aircraft, when does the fuel run out?

From the requirements and limitations we can plan our route.

To plan a route we begin with a map, a ruler and a compass rose. On the map we draw a straight line between take-off and landing. For longer routes a string and a globe is used. Correct the line for obstacles (mountains). The line is the shortest route.

Near the straight line identify the VOR stations. A typical VOR station has a range of about 100 NM at ground level. To prevent FROM navigation the legs should be less then 50 NM in length. To prevent continues tuning of the radio receiver and ever changing course the legs should be above 25 NM in length. If possible prevent NDB stations since they need continues attention. Prevent legs longer as 100 NM.

(The higher the altitude the longer the range of radio beacons. Learn the behaviour of the equipment of your aircraft to optimise your plan. I once had a reliable reception for 270 NM from a VOR station at an altitude of 41000 ft, after that the signal was no longer able to provide a radial for navigating however it was able to give bearing and distance till about 300 NM ))

Draw a line from station to station, each line is a leg of the route. Calculate the length of each leg. From the length of the leg and ground speed calculate the time for each leg. Use a compass rose to read the heading of each leg (True North or Magnetic North). Identify name, type, location and frequency of the stations.

The result should be a sheet listing the legs of the planned route.

The first line will be the airfield with a "0" heading and a "0" distance. The headings on the list will be the heading towards the identified station.

Calculate from the cruising altitude, the sink rate (feet per minute) and the average sink speed (ground speed during descend) the distance the aircraft needs to reach the altitude of the landing runway. Add this point as a separate leg.

Outside FlightGear other factors would be required to create a true flight plan. Factors would include the required use of airways, the definition (calculation) of V speeds, emergency runways and many more. 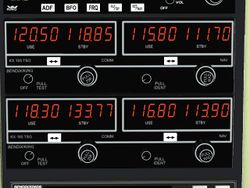 Typically in FlightGear we have two ATC receivers, two VOR receivers, one NDB receiver and one DME. The frequencies can be set either in the Equipment=>Radio (F12) window or using the radio rack (like the Kx165) in the 3d cockpit.

The 3d-rack and window look a bit like this:

Type= COM1 and COM2 are the ATC stations 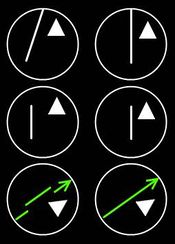 The equipment that displays the received information from radio beacons varies from aircraft to aircraft.

VOR stations are mostly used for automated flight so most, if not all, receiving equipment (on NAV1) can be linked with an autopilot. If there is a separate ILS receiver and a VOR indicator identify which one is NAV1 and NAV2 and which one can be used to control the autopilot.

Receiving the radial from the VOR station has many variations. The most basic is a compass rose and a vertical line, named the VOR indicator. This setup is often combined with an ILS giving also a horizontal line. Similar in setup but a bit more modern is the Course Deviation Indicator (CDI). More common these days is the Horizontal Situation Indicator (HSI) that is also described on Wikipedia. On more expensive aircraft, like jets, the information is combined together on a PFD.

Very modern receivers can estimate the distance towards a NDB or VOR-only beacon by the azimuth towards the station. The higher the altitude the more accurate the estimate.

Use the heading bug to fly the planned course with the methods as described in Basic techniques. The bearing of the NDB station is a reference and check we are flying the right course. The course must be monitored frequently so to correct for wind. If a choice between Go to NDB or Go from VOR is possible consider Go from VOR since it will require less attention, use the NDB station as a reference and as moment to change course to the next station. 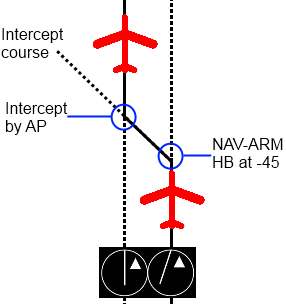 After take-off or while using the heading bug and expecting to have the next VOR station in sight.

Tuning to next VOR station

Do this just before passing a VOR station.

If we would use NAV1 to test the signal the course of the aircraft would change as soon as the course select knob is rotated.

Do this if when entering an area where there is no reception yet from the next VOR station, just after passing the previous VOR station and when the heading towards the new station is known.

The radial and distance towards the fix must be known.

Two radials towards the fix must be known.

The bearings towards the two stations must be known.

A small theoretical abstract since I have not tried it (and don't dare to fearing it won't work).

In theory this should work and should result in a straight line, but RNAV systems do this automatically and will send out a warning if there are deviations.

In FlightGear most similar to RNAV is the Route manager and the GPS.