The Cessna 550 Citation II debuted in FlightGear 0.9.8 in January 2005. It has four "special views": copilot, center-console, passenger 1 and passenger 2.

The Cessna 550/551 Citation II is a light corporate jet built between 1978 and 2006. The FlightGear model is a luxury corporate jet for two pilots and seven passengers. However you should not view the original Citation II as a real jet; with a cruising speed of only 330 KTAS, it was really intended as a competitor for high-end twin turboprops.

The Cessna 550 requires two pilots; the 551 is the same aircraft certified for single-pilot use.

The Sierra Super II is an aftermarket modification of the Cessna 550/551 which replaces the engines with Williams International FJ44-3 turbofans introduced in 2004. They provide more thrust and less fuel consumption. Climb performance in particular is dramatically improved.

The new engines lack thrust reversers; they are not needed because their idle thrust is only 40 lbf, as opposed to 400 lbf on the old engines. 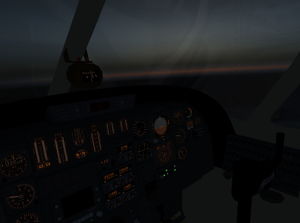 Features available in FlightGear include:

At low altitude, this aeroplane is light and slow enough for sightseeing in the canyons. At high altitude, it is fast enough for medium-haul, multiple-hour flights and GPS navigation. You can fly VFR or IFR, with or without GPS.

For FlightGear 3.4 and earlier

For FlightGear 3.5 and higher

Use the aircraft checklist for startup instructions; alternatively, use the menu for autostart.

As with most aeroplanes, you maintain a constant pitch and speed using the yoke and control descent rate (vertical speed) using throttle. The Citation II has an Angle of Attack indicator, left of the airspeed indicator, to help with this. This instrument uses an arbitrary unit going from 0.0 to 1.0 (these are not degrees; 1.0 corresponds to 14 degrees). The needle should be in the green zone for climb and cruise and in the white zone for landing. The red zone indicates a stall.

When the FD OFF button is illuminated, the autopilot is OFF. Clicking this button will engage the autopilot in wing leveler (horizontal) and pitch hold (vertical) modes. You can also engage autopilot, with the same effects, with the AP ENGAGE button between the seats. The following lateral, vertical and speed modes are available:

Wing Leveler
All lights are off
HDG
Follow the magnetic heading bug selected on the pilot's HSI.
NAV
Follow the radial selected on either NAV1 or NAV2. Switch between NAV1 and NAV2 using the NAV/HSI button.
GPS
Follow the course selected by GPS. To engage, click on the NAV button a second time.
APR
Click this button to engage both NAV1 and glideslope for an ILS approach. Note that, since the autopilot will disengage at least 500 ft above ground, this aeroplane is certified only for CAT I ILS approaches; it has no autoland capability.

You should engage ALT mode in more or less level flight with an angle of attack no greater than 0.2 and airspeed at least 220 KIAS. The autopilot includes a climb schedule and will climb at a speed appropriate for your engines; it will automatically decrease the rate of climb as you gain altitude.

On the base Citation II, you need a stepped climb and 45 minutes to reach FL410. The first step should be at FL330 or thereabouts.

On the re-engined Super II, you can climb all the way to FL430 in one step, even at MTOW, provided you respect the prerequisites listed above before engaging ALT mode.

Autothrottle
Engage and disengage with Ctrl+S to hold current indicated airspeed. Note that the real Citation II does not have this, so you may consider using autothrottle cheating.

Tune the two NAV and COM radios and the sole ADF radio on the cockpit.

On startup, the captain's horizontal situation indicator uses NAV1 and the copilot's HSI uses NAV2. The NAV/HSI button under each HSI switches between NAV1 and NAV2; you can switch the HSIs independently. If the autopilot is engaged in NAV mode, then the autopilot will also switch between NAV1 and NAV2, always following the radio selected on the captain's HSI. The best usage of this feature is as follows:

The two HSIs feature an integrated Radio Magnetic Indicator: the thin red arrow points to the selected VOR beacon (either NAV1 or NAV2). They also have a built-in Distance Measuring Equipment showing the distance between you and the selected beacon, in nautical miles.

The cockpit has additional Radio Magnetic Indicators on both the pilot and copilot side. This indicator has two arrows and two buttons:

Combined with the HSI you can have arrows pointing simultaneously to all three beacons. By default:

To the left of the pilot's HSI is an additional NAV1 indicator with two needles; this merely repeats localizer and glideslope information from the HSI and from the attitude indicator. Thus you have triple redundancy :) This instrument is hardwired to NAV1, so you can fly an ILS approach by hand while simultaneously pointing your HSI at the NAV2 beacon.

The DME shows the distance in nautical miles to the selected beacon. You can use it either to repeat the information on the HSI or to show the distance to the other beacon. This instrument also shows your speed towards or from the beacon (not your groundspeed: Only the component of your groundspeed that is on the line between you and the beacon), or the time to go to the beacon in minutes at your current speed.

The CDU on the central console allows you to create a simple route from one airport to another.

To create a route:

This activates the Route Manager, which you can of course still control with the generic Route Manager dialog.