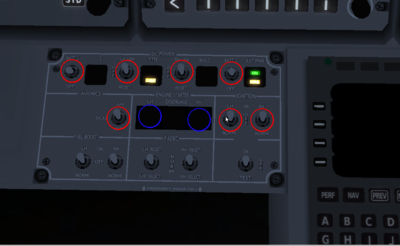 In order to effect the initial speed reduction, place the throttle in idle. As you deploy the larger flaps levels (15+) the aircraft can slow down quite quickly, and you will have to carefully use throttle and elevators to avoid a dramatic loss of airspeed and stall. Particularly for the full flaps extension it is very difficult to maintain sufficient airspeed to prevent fast descent so deploy these only when you are really close to the runway. 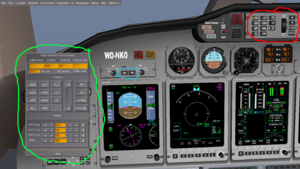 As of version 2.12, the autopilot appears to still have some stability issues, and using either the horizontal localiser or glideslope locking of an ILS signal caused the autopilot to put me into a highly unstable situation (extreme bank angle, upside down), although on the forum I have read of others who have not experienced these difficulties and apparently have carried out semi-automatic landings with the Citation X autopilot. If you encounter instability in any other autopilot mode you can try to turn off auto-coordination (i.e. do not use option --enable-auto-coordination option, which links rudder to aileron movements). Also you must only engage the autopilot from a stable situation, i.e. level or small bank and pitch angles. Please note that I have no knowledge of the internals of the autopilot, so some of the information below might be inaccurate

Before the flight you should set the route in the route manager. In the explanation it is assumed you are familiar with basic autopilot operation in the Cessna, although the Citation X autopilot differs in many aspects. This description is not an exhaustive description of the autopilot modes, but rather a summary that should be sufficient to get you started.

The autopilot can be controlled either from the unit at the top of the instrument panel (marked in red), or from the dedicated GUI menu F11 (marked in green). The keys in the cockpit will light up according to which autopilot mode you are in - no direct visual feedback is associated with key presses in the GUI window but the actual mode is shown in the top of the window. The current horizontal and vertical mode are shown in the top part of the GUI window as well as in the top of the primary flight display (PFD, the left glas panel on pilot side).

The CO and YD buttons are active buttons in the cockpit but do not seem to have any effect.