Martin and Torsten started a project to convert a real Cessna 172 (1978 F172N to be precise) into a static simulator for presentation at LinuxTag and FSweekend.

The first step was a ferry-flight piloted by Martin to get the aircraft closer to its final destination where the conversion will take place. Some images of the arrival at the small airstrip of EDHW (Wahlstedt, Germany) can be found here.

People with a weak Internet connection may encounter broken Git downloads which forces them to re-download all again. You can download the fgdata.bundle file (3.3 GByte as of 07/01/2011) as one big file with any downloader tool (partial downloads are supported) and extract a local repository from it. This allows you to do "git pull" as usual. There is also a tutorial available on how to verify the download.

It is currently in early production (pre-stable) and may have flaws here and there, bug reports are warmly welcomed! (Development thread

The Messerschmitt Bf 109 now has a bump- and specmapped 3D model, a revised FDM and an improved 3D cockpit with functional controls. Apart from that, the logo selection system has been added, along with some new liveries. The throttle now sets the desired manifold pressure and maintains it, even with changing altitude.

Thanks to a report at the FlightGear forum

, Gijs found out that there was a (eternal) fuel-leak in the 744's fuel system. This was quite a problem for long-haul flight lovers, as it severely limited the aircraft's range.

James started to work on extending navigation display (ND) functionality, which is important for many modern glass cockpits. A prototype version derived from the existing weather-radar instrument was created, and based on this a more complete, style-able version is being created which will appear in Git once the tree opens for new development. The instrument can display route, waypoint, navaid and traffic data, using symbols supplied by the panel developer, and with control over text labels and colors. The goal is to be able to approximate most real-world displays of this type closely, but not necessarily supporting every feature!

Longer term, James hopes to integrate the existing weather-radar instrument with the current environment code, and to create a similar instrument modelling the EGPWS terrain display layer, which can be selected in many navigation displays. 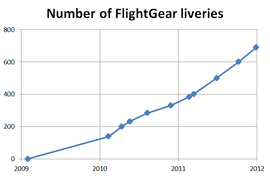 Gijs started modeling one of the highest, fastest changing and most interesting skylines in the world: Dubai's. The former village in the desert is nowadays home to the tallest structure in the world, the largest shopping mall and it has more supertall skyscrapers than any other city. A perfect city to discover by C172p, or one of the helis. With a great deal of challenging landing spots for the latter vehicles.

It is hard currently to find any high quality videos of FlightGear (with the exception of Oscar and Skyop's channels of course), especially with the most modern features, crisp graphics and based primarily on Civil aviation - which other mainstream Flight Sim users seem to do well. It is a personal ambition for the channel to greatly improve the popularity of the sim through various media, including audio reviews, Git update insights, tutorials, etc. Few videos have been added as yet and no reviews or anything other than test videos. But it's already worth to check out the channel at http://www.youtube.com/user/flightgearuk.

is still the place to be when you're looking for support; the facebook page should be seen as a way to provide a periodic dose of what's new, cool or fun in FlightGear.

The Flightgear Rotor Club is kicking off its 2nd multiplayer event on July 2, 2011. This month's event is a Combat Search and Rescue scenario, which involves going deep behind enemy lines into Laotian territory to rescue two downed airmen.

for more information about the event.

BRT Virtual Airlines is proudly announcing that there will be an event!

We recommend FGCom and hope to see you there! We're still looking for air traffic controllers; feel free to apply for that job.

Don't do this at home folks