Welcome to the second edition of the FlightGear Newsletter. In this issue, we have a new GA aircraft in the hangar, a report from LinuxTag 2009, a description of a Tornado simulator, and some new custom scenery around Innsbruck, Austria.

The level of detail is very impressive - you must prime to start the engine (making sure the mixture is set), the sound varies depending on whether you've got the window open, and the doors slam shut. All in all, it's a great polished aircraft, and a fine addition to the hangar. 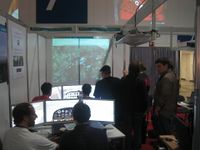 Innsbruck Gets A Face Lift

Custom scenery for the area in and around Innsbruck, Austria, is now available for downloading. The scenery currently covers a 1x1 degree area containing parts of Austria and Germany, and makes use of accurate data from the Corine Land Cover, and Open Street Map projects. Three airports lie within this area, Innsbruck LOWI towards the south western end in Austria, and EDHR + EDMK on the northern end in Germany. See the forum topic here

for more details, pictures, and links to download the scenery.

See herefor a route that will take you on a nice tour around the scenery. The route starts and ends at Innsbruck LOWI, with visits to Lake Walchensee, Tegernsee, and Achensee. I recommend an amphibious plane such as the De Havilland Beaver on floats (--aircraft=dhc2F), so you can make stops at these beautiful alpine lakes and enjoy the view.