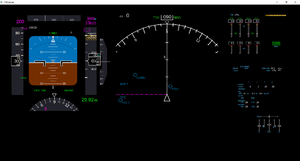 FGQCanvas is a Qt-based remote canvas application for FlightGear. This app can connect to a FlightGear instance which has the built-in HTTP server enabled and display any canvas in real-time at any resolution and/or relative positioning.