The main feat of the NavDisplay framework, and even MapStructure, is not so much its design (sorry, P. ) - which isn't particularly "standard" or even elegant - the main accomplishment is its loose coupling, i.e. the decoupled nature of these modules makes it possible for people -who are interested in very different aircraft, avionics and use-cases, to still collaborate effectively, simply because things are so flexible. So these two "frameworks" are primarily collaboration enablers, because people that would normally not collaborate can all of a sudden easily work on a common code-base pretty easily.

People doing modern MFD-style avionics or any kind of mapping/charting displays should really have no reason NOT to use these frameworks - if something is missing, extending the framework is simple enough, and it means that your work is going to be used -and even maintained- by a number of contributors who have a track record doing similar stuff.

Obviously, there are quite a few other examples of great avionics developed in Nasal/Canvas, particularly the Avidyne Entegra R9 - but as long as those are non-generic and use-case specific (e.g. single aircraft), it is unlikely that fellow contributors will step up to help maintain such modules over time unfortunately. And re-implementing existing instruments on top of NavDisplay/MapStructure is a win/win for all parties involved, because there's less aircraft-specific code involved at some point.

The whole MVC separation established by the ND/MS frameworks allows people to collaborate despite possibly working with very different aircraft and instruments/avionics, which even includes people who don't do any aircraft/instrument development at all, but "merely" GUI dialogs like an instructor console for example. 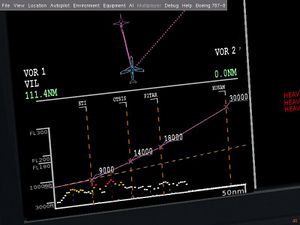