There are a lot of big projects that are currently under way - see the January newsletter for details for some of these projects. A lot of work (but not all) is already on the next branch (i.e. nightly builds). See the July newsletter for info on an experimental rendering pipeline that has just been added to the next branch, as well as a new project to add Virtual Reality headset support to FlightGear.

There is a lot to check out if you are curious - power users can run multiple installs of FlightGear in parallel. To contribute to any aspect of these projects, get in touch via the "fg-devel" mailing list.

Nightly builds with some of the big changes are available at download.flightgear.org as usual.

Nightly builds and the "next" branch are building towards a "development preview" release currently planned for sometime in the 1st half of 2022 - see the April newsletter. As usual, plans can change and progress depends on the availability of contributors (including testing).

Please report bugs and issues via the sourceforge tickets system if you come across any on the next branch, or LTS.

New features on next

The scenery generation part of World Scenery 3.0 (WS30) is at an advanced stage.

StuartB has written a guide on how to build WS30 scenery - see the Virtual Planet Builder (VPB) page. See this download for a sample of the latest quality scenery from mid October - covering most of the United Kingdom (you can start at EGPH).

People interested in generating WS3 scenery for the WS30 world build should start learning the process of using Virtual Planet Builder. There are no Windows binaries at this stage, so VPB needs to be compiled. This includes people who are working on custom landclass and elevation data for their home regions, and areas of interest. The resolution or output format may change for the final world-build, but the process of getting/preparing/cleaning data, and putting it into the tool chain is roughly the same.

Building scenery with VPB is extremely fast compared to the old TerraGear. Scott was able to build the whole of UK in a matter of hours - see his post. A group of volunteers should be able to to do the entire worldbuild.

There is a vast improvement in the general availability of terrain elevation and landcover data in 2021, compared to the very old WS2 build.

As always with volunteer projects, progress depends on the availability of volunteers including testing, and plans can change in various ways - so there is no timeline. FlightGear development is coordinated via the "fg-devel" mailing-list and people who want to get involved with any aspect of the VR project should get in touch via the mailing lists.

Julian Smith is working on the ability to natively render and output videos, without using 3rd party software - see the video encoding wiki page. He has created the functionality to add a timestamp to each rendered frame so that FlightGear's exact frame rates and spacing are reproduced - this will help with performance profiling and debugging. He has also created a 'fixed dt' mode which changes simulation times so the time between frames is constant, so that videos can be rendered perfectly even on an extremely old machine. See the mailinglist thread for more information.

Wayne has created a video of the Compositor lighting in the C172 SP retrofit with FG1000 glass cockpit. This needs the next branch of FlightGear. The C172 is the aircraft shipped with the base package of FlightGear - over 900 aircraft are available with a 1 click install in the launcher from the FGAddon hangar, and a lot more are available in other hangars or git repos.

Franck has been doing a overhaul focusing on modelling and animation, with the intention of getting it out by Christmas 2021. He has already released a version on sourceforge - as an early Christmas present for those wanting to test the in-development version. See the forum thread for more information and downloads.

This is a large overhaul done over a long time, and you can see updates and progress with time in his youtube channel.

). This is similar to how the FlightGear virtual environment and the JSBSim driven Zivko Edge 540 is used to introduce pilots to the Red Bull Air Race track, as well as planning and preparing the races. There is some work being done on interfacing the Lazarus Mk2 with consumer exercise bikes as these types of aircraft are pedal powered - this can be used by people at home wanting a visualisation as they exercise.

See the forum thread for more information on the project.

You can see videos of the real version on the Human Powered Aircraft Society youtube channel.

Wayne has created a video of the Millesime 1 from Bordeaux University, another human powered aircraft.

Adriano has a video of the latest development on the FIAT G91R1B, showing Compositor lighting at night:

G91R1B for Flightgear: Take-Off and Landing in the Dublin airport from to rw 10. By Adriano Bassignana.
G91R1B for FlightGear: Showing a test of automated external illuminators, which can track the aircraft as it moves. These will be part of the ground accessories.

FGUK have finished updating their website, including the hangar which hosts a lot of aircraft. The website was offline while the new one was being worked on.

The hangar is available at: https://www.fguk.me/hangar-main/

The C-17 that has been lost in the Bermuda Triangle hangar has been found and rediscovered!!!!! - C-17 Globemaster III for the latest version (direct link to hangar)

The C-5 Galaxy is now available. According to the repository comments and commit descriptions as well as the README, the aircraft should be able to fly.

flc972 has released a detailed version of Gregorio Luperon International Airport / Puerto Plata Airport (MDPP) as a custom scenery . This airport features detailed modeling of interiors, night lightmaps, ground net and animated jetways. It is located in the Dominican republic on the island of Hispaniola in the Caribbean.

See the forum thread for more information and download.

D-Sven has released an update Frankfurt am Main (EDDF) and other airports around Frankfurt including Frankfurt-Hahn Airport (EDFH) and Kassel Airport (EDVK) - see forum thread for more information and github download (direct link). EDDF includes modelling of buildings surrounding the main terminal, which are lacking in TerraSync. It's part of his ongoing project. 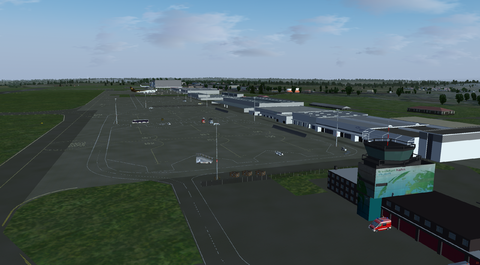 The core team needs help from Windows users able to maintain a good working Windows build. This process already exists to support our Nightly and Release builds, but we are seeking additional help to keep it in good working order. The ability to compile FG from source and some Windows batch scripting is a required skill. If you are willing and able to take up this role, please reach out to James Turner (mailing list), or get in touch via the forum [8]

There has been a lot of growth since the last wish list object had been added to FlightGear. The list is available here. Landmark Wish List

The Wednesday-GA flying is still alive! Everyone welcome! Info in the multiplayer section in the forums :)

Thanks for reading FlightGear Newsletter November 2021!