Carrier over MP is available in FlightGear 2.0.0 and later and makes it possible to command the Nimitz and other aircraft carriers. Other pilots on the multiplayer network can elect to be able to see and land on the carrier controlled by the MP carrier player.

NB: It is not enough that you can see carriers in AI mode. You have to have MPCarrier in your aircraft path.

This can easily be accomplished by using the FlightGear_Qt_launcher directly accessing FGAddon and downloading the MP Carriers.

Commander/Captain of the Carrier

(same for Clemenceau and Vinson).

Command the Nimitz for MP operation:

Here are some principal tips:

Things will work without any special configuration.

By default Flightgear uses Nasal to periodically change the AI carrier's velocity to make it approximately follow the MP carrier.

This can work much better but requires that MP motion is smooth, e.g. by using Real_Time_manual or SimpleTime - see menu File/Time Mode.

NB: You need to know which callsign and which carrier model to use.

Make sure to enable the AI scenario for the corresponding carrier (e.g. nimitz_demo if the model is the Nimitz).

The easiest way to configure your FlightGear session for an MP carrier is to use the Launcher like in the picture (the model is the Vinson and the callsign is OPFOR21 in the example). 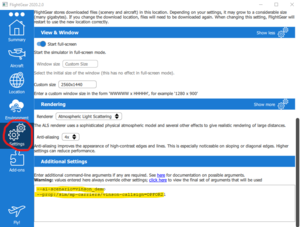 From the Command Line

It is also possible to select MP carrier players from the command line using the following --prop: argument (change "nimitz" in 2 places to the carrier actually in use):

For the Vinson it could e.g. be:

There is no need that the callsign reflects the TACAN setting - it is just a possible pattern do make it easier for others to use.

An alternative way to enable MP control of a carrier when on the multiplayer network use the MP carrier dialog available from Multiplayer->"MPCarrier selection" to select which MP carrier players you wish to see. A pre-requisite is that you already have the parameters set-up as per above.

The MPCarrier selection dialog. The user 'Nimitz' is currently selected as the controller of the carrier Nimitz.

As a pilot you have to run by the books: