Due to two recent developments, large parts of the FlightGear project are moving. The first is the announcement that Gitorious.org will shut down in May this year (read more) and the second is that Google Code will shut down in 2016 (read more). These developments have affected the source code (SimGear and FlightGear), bug tracker, and TerraSync SVN repository are moving. In addition, just previous to these developments, fgdata was split (see below for details).

All repositories of the FlightGear project have been synchronized to SourceForge.net[1]. No more work should be pushed to Gitorious any more. Except for fgdata, all others are mirrors of the original and a new clone is not necessary. All you have to do is update the URL(s) of your remote(s) and pull as usual.

<protocol> can be either of git:// (read-only access) or http:// (read/write access). See http://sourceforge.net/p/flightgear/_list/git for a list of what <sub-project> should (they should also be lowercase).

Several (but not all) of the Git related articles on the wiki have been updated, including FlightGear Git: data developers.

To get re-added as a contributor to the FlightGear repositories, you will have to do the following steps[2]:

The bug tracker has moved to http://sourceforge.net/p/flightgear/codetickets/[3]. All old issues/feature requests have been preserved. The wiki template {{Issue}} has been updated (diff).

TerraSync is yet to be moved as of April 2.

After lots of hard work by Torsten D, a new, more compact fgdata repository (base package) has now been created. Located at http://sourceforge.net/p/flightgear/fgdata/, this new fgdata has had all aircraft (except for the C172p and UFO) stripped from it, as well as the histories of the Scenery, AI, and Models directories[2]. This has reduced its size to about 1.3 GB[4]. As almost all commit IDs have changed, you will have to get a fresh clone of this new fgdata[2]. See above for information on getting re-added as a contributor.

Development of a new GUI frontend for FlightGear has started, with the aim to replace FGRun and eventually the PLIB PUI. James Turner is currently prototyping this new launcher, based on Qt Quick, at the suggestion and encouragement of Curt, Torsten D & others[7]. There will also be the HTML5-based GUI called Phi, which is being developed by Torsten D.

The reason for the announcement is that this would overlap some areas other developers are working on. This will hopefully avoid others unnecessarily expending energy on areas that might be affected.

Note The parallel development of HTML and Qt-based UIs is happening by intention and is not the result of discoordination[8]. It is likely both will use a common service layer to provide necessary data[9]. 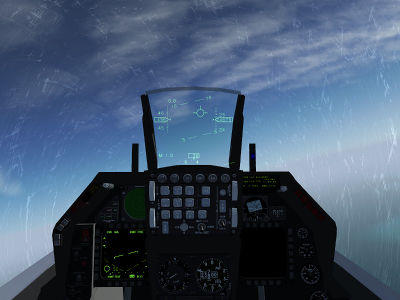 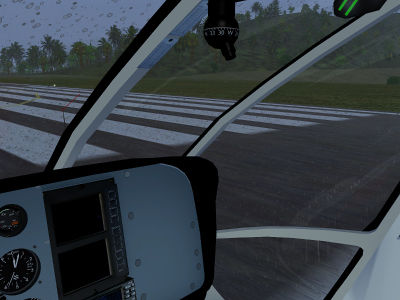 Both frost and the correct splash dynamics of the raindrops need to be modelled by the aircraft developer, as the shader cannot have get the required information. See ALS glass effect for details.

Do you like the way shadow and light move across the panel in flight when using Rembrandt? ALS is now able to do the same and more using the new model-interior effect which utilizes a cubemap representing the cockpit layout – at hardly any framerate cost. The effect is able to draw very sharp shadows without flickering, semi-shadows, dirty or tinted glass, and even render caustics from light refracted on curved glass surfaces. 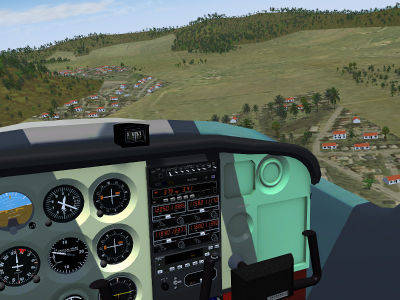 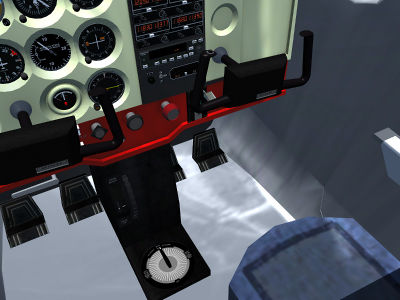 Independent of the FlightGear space program, efforts are underway to provide the Space Shuttle with a flight dynamics model which has the characteristics of a real spacecraft and performance close to the real Shuttle. 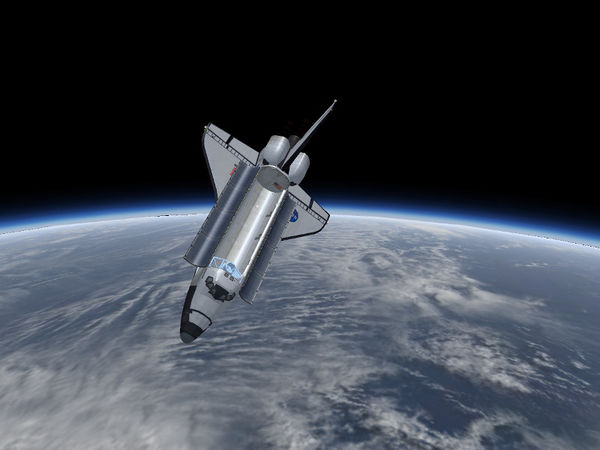 Currently, a plausible behaviour of the SRBs

has been implemented. Only the main engines respond to throttle, but SRBs burn until exhausted when ignited. The ascent path is controlled by thrust vectoring on both main engines and SRBs. Callouts for important ascent milestones are implemented, such as thrust bucket[10], SRB separation, orbital insertion, MECO, etc. Balancing the top-heavy external tank to a good orbit is moderately challenging. 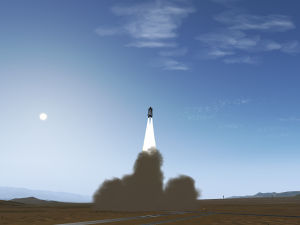 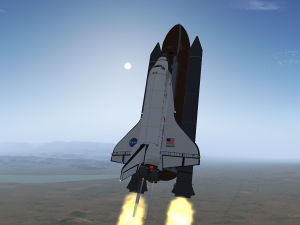 The best visuals can be obtained by switching to the Earthview orbital rendering engine at high altitude: 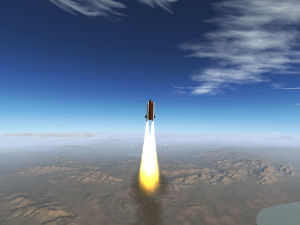 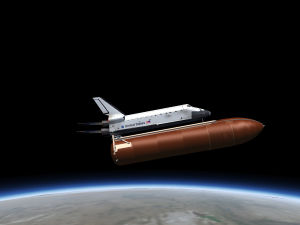 Stay tuned for more! Modelers interested in realism are very welcome to come aboard and help.

Announced as beta in January and released as stable early February, ATC-pie has happily served a few ATC sessions in its first month of existence. In particular, it seems to have found comfortable homes for adoption in EKCH and LFOK already. Meanwhile, progress was made on its development to reach the important milestone of general and continuous ATC coordination on FlightGear with the handover feature, released this month.

Beginning to populate the network with a new program without dividing the MP network (especially controllers) was a challenge as interesting as necessary. Collaborative work made this possible, enabling both OpenRadar and ATC-pie users to exchange strips in a transparent way, regardless of their software choice.

A new, more detailed version of the C172p is currently being worked on by wlbragg, gsagostinho, thevirtualfer, ludomotico, onox and others. It brings amazing new textures, controls, switches, and systems! Below are some of the results of their work: 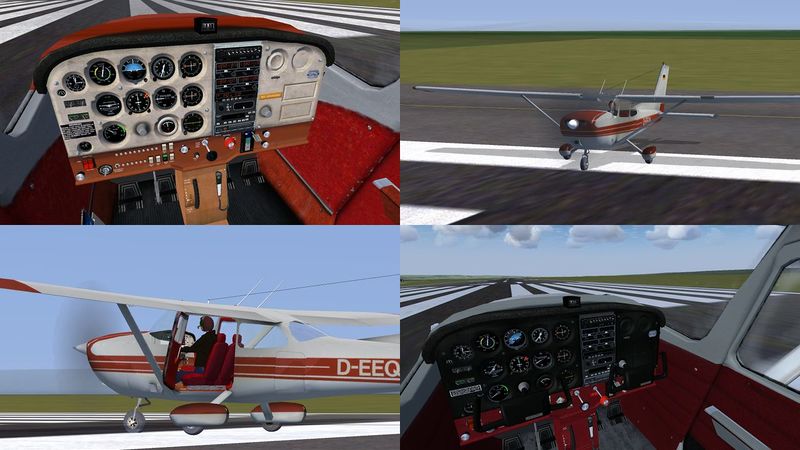 Elgaton has released the complete 2D layout for the Verona Villafranca Airport (LIPX) and submitted it to the Airport Scenery Gateway. See the forum thread for download links. 3D buildings will be added in the coming months.

Project Venezuela is on the way, with a team of users, headed by legoboyvdlp working on several airports, namely SVMI and SVVP. Their progress can be downloaded at their GitHub repository. Note: legoboyvdlp currently on vacation, so P.Ven. is on a hiatus until June.

From the SMAAF GAMEZ channel. 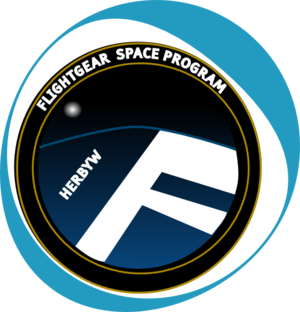 The Space Shuttle can be downloaded from the GitHub repository either in a ZIP file or by cloning.

As an add-on also you can fly our Special Cargo Transport Missions with the heavily updated An-12, An-22, and An-225.

If you want some graphic elements for your FlightGear-related site (for example a hangar or YouTube channel), please feel free to visit FlightGear logos for a repository of logos. And if you have some art skills, please don't hesitate to contribute with your own design creations.

The FlightGear project always needs screenshots, which show features that were added since the last release. These should be of good quality, especially in content and technical image properties. It is therefore recommended to use the best viable filter settings (antialiasing, texture sharpening, etc.). More info at Howto:Make nice screenshots.