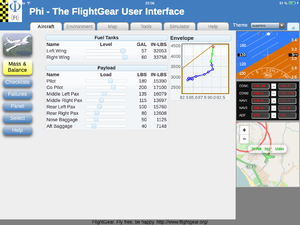 Phi is an HTML5/JavaScript/CSS based multi-platform user interface and instructor station. Phi is capable of being run on any device that has a Web browser or Web apps like Apple's iPad without the browser decorations.

While working on the new radio/atis implementation, I rediscovered the internal httpd (aka web-server) to browse the property tree. It's much easier to have multiple browser windows open and point to various locations in the property tree than to reopen the internal property browser and navigate to the locations after each sim restart. After a while, I got disappointed by the functionality, look, and feel of the http property-browser. So I had a look at the code to see if it could be improved. I quickly realized, that the implementation was simple but not scale-able. I looked for alternatives already available on the GPL market. I found Mongoose as a well maintained, feature rich and yet simple implementation of a web server and started to embed that into FlightGear.[1] 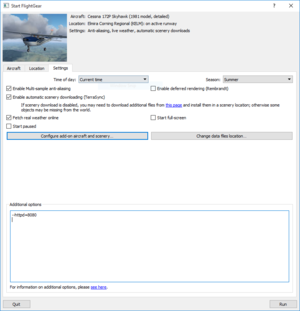 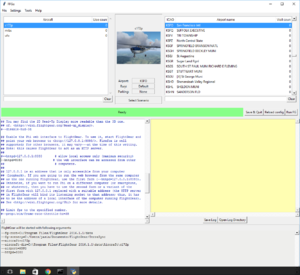 Once FlightGear is up and running we can access the Phi user interface from the main menu in FlightGear. Select Equipment > Map (opens in browser) or launch a web browser and enter the URL:

Phi is at foremost a multi-platform user interface that has two-way data binding with FlightGear via the internal HTTP web server. This allows Phi to be a fully functional user interface that can directly control FlightGear. The following list is a set of features that are currently implemented and working.

This is where you will find all things related to the currently selected aircraft in-sim, if available.

Loads an OpenStreetMap as the background and updates your current position around the world in real time while you fly. Allows one to not only track current flight, but the ability to drag the plane icon around the map which will instantly update FlightGear with the new longitude and latitude coordinates.

Things that make for a more realistic experience. Not exactly needed to fly a plane, but these tools will add to the realism.

Holding Pattern
A tool to help one understand how to enter the holding pattern. Enter in the Heading and Inbound Track and the diagram will show you visually the Holding pattern.
Wind Calculator
Vertical Navigation (VNAV)
From my understanding not anytime soon, needs FG integration first
Stopwatch

You find the property plotter here:

You need some background knowledge of Knockout.js (for HTML data bindings) and Flot (for chart plotting). Let Torsten know if you need some more information.[3]

You can access the new screenshot handler after starting FlightGear per instructions in Phi#Usage.

Send PNG instead of JPG (JPG is default)

Send a PNG screenshot from the window named WindowA as defined under rendering/camera-group/window/name in your screen configuration.

Can be used by FFMPEG to directly encode various video formats.

Compression level for PNG is hard coded to 9 (highest) and JPEG_QUALITY hardcoded to 80. These seem to be a good balance of performance vs. quality

The web-based EFIS is created from a scale-able vector graphics (SVG), is animated by JavaScript and driven by properties from FlightGear over websockets. The same SVG files that are used for the FlightGear internal canvas based instruments can also be used for the browser based display, so both instruments (that of the 3d model and that in your browser) look 100% alike. Web-socket properties are exchanged at frame rate making animations as smooth as they can get. Because it uses SVG, instruments are always rendered at the highest available resolution of the device without scaling artifacts.[4]

The most exciting part is, the web based instrument runs on any modern platform without the need to install any spooky software. It also runs flawless on my Android phone and tablet and of course in a standard browser (Firefox and Chrome tested). On mobile OSes, you can add it to your home screen, making this a full-screen web-app to get rid of the browser navigation and toolbar (like shown in the screenshot). There is not much required on the FlightGear side - recent 2016.1.1 has all it needs. Workload for FlightGear is negligible, for the current EFIS, on page load a few hundred kilobytes of static files are transmitted and once fully loaded, 10 (ten!) properties are observed and transmitted on change. All the rendering takes place on the web browser's device.[4]

You can see a FlightGear instance on the top right of the big monitor and Firefox on the left showing the EFIS. Both run on the same computer. Below the monitor are an old iPod touch (left) and a Nexus 7 (right), both running the EFIS as a web-app in full screen mode connected over WLAN. The EFIS in the FlightGear window is based on Canvas/Nasal. The other EFISes are 100% Nasal free, just HTML/SVG/CSS/JavaScript[5]

I use Inkscape to draw the SVG files. The objects to animate are selected by their id attribute, so you should set a reasonable name for those. To get proper scaling of the SVG files, you need to set the viewBox: width, height, and preserveAspectRation of the <svg> tag element. It should be also possible to draw SVG files on the fly for example from svg.js and animate this as well. Not much has been on this front.[4]

The artificial horizon example is a fat free, stripped down basic idea of a web based instrument for Phi.