2020.1.x is a preview release including new features that that will be in the next stable release, but receive less testing and some aircraft maybe incompatible.

The work-in-progress state of the Compositor is bundled as an additional binary for testing on a wide range of systems. Read sections below for more info and how to turn on shadow mapping in the ALS pipeline.

The Windows installer will currently place a link for the compositor under the Flightgear 2020.1.1 folder in Windows start-menu. This link will activate the low-spec pipleline that replaces the old default renderer. To specify the pipeline, for example to get the ALS pipeline, use the following command-line options:

Keflavík is the featured airport for 2020.x

Keflavík International Airport, ICAO code: BIKF, is the largest airport in Iceland, located in Keflavík near the capital Reykjavík in the south of the island. The release includes the terrain for Iceland.

Vanosten has released OSM2City output for Iceland in the form of buildings, roads, pylons, etc. This can be downloaded and installed. There are two types of Buildings included with separate folders that can be renamed to select building type:

Iceland is one of the more developed regions of Flightgear currently, and features detailed depiction of the striking volcanic terrain of the world's youngest country with overlays as well as several volcanoes including Eyjafjallajökull which caused severe disruption to aviation in 2010.

The compositor build is available as a second binary: bin/fgfs-compositor.exe.

Nighties will now build towards the stable release planned for sometime towards the end of the year, 2020.2.

The release candidate for the 2020.1 release has been tagged. Release candidate builds should become available for testing at download.flightgear.org sometime in the future.

Nightlies, available now at download.flightgear.org, will build towards the release after 2020.1, which is planned to be sometime towards the end of the year.

Tim/MrChillstorm has made a video showing progress so far on porting ALS effects and shaders to the ALS pipeline of the Compositor. The ALS pipeline has new shadows for objects like buildings via shadow mapping. There are default shadow maps for cockpits that are slightly slower and lower quality than the ALS version. There are similarly slower shadows for aircraft, that do not have the faster versions implemented.

For now you can control shadows and map quality by the following command-line options:

These options can be also be set in the settings page > additional settings section of the in-sim launcher.

The addon is being developed by Red Griffin (Antonello Biancalana). It's a candidate for eventual integration as part of the base install of FlightGear.

The Cargo Towing Addon adds cargo towing capability to any aircraft with some XML editing if load points are not present.

The addon is developed by wlbragg (Wayne Bragg) and uses the soft-body rope physics simulation created by Thorsten Renk.

See the Cargo Towing Addon topic on the forum

Aircraft models given to Flightgear by KAITO

KAITO has graciously released aircraft models in various stages of completeness for use by the Flightgear project. Erik has added some of them to FGAddon with a stub FDM to assist discovery by aircraft developers.

See the related forum thread for more info and screenshots.

. The Sea King is originally a Sikorsky helicopter licensed to be built by Westland Helicopters that was further developed by Westland. 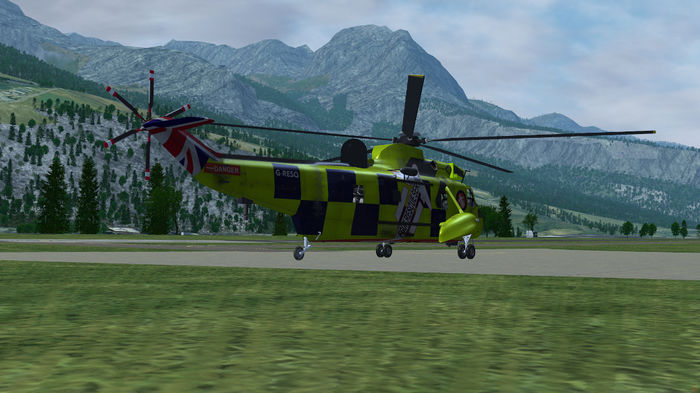 (mostly at high-ish or max settings)

At high graphics settings/resolutions the bottleneck is the almost always the GPU. A 4k (3,840 x 2160) resolution is the equivalent of trying to run four standard 1080p (1920x 1080) monitors with one GPU. Recording videos also slows down performance. The reason why around 60 FPS at 4k resolution (on a top end GPU from the last ~4 years) is even possible is the surgical way ALS creates custom strategies for different cases based on the needs of a flightsim, and the way ALS prioritises GPU cost of features based on overall visual impact, spending a greater proportion of GPU time for features that have more impact generally.

These videos are mostly in WiP scenery missing something things, and don't necessarily have the most busy weather settings (unlike this 4k/60 FPS video showing FPS is mostly unaffected), but the general observation holds.

Merspieler has released a test build of the state of Queensland (QLD).

The Australian Scenery Project is coordinated through gitlab.

See the forum thread for feedback and download (3.5 GB).

Montagdude has released custom scenery for the states of Virginia, Maryland, Delaware, and Washington DC in the USA. The scenery includes terrain elevation, landcover, rivers and waterbodies, some custom regional definitions and some textures, as well as OSM2City output. This custom scenery is a significant improvement in resolution as the USA does not have the high-res CORINE data that Europe does.

See the article on Using QGIS to process NLCD data by Montagdude for a tutorial on how to use new data sources to create US scenery that is on par with the existing European scenery.

See the forum thread for more info, screenshots, and download.

A new promotional video for 2020.1 has been released!

Thanks for reading FlightGear Newsletter April 2020!