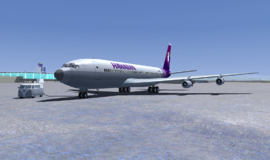 This FlightGear model includes versions dating from 1959 to the late 1970s. Feel the difference between the older Rolls-Royce Conway 508 turbofans engines and the later JT4 engines simply by changing liveries.

The 707-420/430 has a detailed built-in tutorial in German, English, Czech, Portugues and Spanish. You can help translate the tutorial into other languages by visiting our page on github. 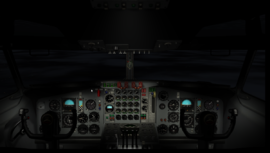 The aircraft's philosophy is based on the WYSIWYG concept. Everything you see on the panels is clickable - and works.

The light effects in the cockpit are made with extra attention to detail, with the aim of giving the user the most realistic experience possible. The hope is that the pilot to feel as if they are actually in the plane itself.

On the other hand, the 707-420/430 is also focused on usability for new users. For example, the generic autopilot dialog has been retained, and an autostart function is available. Tutorials are available in several languages. All this is done with the aim of making things easy for first-time users while also allowing them to learn and have fun. 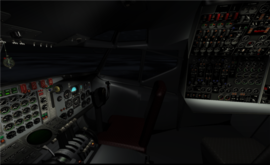 Looking to starboard from the captain's seat

The 707-420/430 has been tested on several platforms, including GNU/Linux, Windows XP to Windows 10 and Mac OS X from FlightGear 2.10 to 2016.2 and GIT, and has passed all tests with flying colors. Over 15 users have helped test the aircraft throughout its evolution. 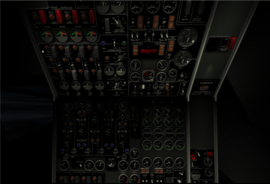 Additionally, members of the beta testing team have visited the German Technical Museum in Munich and verified the model's accuracy. It has been estimated that the 707 certification takes about 400 hours of flight time. We will grant 707 Knight Sky Class Certification to those pilots who reach 400 hours. Additionally, we will be giving away a 707 "City of Friedrischafen" custom set of wings, diploma, and avatar. 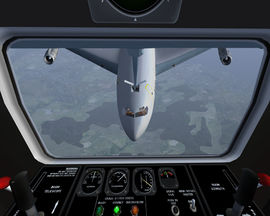 The aircraft has been fully tested and certified. Now it's your turn. Be a part of the legend.