From FlightGear wiki
< User:Ac001
Jump to navigation Jump to search

Its recommended you read the summary and intro paragraphs to the subjects below and familiarise yourself with the concepts and workings (thanks wikipedia and everyone):-

The route is over central London between:

EGLC is unusual as it has a steeper 5.05 degree Glideslope instead of the normal 3.00 degree which makes the approach a bit trickier; ooh and a 771ft skyscraper on the RWY 10 approach path.

This chart is typically found on all approach plates. This is a final approach to RWY 27L, ie right to left. The glideslope is the standard 3 degree.

To "visualise" the enviroment before performing a flight, first presented is a map and cockpit view of two aircraft on two different approaches:

Following is a snapshot of the map and cockpit of an approach to EGLL 27L, the aircraft is a Beechcraft Starship, being flown manually.

The ILS has been selected by pressing F11, bringing up the radio frequencies.

The screenshot below shows the pilots view of the approach. The parallel runway 27R is visible towards the top right. The airspeed it high at 170 knots and as an approach is not good; however this it demonstrates the ILS instruments better. 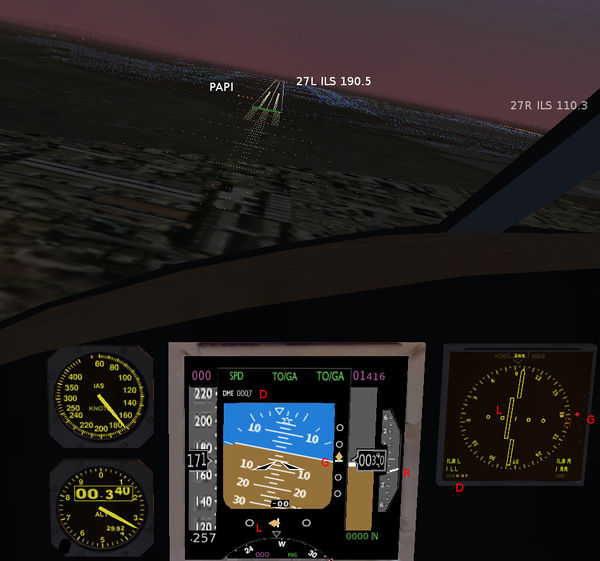 The aircraft is slightly below the glideslope indicated by:

should be higher to be "on" the glideslope.

To correct the position, a normal response would be to just pull back the stick slightly to lower the rate of descent indicated on the right of the PFD.

The aircraft is to the right of the center line and needs to move left for correction. This is indicated via:

To correct, a response would be to use the rudder pedals to correct alignment.

The distance to the DME transponder located near the middle of the runway is displayed on:

This approach is recoverable as the runway is very long and a Beechcraft can travel pretty slow.

Following is a snapshot of the map and cockpit of an approach to EGLC RWY 10. The aircraft is a Citation Bravo, being flown manually at an altitude of approx 2500feet, nose down 5 degrees, a bit fast and 4.3 nm out from the center of runway.

Press F11 on the keyboard to bring up the Radio dialog. 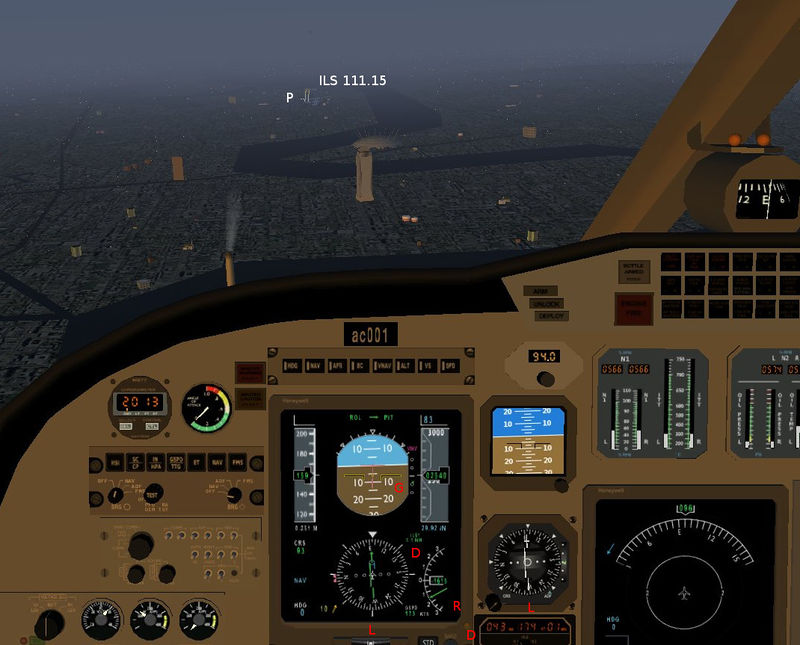 The Millenium Dome is visible behind Canada House just to the right if the approach. Please ignore the smokestack.

To correct this position, the aircraft needs to descend vertically faster to capture the glideslope.

To correct this position, a little rudder to steer to the left then right to align with the runway.

This is probably a missed approach.

Other possible techniques to land such as: 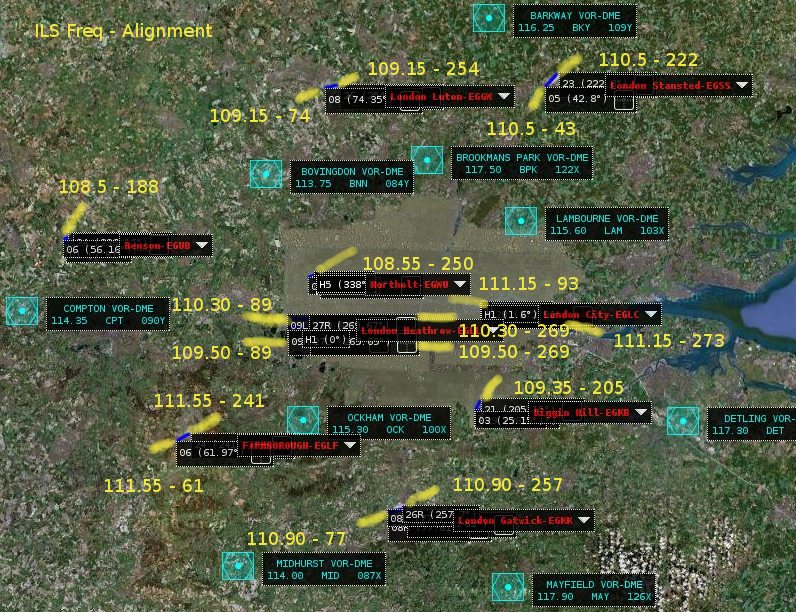 Whilst the ILS is a vital aid in landing, the signals and instrument work all the time, including take off. So for the first flight its recommended you tune NAV1 to opposite runway, and climb the glideslope. Aircraft approaching at the same time would not be a good situation. for example: Taking off from