We will see now the final Burn preparation, the Burn, and the Entry final preparation to be fully ready for the Entry.

We will use from now on the Entry Checklist annotated from here : Flying the Shuttle - Space Shuttle Checklists

As there is still a mistake from my part here, TGO is 5:42 instead of 3 min ish with 2 engines burn (it is what you should see as we are doing a 2 engines burn). 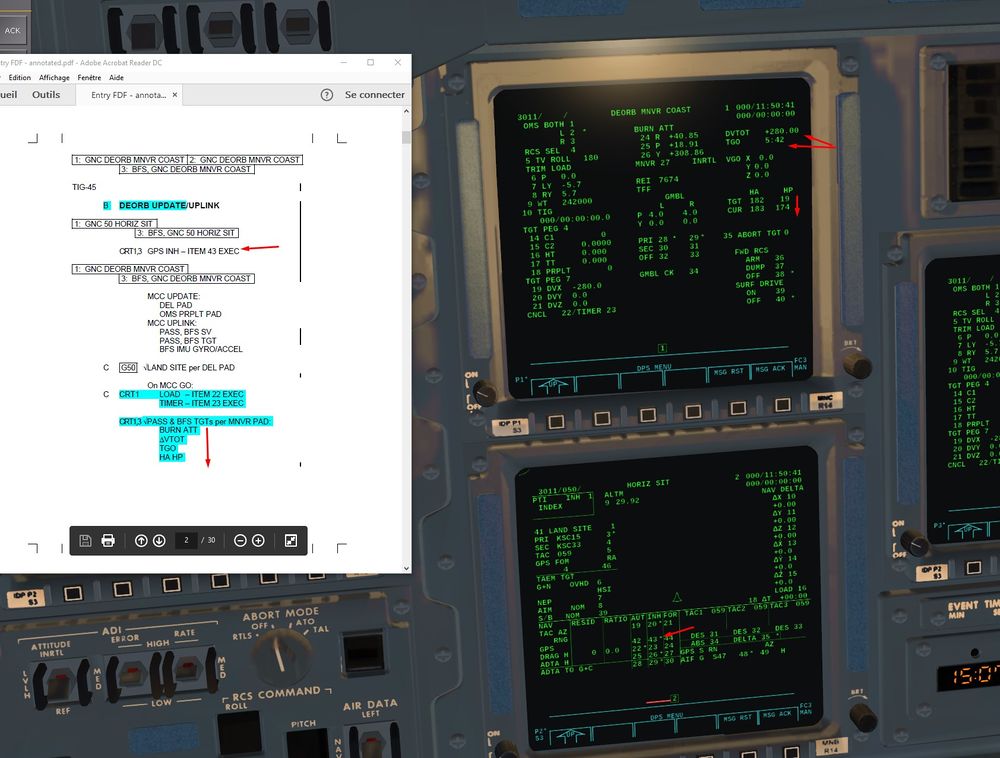 2) We check that nozzles can move freely (Gimbal)

Item 34 A star * appears right of GMBL CK and disappears once the check is completed. 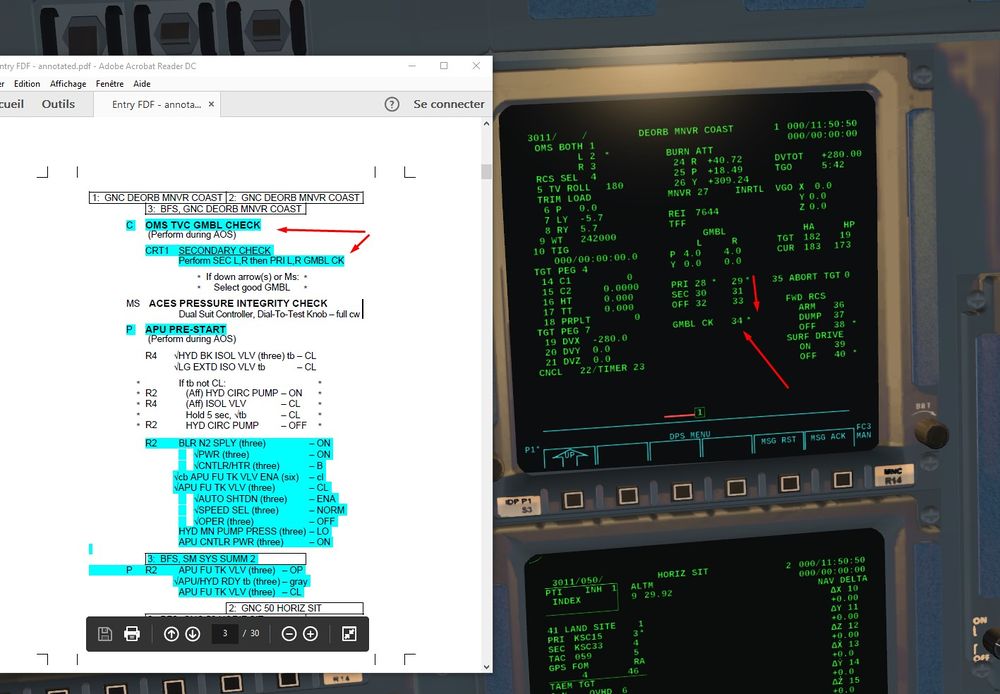 Mainly checks to do

Hyd Pump on Low, APY controller On et Boiler N2 Supply On (Nitrogen pressurizing Water Tanks that will cool down Hydro and Oil from APU gearbox) 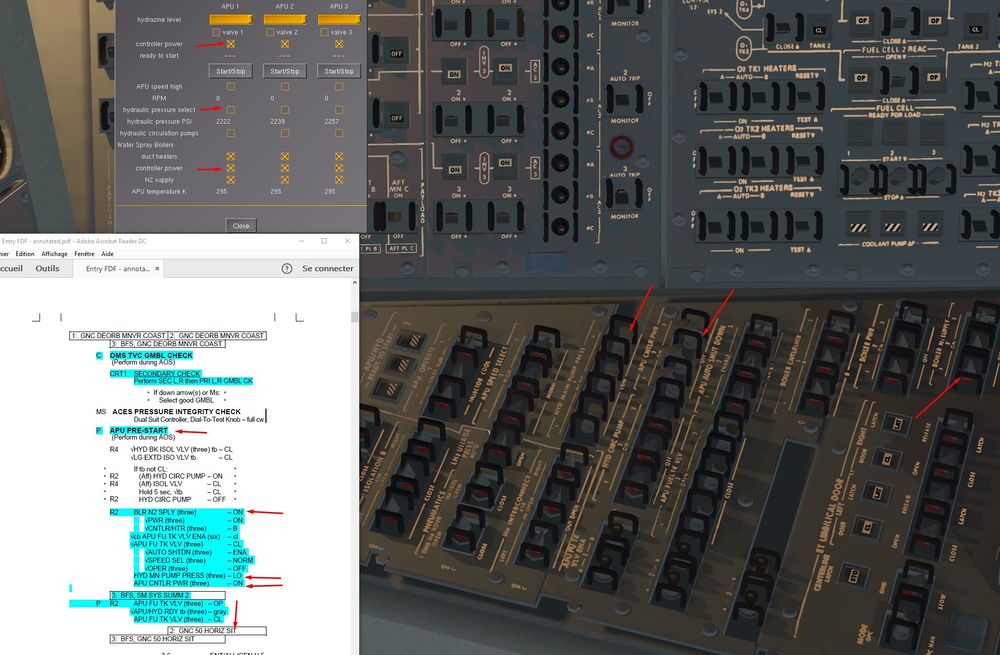 4) We check on Spec 50 the good data and configuration for final entry phase (TAEM).

Normally, nothing to change, just some checks. 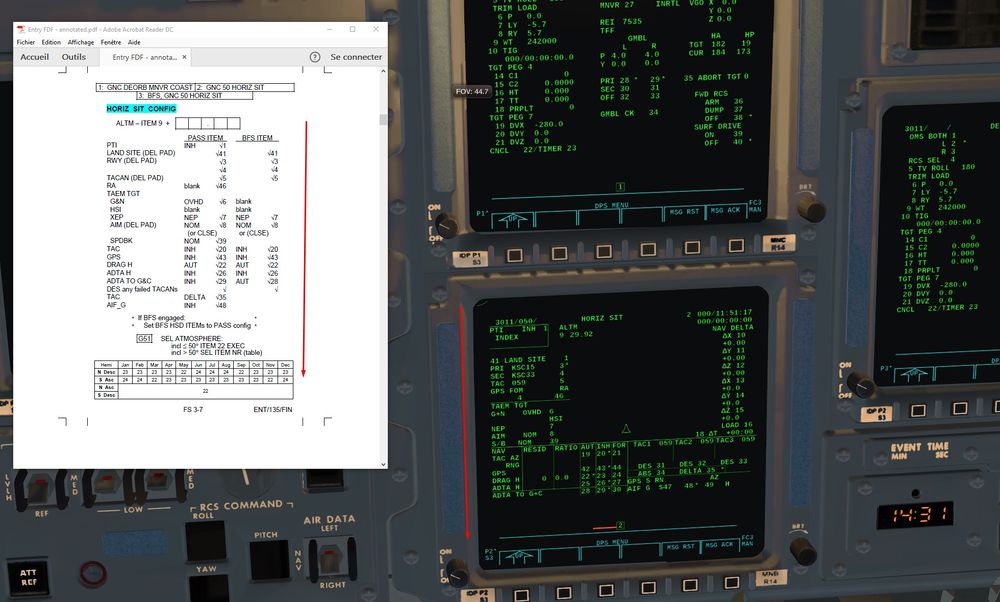 5) One more step to verify burn solution (a bit redundant, but mistakes can happen fast and after OMS ignition, it is hard to recover) 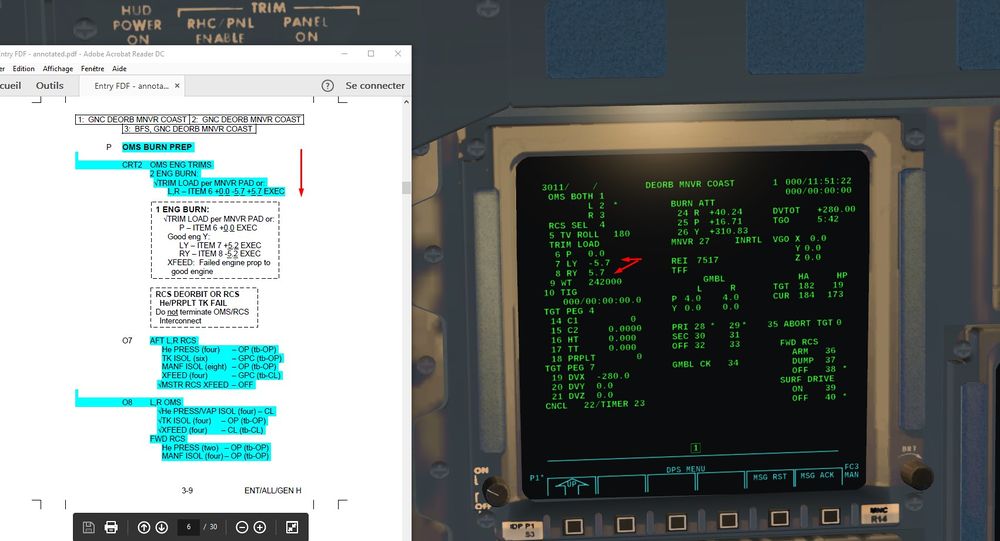 6) We check that the RCS:OMS valves are in correct position

Here, we just have to close the OMS He Press/vapor isol

It allows to isolate the propellant tanks from the Helium tank that pressurizes them during a burn. We avoid like that to loose all the Helium in case of leak in the pipes between two OMS burn. 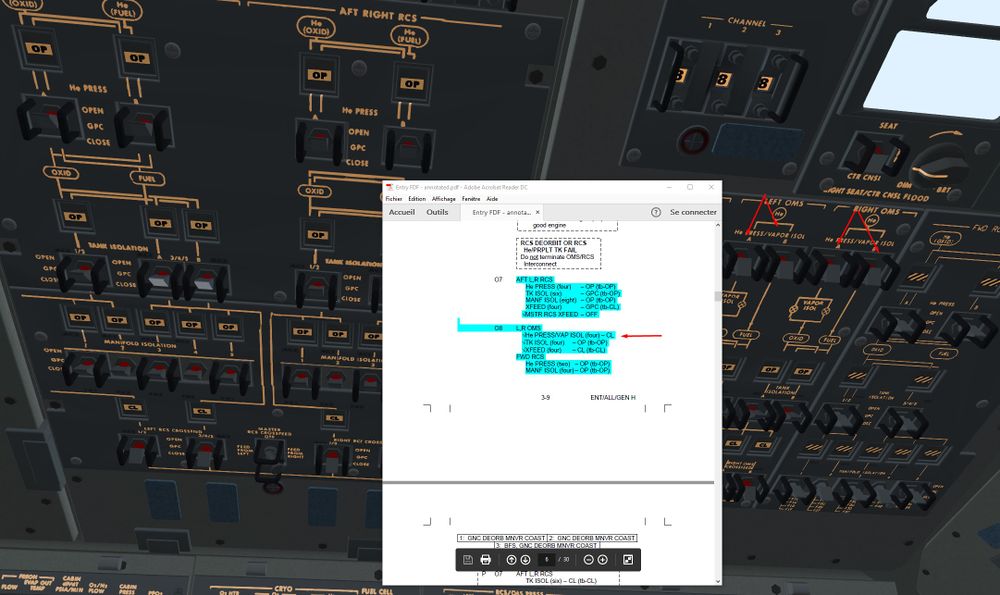 7) We close the ventilation doors ( 10 around the Orbiter, linking non pressurized part of the Orbiter to the exterior pressure condition) 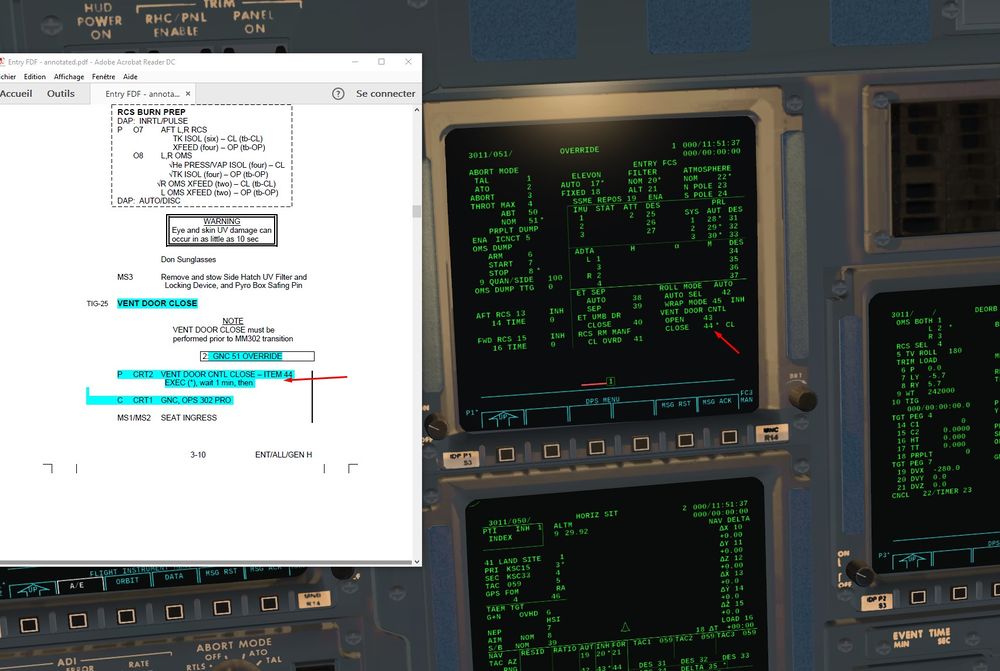 We transition to OPS 302 PRO, similar page than previous one used for the Deorbit Burn.

Burn solution is saved during the transition hopefully. 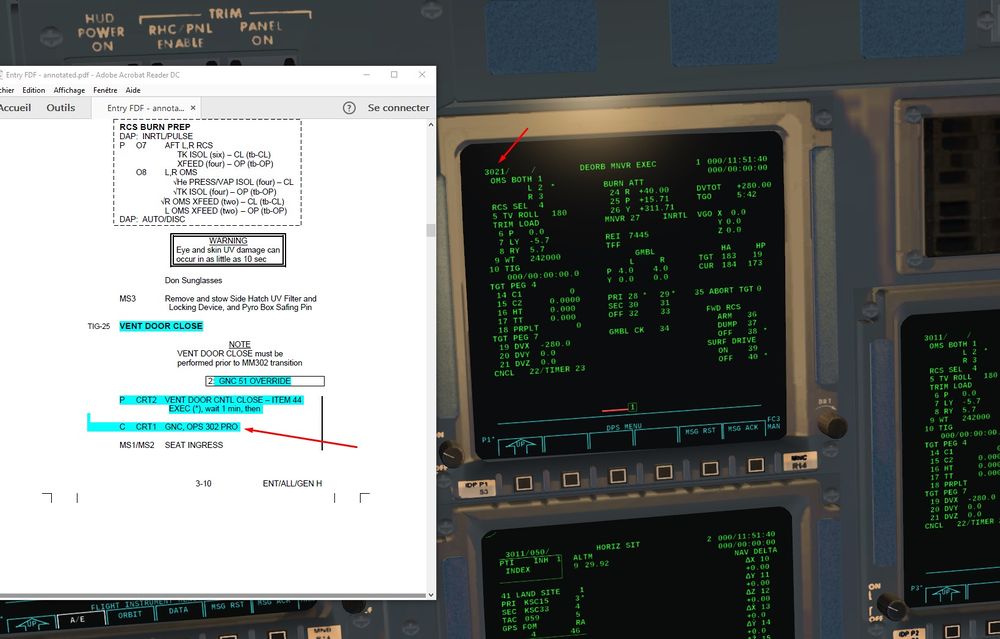 8) We will now put the Orbiter into the correct Inertial attitude for the burn.

It will put the Orbiter in a good burn attitude and update that one until we perform the burn. 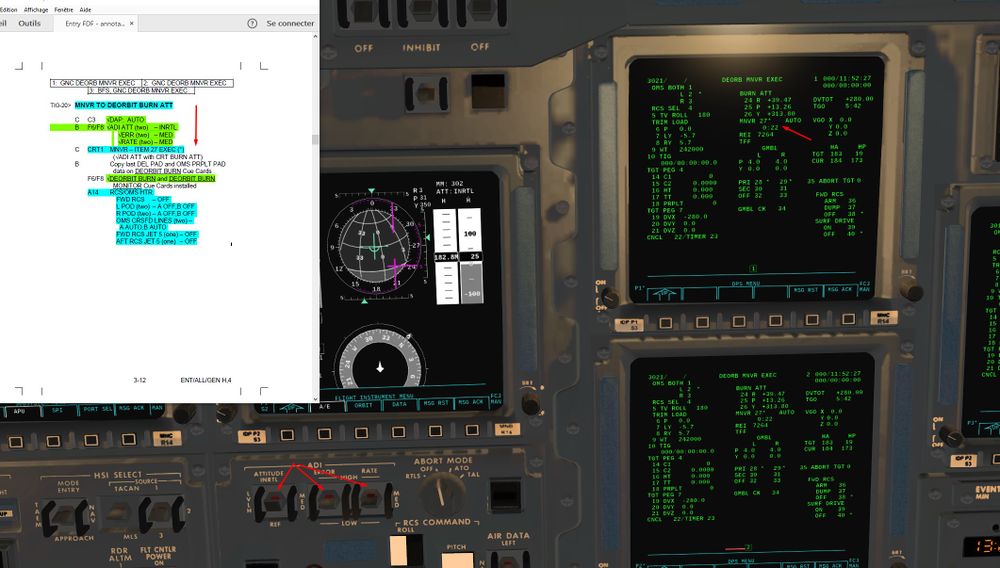 9) Reconfiguration of RCS/OMS heaters (all Off except crossfeed lines) 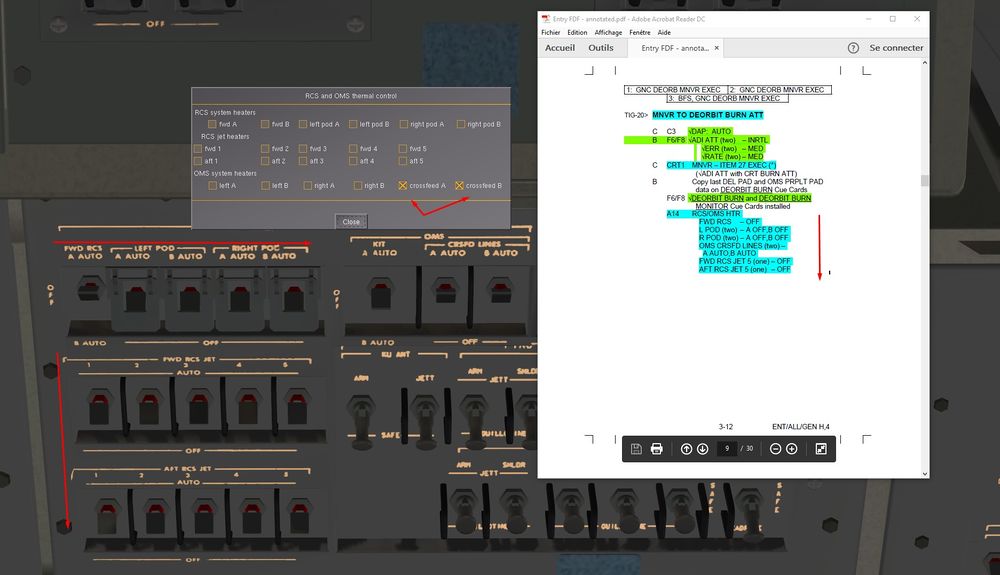 Aim is to have at least one APU working after the burn in case of malfunction of the two others.

Being without Hydraulic power for Entry is not an option, and would lead to a crash for sure. So better to be sure to have a working APU before to decrease the Perigee :) 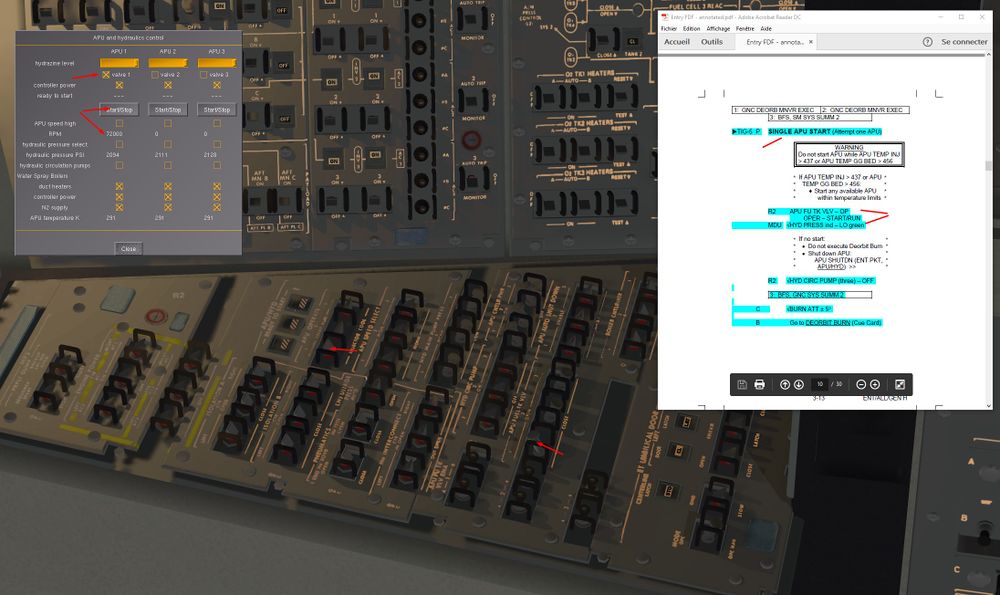 11) OMS valves reconfiguration before the burn, Helium is now feeding both propellant tanks in each OMS system 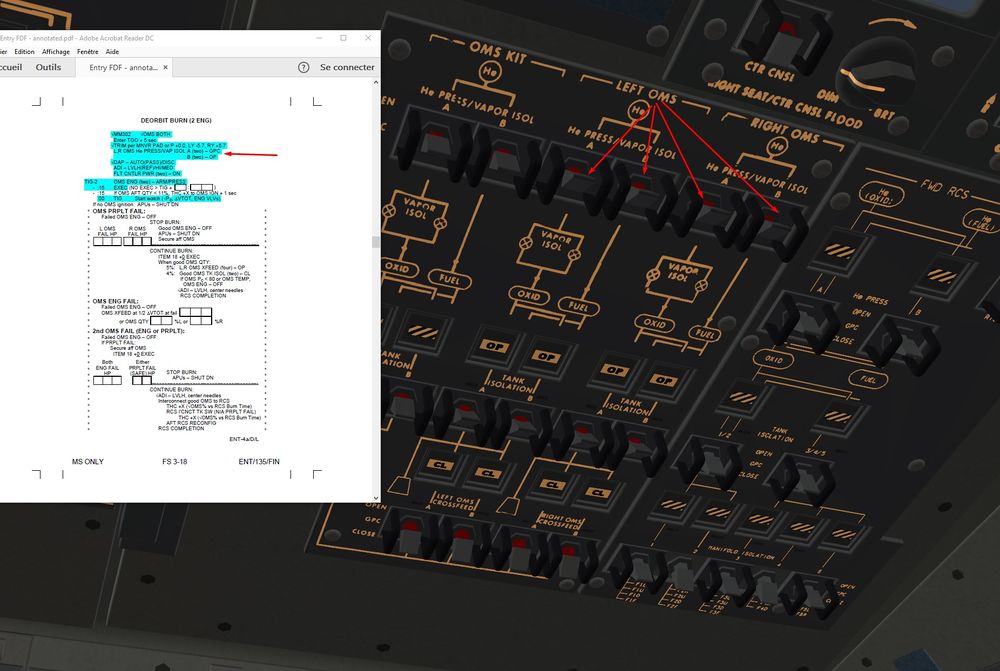 OMS Eng checked on ARM/PRESS, if not, no Nitrogen to open bi-valves that separate propellant from combustion chamber. 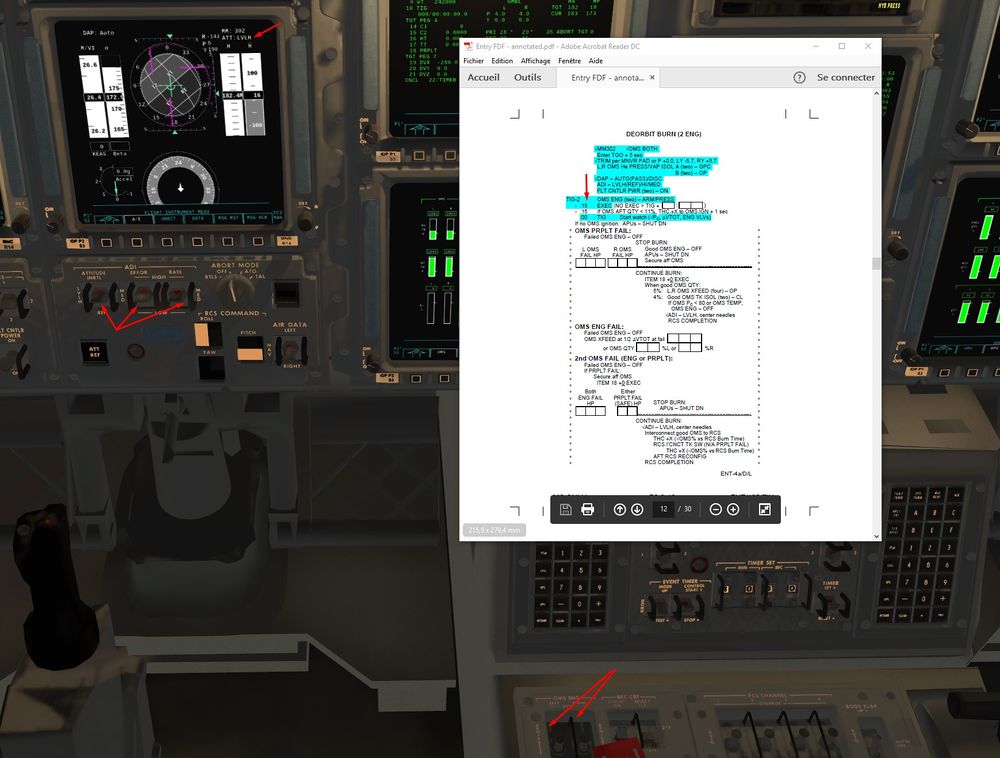 Next screen will show normal behavior on 2 engines (I corrected the small mistake )and we have 3 min of burn TGO. Good.

REI is around 4000 NM, so we press EXEC and monitor the burn.

Monitoring of: Valves well opened at 100% and Pc combustion full white and above 80%

Also, we can check the ENG IN P (engine inlet pressure) that indicates the pressure of either the fuel or oxidant before the combustion chamber

Value should be lower than the on in respective tanks due to propellant suction into the chamber.

That is an important parameter to detect an engine failure.

For example, if the ENG IN P of the oxidizer is high and the Pc parameter is below 80% , we can deduce that something is blocking the oxidizer after the engine inlet line.

Hence, that engine is lot, but we can still use the remaining fuel to do a cross feed and finish the burn on one engine.

Same stuff with ENG IN P Ox low that time, we can deduce that there is a leak somewhere between the oxidizer tank and the main chamber, so both the engine and remaining propellant is lost. 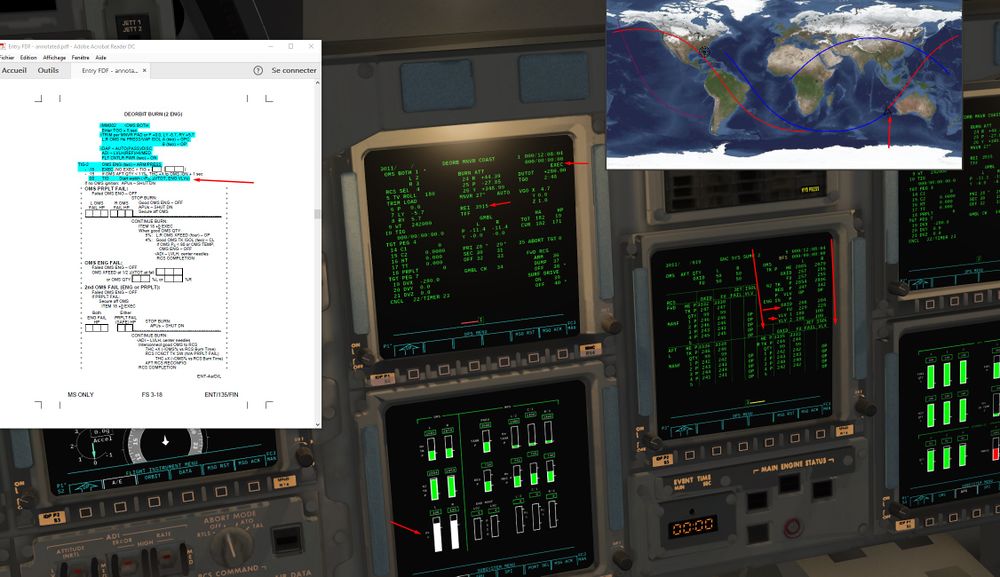 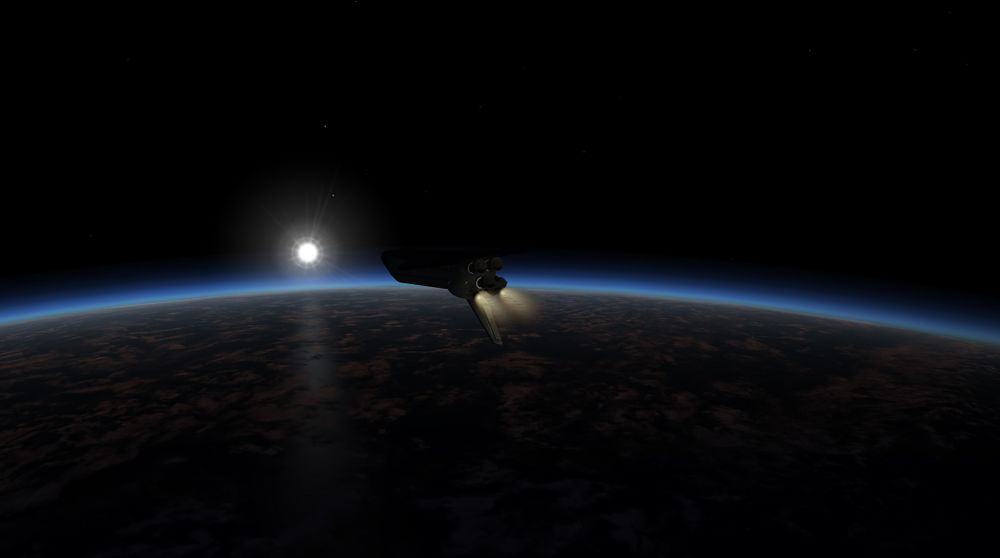 Burn is over , we check the results (REI, HA and HP)

REI of 3900 NM , and HP of 22 NM, perfect and in accordance with the map (circle indicates the estimated EI. It will move a bit before stabilizing) 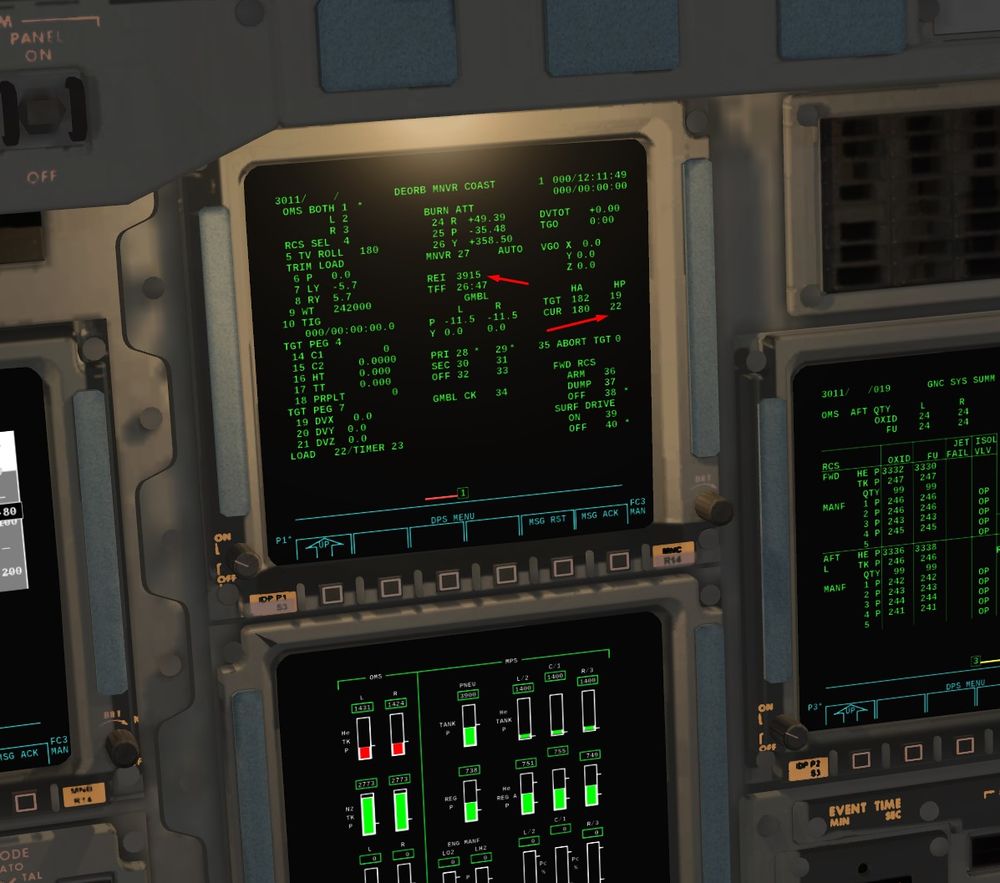 12) Final reconfiguration of OMS, Helium valves are closed once for good 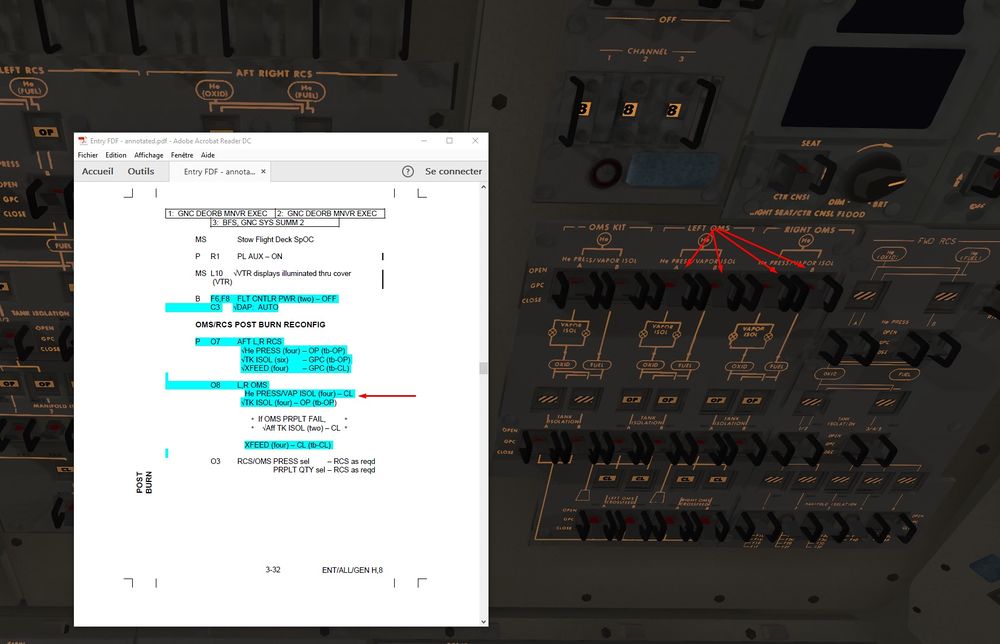 We go in the correct attitude for entry.

Autopilot will maintain an inertial attitude, and we want to be in 20 min in LVLH frame at: Pitch of 40°, no yaw or roll at Entry Interface. 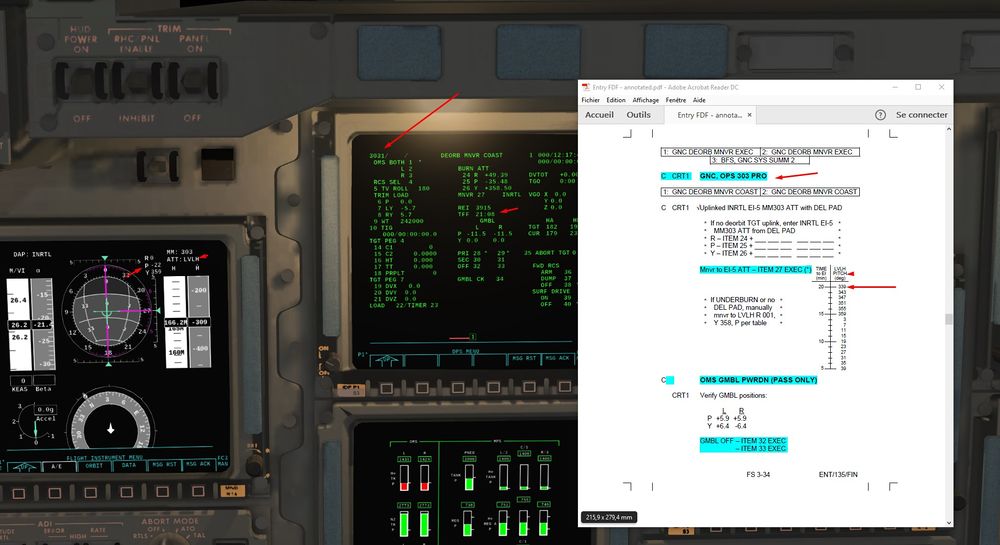 Event Time set to time before EI interface (TFF), 20 min in our case 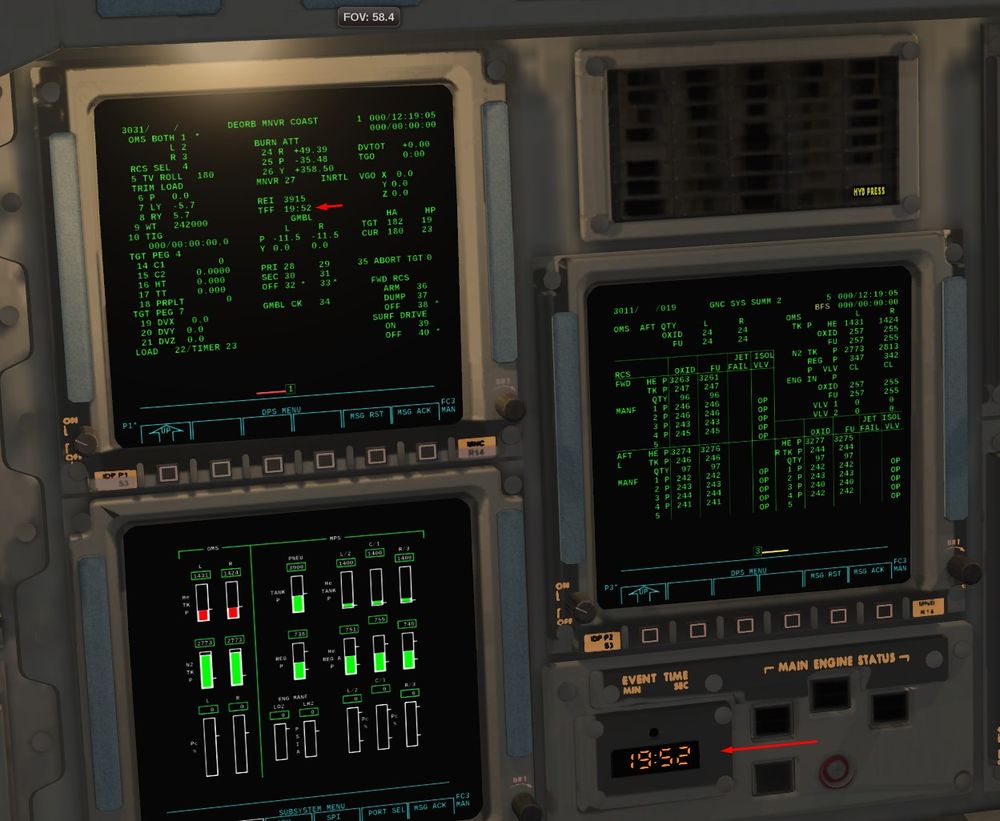 13) OMS gimbal are switch off, no more move OMS 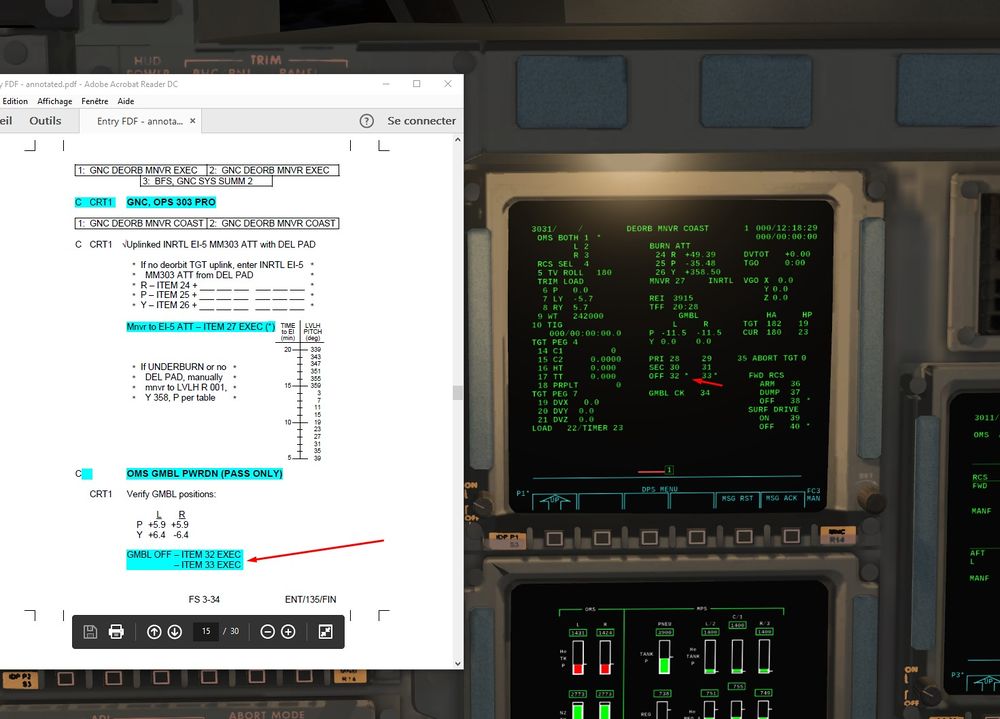 14) We gonna dump to remaining propellant in Forward RCS tank

We want to avoid potential hazard during entry.

Moreover, only the aft RCS are used during entry for shuttle control. 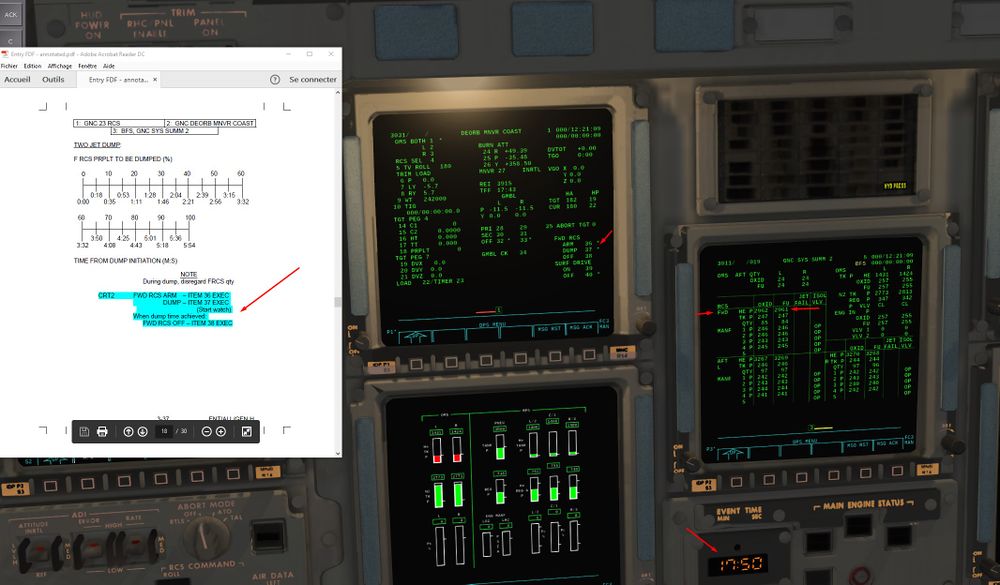 4 RCS at the front fire at the same time to avoid any roll, smart way to dump, no? 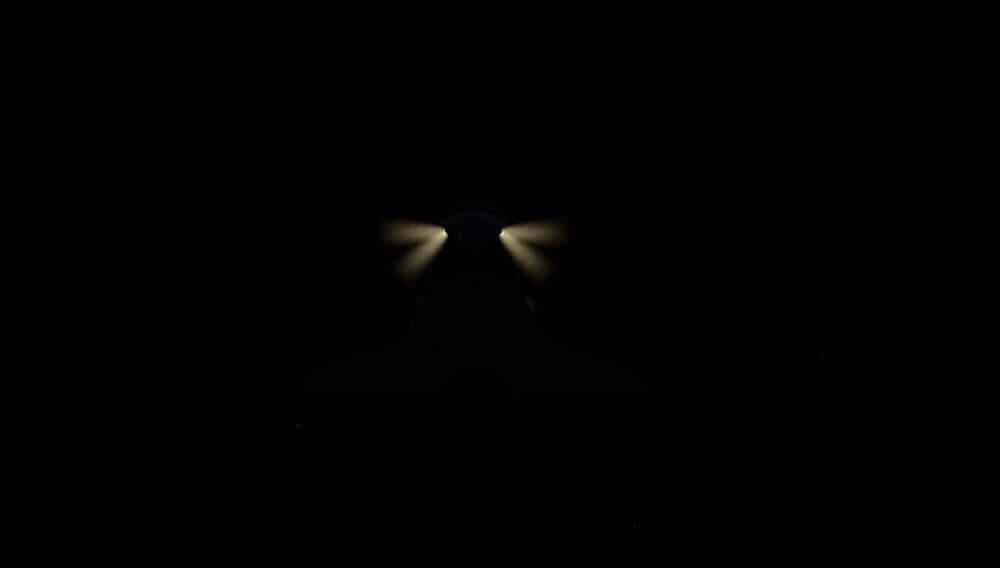 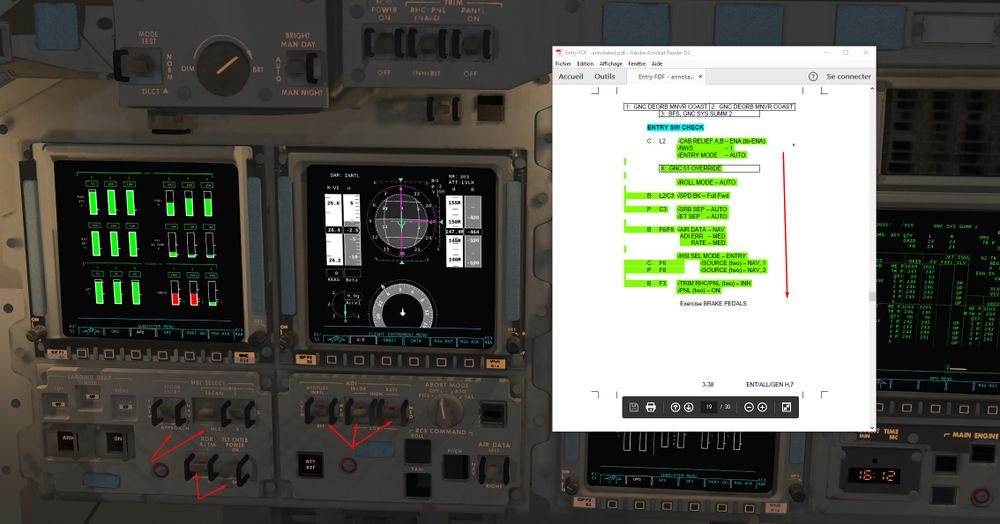 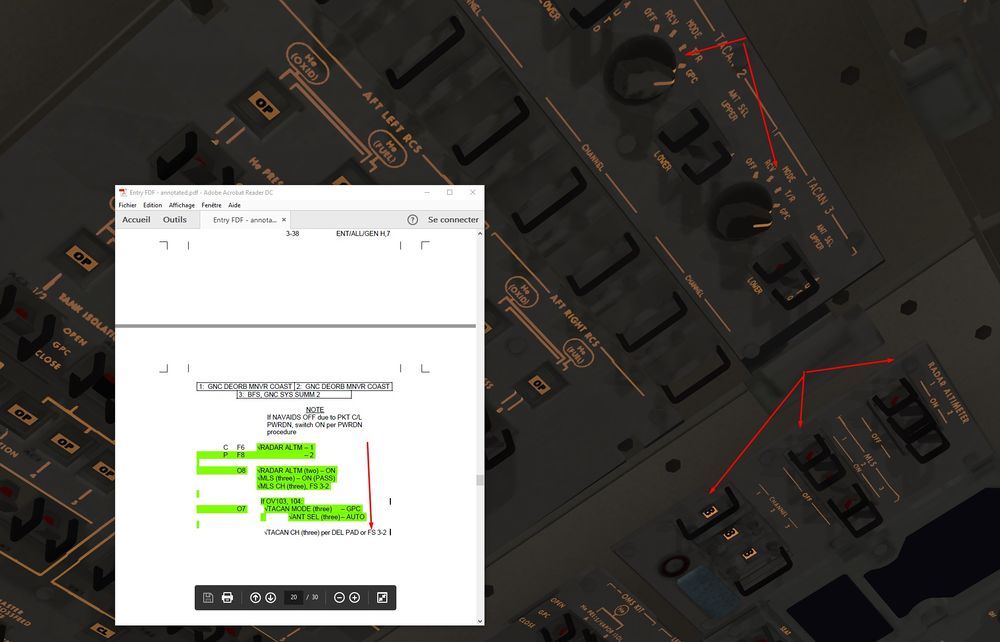 Fuel tank opened and Starter On 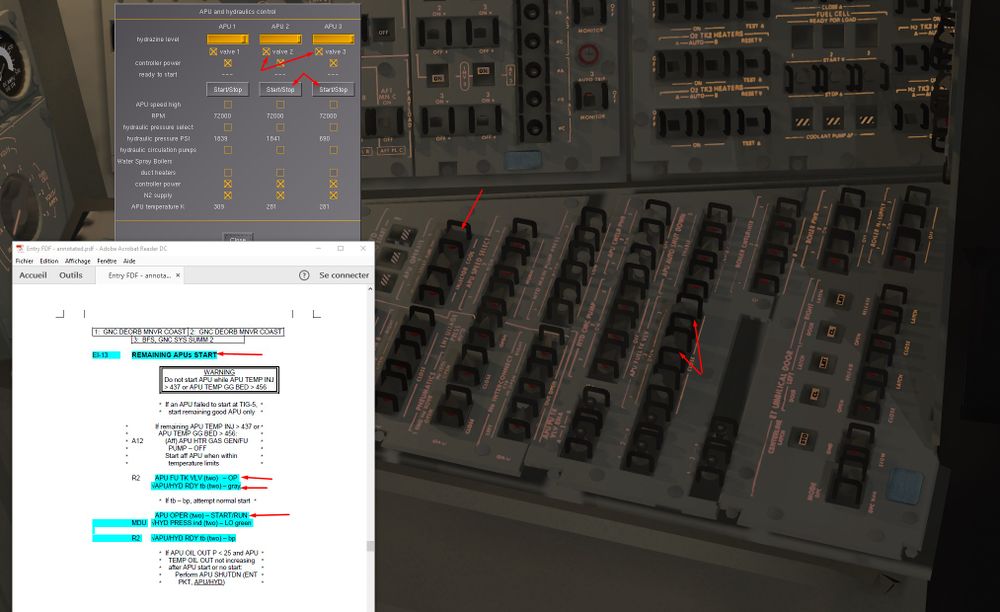 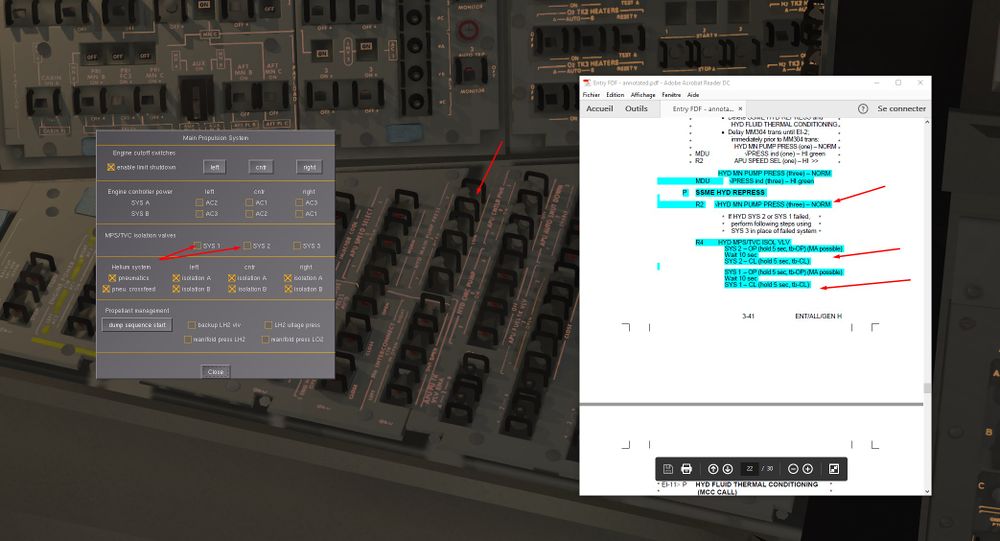 Checklist in game to verify that everything was done 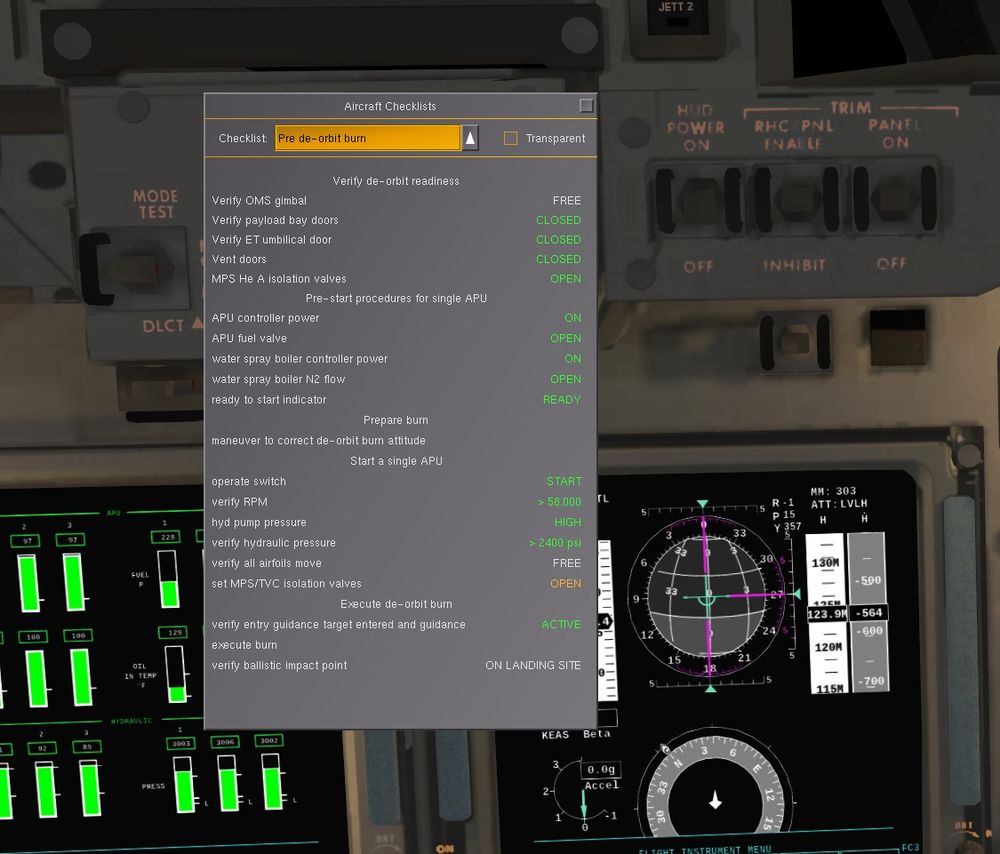 Voila, Rendez vous 5 min before the Entry Interface for the final Countdown