Difference between revisions of "FlightGear Git" 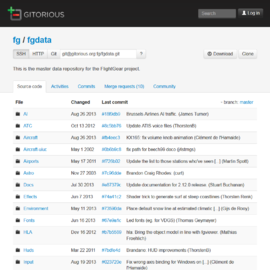 The fgdata repository on Gitorious.

Git is a version control system, used by the FlightGear project to store all of the files required to build FlightGear. This includes all the programs, the data (e.g. aircraft), supporting tools, etc. Git tracks updates to every file, as developers from around the world work together concurrently to create new versions.

While new FlightGear features and additions are in development, they are available from Git before they are available in the standard release version. Using Git allows users to use the newest possible version of FlightGear from the latest source files, to experiment with new aircraft or other features. However, it is not a beginner's tool. Using Git can expose the user to unstable features that show ugly error messages, or crash the computer.

The Git repositories are located at Gitorious and a mirror is hosted at the Mapserver.

In May 2010, after a hardware failure on the CVS servers, the FlightGear project changed its version control system from CVS to Git.

Much has been written on the advantages of Git over CVS. For the FlightGear project, some advantages are: