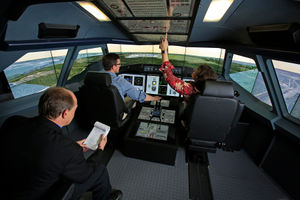 NIEC's A320 simulator with in house Image Generator

Replacing our in-house Image Generator with FlightGear's visuals. There are two major features which are motivating the switch to FlightGear.

FlightGear is a highly configurable flight simulator, where many subsystems can be customized or even disabled entirely. This includes the capability to disable the built-in flight dynamics engine (FDM) and use an external one (the so called null fdm), this makes it possible to also link one fgfs instance slaved to another master instance, where the slave instance would use the positional information from the master instance.

In addition, it is possible to feed in control inputs from external hardware/software (middleware).

Furthermore, FlightGear supports a number of multi-screen features, namely the capability to set up multiple computers in a master/slave fashion, where slaved instances use data from the master instance, as well as a sophisticated XML-configurable multiscreen mode for individual instances with multiple graphics cards and screens.

This makes it possible to use FlightGear in conjunction with 3rd party flight dynamics/simulators, where FlightGear would primarily serve as an image generator, with the flight dynamics and control inputs provided by external means.

It would be a good idea to start by going through related articles on the wiki, e.g. to name just a few [1]:

Document various interfacing mechanisms that are suitable for using FlightGear as an IG (Image Generator) with the built-in FDM disabled, and in conjunction with a 3rd party flight simulator/FDM (flight dynamics model).

That's basically the "lazy way", i.e. you don't need to modify tons of C++ code to get your setup going using NFS shares and the multiplayer system, so that all your stated requirements would be fulfilled directly - however, it's also the one least likely to benefit FlightGear as a whole, because you are really just using existing features in a creative way to make up for missing features that would be required for your use-case - that will particularly show when it comes to synchronizing/replicating runtime state that isn't easily replicate - such as e.g. having weather (winds, clouds, precipation etc) in sync between all master/slave instances.[2]

Using techniques from the Local Weather project we discovered we could add clouds as "models" which will render over the IG's consistently. Looking at using java/python/perl telnet interface to control weather.

Getting the Base Package

Installing on the host and nine image generators: Compiled for Fedora 21 as per the above instructions. tar'ed the fglatest directory and put it on an NFS shared directory named /data/fg_ig.

Each of the nine IG use autofs to mount the /data/fg_ig directory.

runfg.sh contains command to turn off screen saver and use the fgfs_cmdline_option file as command line options:

fgfs_cmdline_option contains options common to all the IGs:

Each Image Generator is a slave that uses its own .fgfsrc file which off-set the headings by 22.5 degrees as shown in this diagram.

Here is a sample of Cockpit Image Generator 01 (CPIG01), which is the screen on the far left, .fgfsrc file.

The front of the A320 model was removed with the Blender. We did this because the view would shift if we turned off the model. The accuracy of the A320neo model was perfect. The control panel, joystick, foot pedels, even the wind shield matched up with our shell. Because of the detail we assume the view height and forward position are also very accurate.

Using techniques from the Local Weather project we discovered we could add clouds as "models" which will render over the IG's consistently.

There are a lot of different way to skin this particular cat with FG :). At first glance, for drawing OTW I'd suggest using the IO option. I'd suggest reading through the following files in the Docs/ directory:

The last is particularly handy as it shows how to set up view fustrums for each of the OTW views you have. Finally, as well as getting help from this forum, you might also want to contact the -devel mailing list. There are some people there who have done work in this area who don't frequent this forum.[3]

With README.IO and README.protocol (in $FG_ROOT/Docs) documenting ways to interlink/synchronie multiple fgfs sessions (instances) that will usually reside on different computers. README.multiscreen is primarily aimed at the single-instance/multi-window/multi-screen use-case. However, these operating modes are not mutually-exclusive necessarily. The master/slave method is also explained at: Property Tree/Native Protocol Slaving

The other option being a custom coded network protocol with a focus on your specific requirements, this is commonly done for things like proprietary/3rd party software, refer to $FG_SRC/Network for examples, e.g.: https://sourceforge.net/p/flightgear/flightgear/ci/next/tree/src/Network/ [5]

A "hybrid" mechanism is the so called "generic protocol" which is basically a simple property-synchroniation protocol that is XML configurable (but not scriptable). This will not necessarily be useful in isolation, but it can be used to "augment" the other mechanisms - which will be particularly important when dealing with subsystems that are currently not aware of the distributed/multi-instance use-case (think multiplayer, fsweekend/linuxtag, image generator setups etc) The corresponding XML files (PropertyList XML) are to be found in $FG_ROOT/Protocol: Generic protocol [6]

There are several more or less complete attempts at bringing DIS, HLA and CIGI to FlightGear (in that order), some of these have not yet been communicated on the devel list, but you can find the corresponding patches/forks online.[7]

90% of the subsystems in FlightGear are not developed/maintained with the distributed/multi-instance use-case in mind, which shows when using features like AI traffic, weather engines or multi-pilot aircraft. [1]

The major issue you should be aware of here is that all the slaving/multi-screen stuff is basically pre-dating the ongoing multicore/HLA work by many years, so there isn't any kind of holistic scheme in place, but just a variety of different (and often incompatible) features and mechanisms that you would need to review, to determine the strengths and weaknesses of each approach - with your particular requirements in mind. The corresponding restrictions are most likely to show up in multi-instance setups showing the same cockpit (especially anything involving MFDs/glass cockpits), but also environmental state (weather), and anything involving AI objects (think AI traffic). Depending on your requirements, these may require a little more attention or not - i.e. even if only by disabling such features.[2]

Another thing worth taking into consideration that you may need a mechanism to exchange/patch certain simulator-side data with your external FDM and vice versa - unless the FDM and the scenery engine are using the same underlying terrain database - e.g. imagine differences in altitude above ground level (AGL); you may get away with a applying some kind of dynamical offset for lat/lon and altitude differences between the FDM and the IG (FlightGear), but according to past discussions on the matter (e.g. those wanting to hook up the Aerowinx 747 precision simulator/PSX), this is one of the less-obvious challenges - and it may make sense to establish some kind of middleware to negotiate between the underlying FDM/scenery data. To some extent, the osgEarth integration was facing similar issues - e.g. it had to patch up internal APIs for getting the current lat/lon/altitude, so that they're using the osgEarth instead of the default scenery engine. Ideally, FlightGear would provide some kind of dedicated IPC mechanism that could be used for these purposes - with different FDMs and/or flight simulators in mind, where FG would solely be responsible for acting as an IG. [3]

Regarding the latest wiki edits, for anything involving weather (and specifically the Advanced Weather system), you will probably want to get in touch with Thorsten to determine the limitations of the existing system and feasible workarounds to synchronie/replicate weater across multiple instances in a holistic fashion. [4] 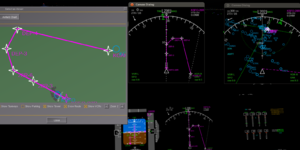 Screenshot demonstrating how the Canvas-based ND was designed to use an encapsulated "data souce" abstraction to hide implementation details, so that the same ND code can be used for creating independent ND instances that support AI/MP (or Dual Control) aircraft for driving the MFD[5]. Note that this was prototyped in late 2013 originally[6], and may not have received much testing/attention lately.