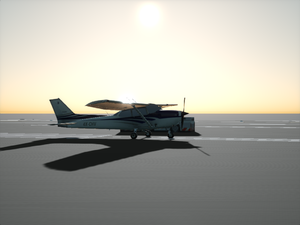 Unfortunately trying to load any scenery crashes FG instantly. Isuspect it's due to the core/compatibility profile issues I describedearlier.[3]

After getting convinced to pursue this by some of the core devs, for the past couple of days Fernando has been working on a new Compositor pipeline. It's still very much experimental (trying to load any scenery crashes FG!), but it's somewhat working under very special circumstances.

This is currently using the most popular PBR model for real time applications. This particular BRDF has also been recommended by the glTF spec, so it shouldn't be too bad. :) See https://github.com/KhronosGroup/glTF/blob/master/specification/2.0/README.md#appendix-b-brdf-implementation

Fernando's long term project from now on will be the "HDR" pipeline, which will be strictly OpenGL 4.2 compatible.[4]

Since everything on this pipeline relies on the core profile, I'm basically waiting for the move to happen so I can do the depth reversal trick.[5]

Again, this is all *very* experimental for now. A lot of things are broken because I'm forcing the use of core profile shaders (thanks Nvidia for letting me do this under a compatibility profile context!), so this is nowhere near usable. Still, I'm planning to release this to next in the next week or so because it doesn't break anything: everything is in FGData and on a different compositor pipeline, so Classic and the C++ core are completely unaffected. In general the move to the core profile will probably fix a lot of the issues that this pipeline currently has.[6]

For now, the main goal is definitely increasing motivation to get on with moving to Core profile.[7]

No compute shaders required, so Mac should work fine as long as we are using at least GL 3.3. :) [8]

Most 3D artists nowadays are fairly familiar with PBR content creation tools. I think using PBR and trying to abstract the 3D artist from the "under the hood" stuff like Effects, XML definitions, etc. will always be a good step towards lowering the entry barrier for content creation in FG. Of course these developers will have to learn how animations, systems, FDMs, Nasal, etc. work, but streamlining the 3D part to a simple "Export to glTF" button will be key in my opinion.[9]

glTF will only prove beneficial for PBR-based models. Otherwise I think we should be fine with the current model-combined approach since aircraft devs are already familiar with this workflow. The HDR pipeline will only work on 2021.x because it requires the core profile, so I think it makes sense to only offer support for glTF on 2021.x to avoid compatibility messes.[10]

Fernando recommends that aircraft devs don't try to support this because it's still very experimental, so they might be working on something that is subject to change. Of course if they just want to play around feel free to ask for help.[11]

For now I plan to only support WS30. I'm not sure how the materials are going to work for the terrain, but I guess it's too early for now (both for WS30 and the HDR pipeline!).

The real time environment reflection pass renders the skydome and the terrain, so I'd be really useful to have some way of setting the WS30 LOD level from the Compositor/Effects. That way we can use a really rough terrain that renders very fast. The difference in quality shouldn't be too noticeable as we are rendering to a small 128x128 cubemap.[12]

A few implementation details for the curious:

For now, the initial plan is to only support PBR through glTF models, and glTF does support using numerical values for the whole material instead of a texture.[14]

Here are some screenshots of the c172p on the Nimitz. Aircraft carriers are a nice substitute to actual terrain :)

Unfortunately trying to load any scenery crashes FG instantly. I suspect it's due to the core/compatibility profile issues I described earlier.[15]

Mac only supports up to OpenGL 4.1, which doesn't have compute shaders. Compute functionality is only accessible through Metal (or MoltenVK as you mentioned).

The advantages to compute shaders are many, but again we can't use them easily. In an ideal world Mac offers proper support for OpenGL and we don't have to even switch to VulkanSceneGraph, but that's not the case unfortunately. [16]