Enjoy reading the latest edition!
Please help us write the coming edition!
May 2022 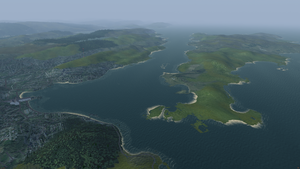 One of the major issues with the WS30 rendering is reducing the blockiness of the landclass texture.  This is particularly apparent around the coastlines, where there is a very clear separation from water and land.  For some time Stuart has been trying to find a way to overlay openstreetmap coastline vector data, but without much success.  Scott recently provided the idea of writing the vector data to a higher resolution texture, and then mixing that with the landclass texture. Some changes where pushed with a simple implementation of his idea.  In this case the overlay texture is 2048x2048 for each WS30 LoD tile.  So approximately 1m resolution.  The texture is built at runtime from the existing WS30 data extracted from openstreetmap.  The texture uses a couple of channels to indicate a possible beach shelving into water, and a shader mixes this and applies some noise to vary how much of a beach is actually shown

Apart from improving the general quality, there are some interesting further areas of development if anyone is interested:

AeromatiC++ has been updated to version 3.3.20 in the JSBSim repository. The most important changes are in the propeller code which now generates tables which get quite close to published numbers. Propeller configurations generated by AeromatiC++ are now finally usable with convidence. Another notable update is that configuration files which are entered in metric units will now use metric units in the configuration files too. A smaller change is the option to put the aerodynamics section into a separate file by specifying --split as a command line option, and adding --fgfs as a command line option generates a rudimentary FlightGear -set file.

Development of the Fokker 50 model has started again. Almost 90% of the 3d mesh has been reworked, the cockpit has been updated, the lighting panel is now functional and the Fokker 60 and Fokker F27 mk100 Friendship have been added to the package. The FDM has also undergone some changes, all liveries are now high resolution and the livery system was updated to have separate liveries for the Fokker F27, Fokker 50 and Fokker 60 and an added dirtmap which can be controlled using the configuration dialog and which is set at a random level at startup.

Thanks for reading FlightGear Newsletter May 2022!