The Boeing 707 is a four-engine commercial passenger jet airliner developed by Boeing in the early 1950s. Its name is most commonly pronounced as "Seven Oh Seven". Boeing delivered a total of 1,010 Boeing 707s, and also offered a smaller, faster model of the aircraft that was marketed as the Boeing 720.

The 707-320C is a modern development of the 707-320. It has a convertible passenger–freight configuration, which became the most widely produced variant of the 707. The 707-320C added a strengthened floor and a new cargo door to the −320B model. The wing was fitted with three section leading edge flaps which allowed the deletion of the underfin. Three hundred thirty-five of these variants were built, including a small number with JT3D-7 engines (19000 lb takeoff thrust) and a takeoff gross weight of 335,000 lb (152,000 kg).

Ironically, most −320Cs were delivered as passenger aircraft, airlines hoping that the cargo door would increase second hand values. The addition of two additional emergency exits, one on either side aft of the wing raised the maximum passenger capacity to a theoretical 219. Only a few aircraft were delivered as pure freighters.

One of the final orders was by the Iranian Government for fourteen 707-3J9C aircraft capable of VIP transportation, communication, and in-flight refuelling tasks.[1] Due to several reasons, these planes were re-converted to civil usage as passenger planes. 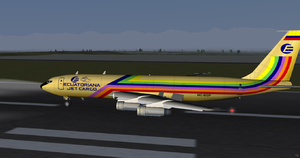 The plane comes in two versions, the Cargo version (707-320C) and the passengers version. This one is based on the 707-3J9C, which is one of the last 707s still used as passenger plane. Being very similar to other versions of the 707, can be used with the Liveries of those versions, which are included with the model. 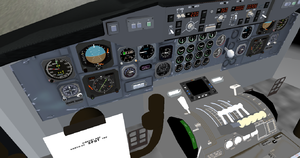 The model is based on the work of Innis Cunningham and Isaias V. Prestes. Andino Gonthäler added some features to the model, such as the landing gear (with rolling wheels and moving nosegear), new reversers, several lights (landing lights, logo light, nav lights, cabin lights, strobes, beacon, with interruptors on the overhead panel), and a detailed flightdeck. Most instruments come from other FG planes, such as 747, 737, IL-96, etc.

FDM and other features 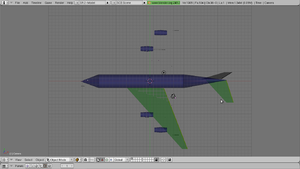 The previous models of the 707 in Flightgear used JSBSim. This one uses YASim.

This model uses a working autopilot based on the 777, pushback, tiller steering, livery selection for both Passenger and Cargo versions. 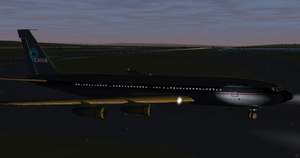 The model is downloaded with a series of Liveries, most of them made by Brett Harrison, some done by Isaias Prestes, and one made by Andino Gonthäler. Some of them were slightly edited, so they can fit the modified model.

Landing lights have a lightmap, which can be seen with any livery, if shaders are enabled (at rendering options).

There is much work to do, including: