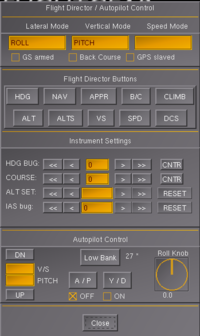 PUI is the standard GUI engine used in FlightGear, it is part of PLIB and is using raw, fixed-pipeline, OpenGL code internally (no OpenSceneGraph). As of mid 2021, FlightGear is in the process of working towards adopting the OpenGL Core Profile, this means that PUI is causing trouble and needs to be replaced/disabled or ported.

PUI provides a fairly basic, but robust, set of widgets. PUI is also used for rendering the Menubar.

FlightGear uses a GUI widget set that is implemented on top of OpenGL. This has many advantages from a portability standpoint and from the standpoint of integrating with window systems. PUI doesn't have every feature under the sun, but it was never meant to. It's relatively small, lean, mean, and written on top of OpenGL which makes life *much* easier for us.

PUI already is a separate distinct library within Plib. It depends on some central utility stuff, but that's about it. So it is pretty stripped down and separate already.[3]

We are to some extent hamstrung by the rather old GUI toolkit we use. However, replacing that is going to be non-trivial, and it would affect not just the core GUI but also all the dialog boxes that have been set up for particular aircraft.[4]

In early 2021, James did a brief evaluation of ImGUI as a possibility - he's also evaluating it in some projects at his day job.

The API is interesting if you’re starting from scratch and only exclusively in C++, but it’s not a great fit for how we define GUIs in FG (via XML/Nasal): there is no back door that he could find, to access the persistent state of the GUI, or build it up in a data-driven way. So making a mapping to keep our existing GUI XML working (and updating correctly) becomes a bit of a chore.[6]

Pretty much all of the FlightGear GUI is defined in XML space, except for a few oddments. Let’s say 95% at this point.

Additionally, even if we were to change that for the core sim (and James' current plan is to keep the XML syntax and just extend it), the installed base of aircraft ship their own XML dialogs (eg., replacing the autopilot dialog with a custom one, or just adding their own aircraft-specific helper controls for doors / lights / cargo / whatever). So even if we found the most sublimely beautiful, intuitive, compact GUI description language in the world, we have to keep the XML syntax working as-is, for the foreseeable future.

Given this, James' intention is to replace the output side PUI but keep the front-end side (XML / properties / bindings) unchanged, and therefore backwards compatible, and simply add some new types / options / widget types going forward. This will mean we still have to deal with the slightly cumbersome XML+Nasal syntax, but, well, it’s not *that* cumbersome. [7]

In mid 2021, James reported that he is working on some ‘PUICompat’ classes which hold/own/represent the GUI state in C++, but which can be used with Nasal CppBind. And of course we could indeed expose those later on. [8]

In July 2021, James suggested not to worry about the existing GUI code, it’s going in the bin.[9]

For the time being, the in-sim GUi can’t do Unicode yet, but James is working on it, hopefully available soon.[10] Also, the in-sim menubar will change with the new GUI, *and* we use a native menubar on macOS. Until James replaces the PUI fonts we can’t use Unicode symbols. So, will have to come back to it once the new GUI is merged.[11]

In 08/2020, James stated that he was still working (exceptionally slowly!) on replacing PUI (as part of removing legacy OpenGL code (PUI, HUD, 2d panels, porting Canvas away form ShivaVG), so we can switch to Vulkan/VSG at some point (ideally at some point before Apple turn off OpenGL support…)), and that he doesn't think /any/ of us *want* to be working on these features particularly, but projects like these need to be done before anyone can have fun with VSG or Vulkan (personally James would be very enthusiastic about working on VSG support (being on macOS, I also have the most to lose / gain from it)). Sometimes that’s just how it goes. Equally they will all benefit the project ultimately, but the payoff both for the individual and the project is very drawn out. [14]

In 10/2020, the estimation is that PUI should be going away really ‘soon’, the replacement code is already in next / 2020.2. (There’s no plan to actually /use/ the new UI code in 2020.2, but if the bugs in it prove simple, we could actually turn it for specific dialog: it seems very unlikely this makes sense for a stable release however)[15]

The fixed-function removal, is actively in hand (Gaetan is working on the 2D panel part, and James is going to focus on PUI in the rest of 2020). James hopes that means next year he can focus on Vulkan, or at least, using OSG as if /were/ VSG, so the migration in a year or two when VSG is stable, is not so painful.[16]

The PUI UI and replacement can co-exist in the same build (they already do, effectively.[17]

In 11/2020, James suggested not to worry about details such as PUI styling/theming etc: we’re not making such changes for the LTS, and PUI should be gone before the next release.[18] Also, he recommended (to everyone) to stop touching GUI stuff for a few weeks, as he's about to turn it all on its head.[19]

The new GUI has been incubating for a few years, but there's apparently been a lot of progress as of 10/2019.

It is likely the new GUI will be a user opt-in feature - at least initially. The sunset of the PLIB library _could_ happen relatively soon, but people will need to see the new GUI and react to it before we could commit to PLIB removal [20].

See also QtQuick use in FlightGear.

According to James, we have to accept that changes like testing or making PUI a modular thing or moving the JS code tend to have an immediate pain for some people (because strange stuff gets broken, and takes some time to get fixed), whereas the payoff in terms of improved joystick handling or replacing the UI or testing of all subsystems will take some months or years to be felt.[22]

James said he was in the middle of porting the launcher’s final tab (location) to the new UI scheme, once that’s done he will start sketching out the ‘in sim’ settings UI using the same pieces. He’ll send a request for contributions around about that in the next three-four weeks, once he has enough templates & examples that there is a clear pattern to follow.[23]

James announced that the launcher is now feature complete with the QtQuick UI, he’ll keep making bug-fixes of course as people report them, but my todo list for the core features is now done[24].

In 10/2017, James said he was getting really close to having the PUI replacement UI suitable for beta-testing.[25]

Originally, James was hoping to land the PUI replacement GUI in the last dev cycle in 2017 (at least as a proof-of-concept, probably not as the default UI), so wouldn’t expend lots of effort on things like collapsible sections which might be a lot of work with the current PUI/Canvas approaches, but are trivial with the new QtQuick based UI scheme.[26]

Once the basic new UI is in place we can experiment with different re-arrangements easily, without being limited by PUI. (James expects PUI to live on as the default / alternate UI while this happens)[27]

Technically, this entails replacing dialog.cxx with some code which builds up some special ‘PUI-Emulation’ QtQuick controls, so that existing dialogs (especially from Aircraft) continue to work. This mode will look somewhat ugly but hopefully no more ugly than PUI! And it helps that the set of widgets we have in PUI is limited, and the ‘tricky’ widgets (map, scrolling list, etc) are in the dialogs will will replace with new ones first.[28]

This PUI emulation isn't going to use any code from PLIB[29], so what will remain from it in FG afterwards will be the FNT and JS components (reworked).[30]

We need to explore if Qt Quick or widgets is the better way to go, with a preference towards Qt Quick, since it will allow things closer to current PUI (semi-transparent widgets on top of the 3D content). It still allows creating separate windows too (Erik’s use case), but means we get consistent, custom theming on all platforms, since standard desktop look is not so nice for a flight-sim.

James intention is to make a QML-hosting OSG-drawable, and add this as a concept in Qt-enabled builds, then port some PUI dialogs to it, and see how easy / painful the process is. Hell create some QObjects which expose commands and the property tree and Nasal.

This has the advantage of not touching the OSG window at all, QtQuick simply provides some additional OpenGL rendering on top, which we pass events to - pretty much exactly the same as what we already do for PUI, and hopefully can co-exist with it. James got this working in a local OSG tree in a standalone demo, but that’s based on osgQt - he wants to see if he can make it work on a normal, non-Qt OSG window inside FlightGear.[31]

The idea is to host an XML dialog (Currently done with PUI) from Qt also. The question is if that can be done keeping ‘source compatibility’ exactly with the current UI XML and Nasal interface. It probably can be, but many of the PUI widgets have really ugly APIs, especially for combo-boxes, drop-down menus and scrolling lists, where it makes sense to map a Nasal class to a Qt ItemModel, which would be more elegant and easy to work with in both Nasal and integrate on the Qt side. But obviously would mean changing the dialog sources.

Of course, aircraft dialogs tend to be simpler, and not use the more complex PUI widgets, precisely for reasons like this, but that’s a limitation it would be best to remove.[32]

However, improving the frame-rate and modernised 3D rendering, can’t be worked on until the PUI code, 2D panels and Shiva are removed, but doing so is a frustrating slow path[35]

Besides, while most people seem to agree PUI needs to be replaced, it sounds as if the fallout from doing so would be more painful (cumulatively) than the pain its existence causes.[36]

But given that with many graphics drivers PUI doesn't render correctly when higher shader quality is on, graphics folks are also convinced it needs to be replaced.[37]

In addition, OpenSceneGraph (OSG) can obviously not help optimize any PUI related GL code and PUI widgets are generally considered to be pretty archaic and not easy to extend[38][39][40].