The Nasal console is a complete Nasal scripting shell, where you can type and execute Nasal code. Keep in mind though, that it is really only intended for quick hacks, there's currently no way to save or load Nasal modules in $FG_ROOT directly via the console. You can however dump your code to the startup terminal window and paste it to a text file this way.

The startup/terminal window is also the place where you'll see all the console output created by your scripts (print() statements, logging, warnings/errors etc).

The Nasal console could for example be used to test aircraft functions without having to assign key bindings.

The Nasal console dialog supports several tabs, of which each can hold separate Nasal code snippets, all of which are saved on exit and reloaded next time. This is useful for little tests, or for executing code for which writing a key binding is just too much work, such as "props.dump(props.globals)". It's easy to add more "tabs" (= radio buttons). If you want to add more tabs to hold more code samples, just add more <code> nodes to autosave.xml

The Nasal console dialog supports resizing, Resizing is at the moment done like dragging, but with Ctrl-key pressed (at the beginning). Dialogs expand to North-East, which is a bit unusual and might be changed later. The dialog margins are also sensitive for resizing without pressing the Ctrl-key. 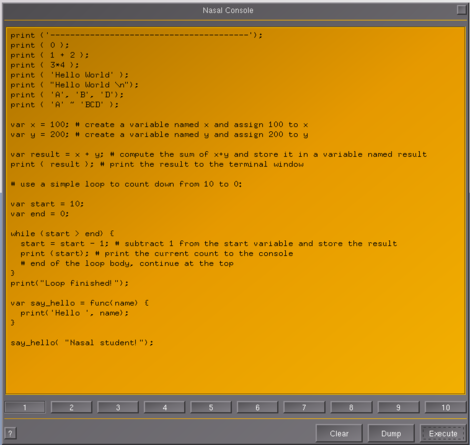 In FlightGear 3.0, the built-in Nasal Console was updated to also add native copy/paste support, a feature that got implemented as part of the ongoing Canvas effort (see Howto:Clipboard access using Nasal for details). This feature makes it now possible to easily copy/paste snippets of code FlightGear, without having to use the "dump" feature.

We talked about improving the existing Nasal documentation [1] [2], and it seems that users would prefer examples to be self-contained, so that they can follow tutorials by using the Nasal console and running code there, so that FlightGear could be used as an IDE - this would require a bunch of enhancements, such as:

As of 07/2012 there's a new GUI system in the works using the Canvas 2D rendering backend, this will make it possible to implement all of the discussed changes directly in Nasal space, see Canvas Widgets for further information.