How the Nasal GC works

The main Nasal repository (maintained by Andy Ross) can also be found at github: https://github.com/andyross/nasal

The latest version in FlightGear is maintained in the SimGear repository.

The garbage collector in Nasal is pretty self-contained and entirely implemented in the file gc.c.

The Nasal language is a dynamic programming language, where memory is not manually allocated and freed by the programmer, but instead the Nasal virtual machine automatically allocates memory from so called "memory pools", every so often these memory pools must be checked, to see how many references (i.e. objects like variables) are still reachable, so that the unreachable ones can be removed from the memory pool and/or so that memory blocks in each pool can be allocated or freed. This is called "garbage management" or "garbage collection".

The current Nasal garbage collector (GC) is known to affect the frame rate in FlightGear and occasionally causes stutter (increased frame spacing) under certain circumstances (i.e. under heavy load, due to complex scripts - such as the Bombable addon or the local weather system.

This is largely attributed to the GC being a fairly simple sequential mark/sweep collector, which needs to stop all operations, recursively mark all reachable objects and free unreachable objects in an exclusive, single-threaded, fashion.

In other words, the time spent in the GC is proportial to the number of active objects and references held (i.e. lines of code), even for objects which may not be running or active - just loaded. For additional background information, please see Improving Nasal.

Provide a basic introduction to garbage collection and document how the existing Nasal GC scheme works, so that it can be fully understood, before alternatives (fixes/improvements) or additional implementations are added (feedback and contributions are encouraged and appreciated!).

Also, come up with an approach to generalize the Nasal GC API such that additional GC schemes can be easily implemented next to the native Nasal GC, providing an option to select a custom/experimental GC implementation at startup. Ideally, this should be possible by using a switch property during fgfs startup - such as --prop:/sim/nasal-gc=custom

One of the most straightforward changes would be turning the existing mark/sweep GC into a generational GC using 2-3 generations, where past GC survivors are promoted to the next generation, the GC manager naGC_get() would then by default only request new memory in generation 0, whereas resize() events in gen0 would result in the next higher generation being subject to GC (and so on). The most senior data structures and objects would over time end up in the "eden" generation.

Some of the first steps would include:

In addition, the following online presentations provide a basic introduction to garbage collection:

When using a mark-and-sweep collector, unreachable objects are not immediately reclaimed. Instead, garbage is allowed to accumulate until all available memory has been exhausted. When that happens, the execution of the program is suspended temporarily while the mark-and-sweep algorithm collects all the garbage. Once all unreferenced objects have been reclaimed, the normal execution of the program can resume.

Obviously, the main disadvantage of the mark-and-sweep approach is the fact that that normal program execution is suspended while the garbage collection algorithm runs. In particular, this can be a problem in a program that must satisfy real-time execution constraints (like a flight simulator). For example, an interactive application that uses mark-and-sweep garbage collection becomes unresponsive periodically.

The mark-and-sweep algorithm is called a tracing garbage collector because is traces out the entire collection of objects that are directly or indirectly accessible by the program. The objects that a program can access directly are those objects which are referenced by local variables on the processor stack as well as by any static variables that refer to objects. In the context of garbage collection, these variables are called the roots . An object is indirectly accessible if it is referenced by a field in some other (directly or indirectly) accessible object. An accessible object is said to be live . Conversely, an object which is not live is garbage.

The mark/sweep algorithm can also be easily expressed using pseudo code, i.e. in Nasal itself:

The mark() function would just recursively check (i.e. calling itself) if the "marked" flag is set or not, and make sure to set the mark bit for all referenced objects:

Finally, the sweep() function (reap() in the Nasal GC), will free all unreachable objects and reclaim the memory:

Nasal's implementation of sweep() ( called reap() ) works such that it is always executed for a handful of different type-specific memory pools. In addition, it also makes sure to allocate new memory if required.

A memory pool is basically a preallocated region of memory, which is dynamically resized. The Nasal GC works such that it manages a handful of global memory pools for all native Nasal types (strings, functions, vectors, hashes etc). At the moment, the hard coded defaults ensure that 25-50% of additional object "slots" (memory blocks) are kept available during each execution of reap() [1].

Whenever new memory is requested to create a new type (such as a vector or a string), the available memory in the corresponding pool will be checked, reachable objects will be marked, and dead objects will be removed from all pools using a mark/sweep collector, new memory blocks will be allocated if necessary. All of this happens atomically, i.e. single-threaded, in a "stop-the-world" fashion.

A memory block is a singly linked list: flightgear/simgear/next/simgear/nasal/gc.c#l10.

New memory blocks are allocated using newBlock() and the memory is initialized with 0: flightgear/simgear/next/simgear/nasal/gc.c#l167

For each of the 7 Nasal data types, there is a separate storage pool available, declared as part of the "Globals" structure.

As can be seen, each storage pool is addressed by its enum index (0..6): flightgear/simgear/next/simgear/nasal/data.h#l65

For example, globals->pools[T_VEC] refers to the storage pools for vectors:

The 7 storage pools are declared in code.h as part of the "Globals" structure: flightgear/simgear/next/simgear/nasal/code.h#l40

The relevant part is:

So, we have these pools: 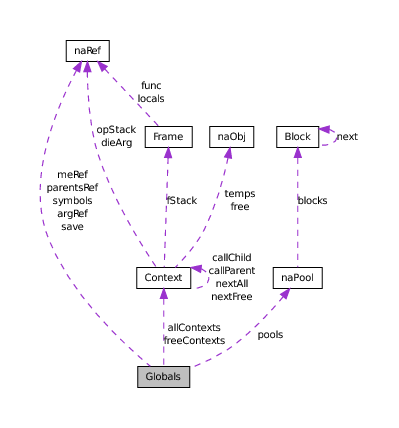 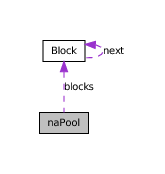 The structure keeping all pool-related information is named "naPool", the layout of the naPool structure can be seen in data.h: flightgear/simgear/next/simgear/nasal/data.h#l181

As can be seen, "elemsz" just stores the size of each type-specific structure, so that it can be used for new allocations.

The size of a memory pool is determined using poolsize(): flightgear/simgear/next/simgear/nasal/gc.c#l203

The function poolsize() just iterates over all memory blocks in the pool, and computes the total size of the pool by adding up the "size" field of all blocks in the linked list.

All of these wrappers are really just helpers on top of naNew(), they just set up type-specific information and initialize each Nasal type properly. For instance, first naNew() is called for the given context, along with the type info (to set up the size properly)- and then each type is initialized:

As can be seen, the key allocator function is naNew(). All memory allocations done via the naNew*() helpers will first of all set up memory using naNew().

naNew() is really just a fancy malloc() replacement, i.e. it's just getting passed the Nasal execution context, and the nasal type (which is mapped to the size of the requested memory region using naTypeSize()).

First, the conditional checks if there's any free memory in the Nasal storage pools for the requested Nasal data type, if there isn't any free memory left, new memory is assigned to the contexts->free[type] pool via naGC_get().

Note: naGC_get() is the only function which really manages all memory pools and which triggers the GC. Allocations via naNew()* will end up calling naNew() and naNew() ends up calling naGC_get() always.

The final argument to the naGC_get() function is a pointer to to the context's nfree[type] member which is updated by the function.

Next, a new naRef structure is set up using the allocated naObj memory and the type info: 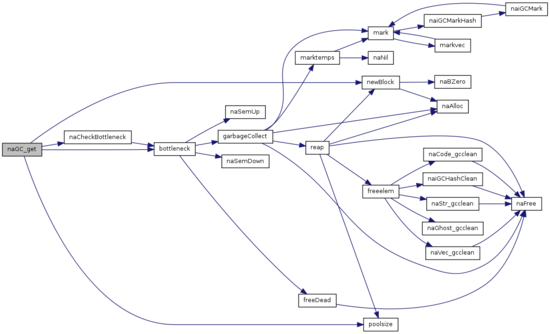 naNew() doesn't directly allocate new memory from the heap using naAlloc(), but instead uses the naGC_get() helper which manages memory from the global pools (i.e. preallocated memory for each type).

For each native Nasal data type (scalars, vectors, hashes, funcs etc) , there are separate memory pools in globals->pools[n]. The index (n) is one of T_VEC, T_HASH, T_FUNC etc.

As can be seen, the garbage collector itself is triggered by setting the global "needGC" flag to 1 in the globals structure and then calling the bottleneck() function: flightgear/simgear/next/simgear/nasal/gc.c#l105.

The memory region from the global pool is cast back to a pointer (struct naObj**): flightgear/simgear/next/simgear/nasal/gc.c#l226 the "nout" parameter is just there to update c->nfree[type] with the amount of free memory.

In other words, whenever new Nasal types are allocated, new memory from one of the 7 Nasal pools is requested. All of these allocation requests are channeled through naNew() and finally naGC_get(). naGC_get() is the de facto memory manager in Nasal, all memory management is triggered here - new memory block allocations for each pool, as well as garbage collection via the bottleneck() call.

This also means that we basically just need to provide an alternate naGC_get() function, next to the existing one, to add support for alternate GC schemes.

It would probably make sense to change the pool manager interface/signature such that additional implementations can be easily provided and registered, so that merely a GC_CALLBACK pointer must be set during initialization in order to use a different GC scheme:

The overhead caused by managing the memory pools and constantly scanning the heap (mark/reap) can be examined by modifying the naGC_get() function such that it no longer uses any pool memory, but directly allocates via malloc()/naAlloc() - without ever freeing any memory (i.e. leaking). While the fgfs process will eventually get killed this way, the GC will be basically switched off. 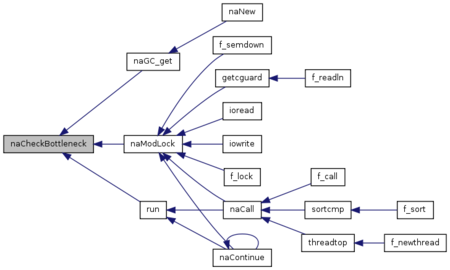 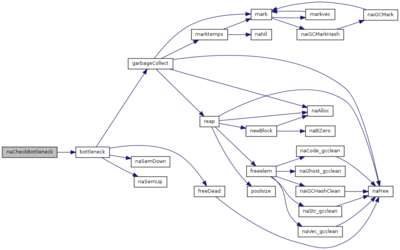 Whenever new memory from one of the global pools is being requested via naGC_get(), naCheckBottleneck() will also be invoked:

This checks if globals->bottleneck is true, and if it is, it makes sure that the bottleneck() function is only invoked after acquiring a lock. 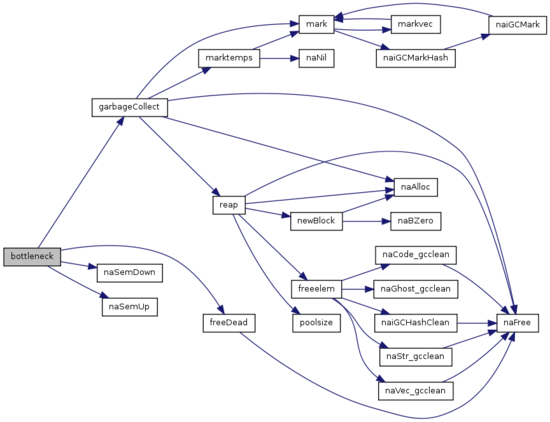 The actual garbage collection takes place in line 114 where dead objects from the memory pool are freed, and the garbageCollect() function is called if globals.needGC is true. 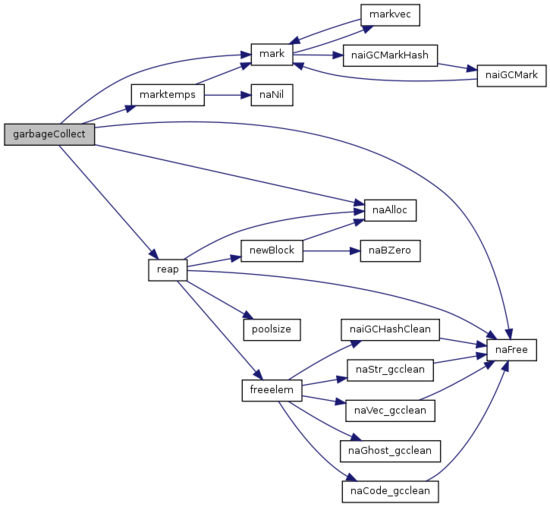 For each invocation of garbageCollect(), the following takes place:

All reachable objects are recursively marked using tagged naRef structures flightgear/simgear/next/simgear/nasal/data.h#l50, so that unreachable objects can be collected (i.e. because the reftag bit is not set) and freed. 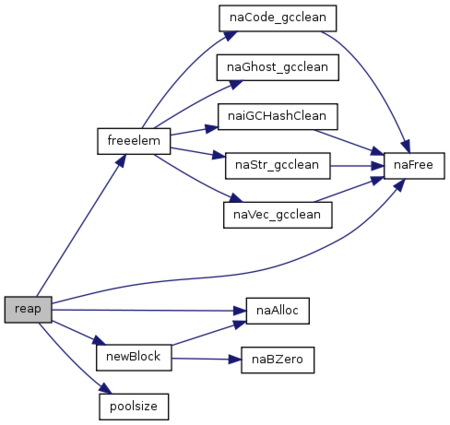 This is the collector function called by garbageCollect() which also frees elements and allocates new blocks for the specified pool: 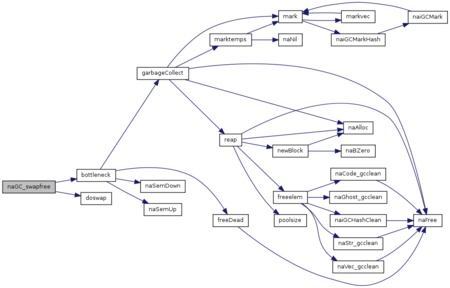 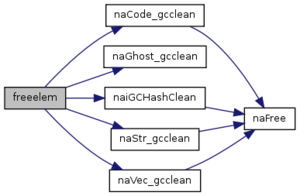 Will be called by freelem(), implemented for all native Nasal types: 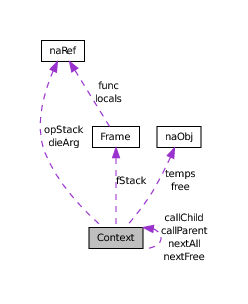 All core memory allocation takes place via wrappers in misc.c: