Latest progress: view from the CoPilot 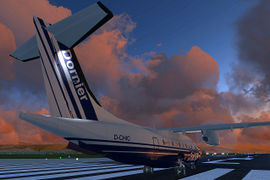 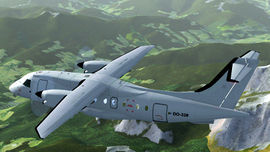 upper side of the Dornier 328, showing wing structure

The FlightGear model is currently in development, simulating the Dornier 328-110 Turboprop with ground spoilers and the Dornier 328-300 Jet. It features a realistic fdm, detailed PFD, MFD and EICAS displays with many subpages, a realistic electrical systems and has an incredible good framerate. A very detailed cockpit is in progress and will feature ALS shadows and lightmaps. It will have the same good quality like the EC135 P2 and Cessna 182 S, with comparable good framerate!

Special Thanks to the user Groucho from the FlightGear forums, who made it possible for me look into the flight manual! Also special thanks to xcvb85 who is programming the systems and is responsible for the great Canvas displays and systems!

The development has been started back in the 1980s as successor for the Dornier 228. Dornier found that there was a market for a 33-passenger aircraft, so they created an aircraft with a complete round fuselage and the TNT-wing (Tragflügel neuer Technologie = Wing of New Technology) of the Dornier 228.

Development started December 1988; its maiden flight was on December 6, 1991 and in October 1993 was certified.

The aircraft had been developed for high climb rate and high speed, but short landing which was possible due the wing and the new developed propeller. As non-typical for this class of aircraft the flight deck has been fitted with 5 Displays from the Honeywell Primus 2000 avionic. The cabin was very comfortable for its class, as it was wide and round, and there was an active electronic noise suppression, giving a jet-like feeling.

When Fairchild-Dornier went bankrupt, the production of the Dornier 328 had been stopped in 2005, only 217 aircraft (prop and jet version) had been built, plus 3 prototypes.

There are 4 Turboprop- variants available, and 3 Jet variants:

Ground spoilers and APU were optional on all turboprop variants

All that is left