This is a draft post where descriptions of improvements since FG 2018.3 LTS to aircraft and other features by developers is collected - along with suitable screenshots.

If you are a developer, you can just hit the edit button, create a section for an aircraft or feature, and type or edit a description. The new version of the wiki is incredibly easy to use, like using a word processor.

The most important things are the points about what to write, and some screenshots. Don't worry if wording or English is not perfect, it can be adjusted later. URLs to screenshots can simply be pasted if you don't know how to upload, along with a note giving CC-BY-SA-4.0 permission.

James has said he is willing to review and update the homepage if material is submitted to the wiki, or otherwise handed over to him. The first few articles have already been published.

Feel free to upload to the wiki, or just add the imgur link with a note saying permission is given for use under CC-BY-SA-4.0 for now.
Some of these screenshots may end up being used on flightsim.com (the editor has apparently reached out about trying to cover the last 2-3 years of FG)

If screenshots are needed for OSM2City, and FG isn't waiting until a better performing version before announcing:

List of performance tips and expectation management points from the newsletter - could be copied to the OSM2City worldbuild page or a dedicated page for the 1st rollout is available here in the 1st rollout info article and could be linked if suitable.

Currently placeholder text. For publishing a longer time after the improvement posts.

As of 2018.3 LTS, Flightgear has transitioned two release types:

There will be point releases containing bugfixes and minor updates for both release types. For example, 2018.3.6 was the 6th bugfix point release for the 2018.3 LTS - it was released in August 2020.

LTS releases will have bugfixes ported and the build maintained for longer. Development preview builds will be less stable, receive less testing, and are a bit more of a construction site where large structural changes are made to lay the foundations for the future. Some aircraft may not work on development releases. Power users can run multiple installs of Flightgear in parallel.

There are minor improvements planned to the launcher UI in 2020.3 point releases. There are a lot of big changes already underway and planned after 2020.3 LTS, so if you are curious keep an eye on future development previews leading to the next LTS.

More appropriate for another post a while after the release. This should provide a situation report for people that may be interested in contributing.

Developers please add descriptions & screenshots here. These should be for a dedicated newspost with a bunch of high settings screenshots.

It's possible to collect a bunch of aircraft with smaller improvements in one post - for instance if there are high settings screenshots available, making it convenient.

You can mention an entry is <ready> (or use insert->template->type ready to choose the ready template) if there's nothing more to be added and screenshots are also linked. 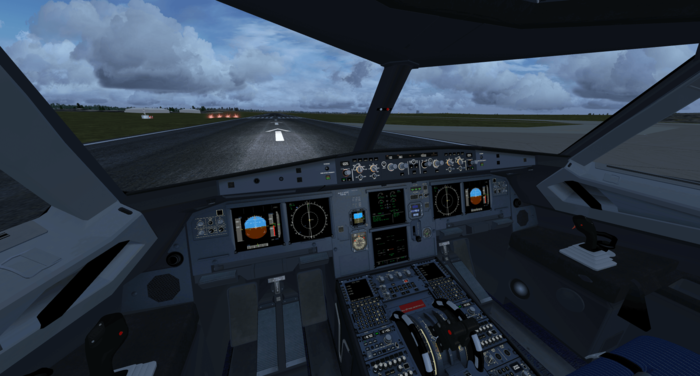 New to the 2020.3 release is an updated and improved version of the Airbus A320. First flown in 1987, the A320 is the second most produced airliner ever, with over 9,500 built to date. It was one of the first airliners to use fully digital flight controls / fly by wire, and a fully glass cockpit. 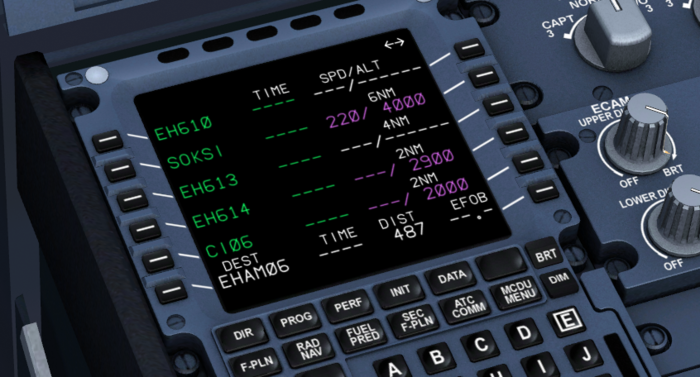 This aircraft has been recreated by a team of developers over many years, and is now distributed in FGAddon. Among other features, it has a working MCDU (Multi-Function Control Display Unit), which makes it one of the first aircraft in FGAddon to allow proper operation of a modern airliner's avionics. It also has some unique features such as allowing pilots to fetch their flight plans from Simbrief, or to request weather and digital ATIS in the MCDU. 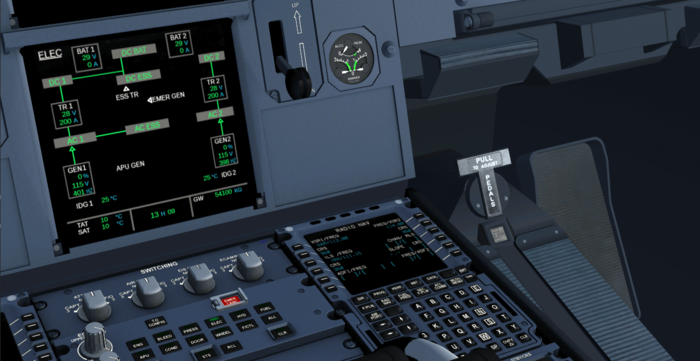 In terms of systems, it is one of the most detailed aircraft in FlightGear, as it accurately represents the behaviours of the real Airbus; for instance, each switch, valve, and actuator has its own power supply, and will only operate if it is powered. Thousands of logic diagrams and system schematics have been used to accurately represent the Airbus and to allow for some limited failure modelling. Some indication of the detail might be given by looking at the ELEC page on the System Display, and observing how the frequency of the generators changes as you adjust engine power. 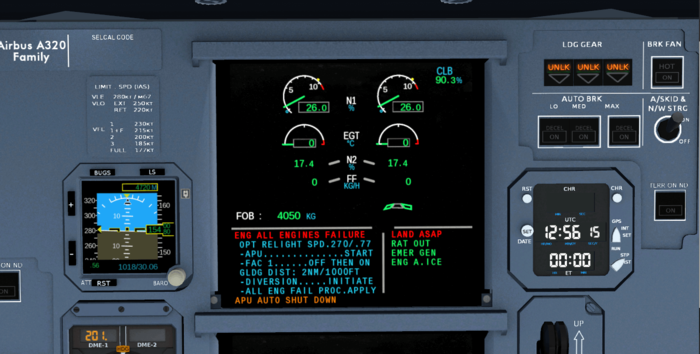 The A320 also features a ECAM system which monitors the systems of the aircraft, presents failures to the crew, and suggests steps to remedy them. Most of the important failures have their own checklist, for instance the ALL ENG FAIL checklist shown here.

In the future the A320 will be receiving a fantastic new 3D model and a new flight dynamics package -- keep an eye out for the update!

[Screenshot of STS 1 Launch with White Cumulus in background]

Space Shuttle has been in development for almost 5 years now, and "she" is still under work in progress to make her always more realistic and close to the real thing. A lot of official documentations, and performance manuals are still used to benchmark and upgrade what was already very nicely done. Last Shutte Stable release was end of the year 2019, next one might be for the end of the present year.

Meanwhile, the dev branch is fully usable and will be compatible with the 2020.3, with some really nice improvements.

However, it does require already a good knowledge of how the Shuttle works in the stable branch as many features and troubleshooting procedures are not detailled yet in the FG Shuttle manual.

Some of the new things that you can find in that branch are detailled below. For a more extensive review and explanations of the differents points below, you can have a look there: Space Shuttle-Release and Dev Change Log

The "official" launch area of the Shuttle had a really nice visual upgrade. When looking from an exterior point of view, immersion is greatly improved.

[Global view of the Cape at Sunrise]

Vertical view of the Cape

Until now, it was already possible to perform some rendez vous to ISS, following close to real procedures. It is now doable towards other objects, especially Hubble. A very rewarding challenge, as it pushes the Shuttle operations to their limits propellant wise.

Payload can be grappled again after being released from the payload bay, a game of patience which in real took hours with several detailled and time consuming procedures.

Eileen is a kind of IA here now to assist us in Station Keeping task while working on RMS operations or messing around. She is particularly useful when working on a satelite to grapple.

Space Shuttle Main Engine thrust,ISP , and consumption is now within a percent of the real datas. The mixture ratio in real was around 6, and it is what we observe in the sim (6 times more liquid Oxygen burnt than liquid Hydrogen). Hence, Main Engine Cut Off ( MECO) time is matching real one. Plus, the propellant remaining at MECO, called the Final Performance Reserve (FPR) is now within a percent ( 15000 pounds). It makes launch with high payload into a high inclination Orbit (towards ISS typically) really interesting and limitating performance wise, like in real.

An interesting read about that FPR, written by a former Shuttle Flight Controller: Wayne Hale: The key is Mixture Ratio

You can find below some in sim datas compared to real one coming from the Shuttle Crew Operations Manual (SCOM).

[Altitude Vs Time in Sim] [Altitude vs Time in Real]

The Space Shuttle is composed of a tremendous amount of valves and feedlines, going from the External Tank (ET) to the SSME to bring the liquid propellant into the Main Propulsion System (MPS). A lot of those valves are pneumatically actuated, by an inactive gas, Helium.

It allows also to create some inert vacuum in some areas where liquid Hydrogen and liquid Oxygen could be in contact, in the Oxidizer part of each Engines. Finally, it is used post MECO to purge the feedlines with remaining propellants ( 5000 pounds ! ). That system is highly complicated and interesting, with some capacities of Helium crossfeed between engines in case of leak.

The most visible improvement here is a closer to real fault message logic, announced when a parameter is going high or low. A good example is the electrical buses, with low/high voltage somewhere due to a short circuit. CWS is quite complex in the Shuttle. A lof of different kinds of alarms, depending of the seriousness of the failure. Plus it depends which software is loaded in the computer, the primary one or the fascinating Backup Flight Controller, ie. last level of redundance in case of major computer bug.

A good but dense guide about that system might be found either in the SCOM or there: Caution and Warning System guide

A quick glance on how it can look with a "simple" shortcut in one of the AC buses. It triggers quite some alarms and messed up a bit everything. Better have a good knowledge of what everyhing mean for a good troubleshooting

While hitting the atmosphere at Mach 25, a orange-ish Plasma glow can be observed around the Shuttle, causing black out and long minutes of sweating.

Hard to observe in real, we can have a look on it here and there.

Plasma during the hottest part of the entry, when the Shuttle dives into the atmosphere at Mach 24 and 250 kfeetish. Thermal constraint is there the hard boundary to stay away from.

Plasma during entry with Aurora in the background

Later in the entry ( below Mach 15), the glow starts to vanish but the belly shield is still under heavy thermal stress; Dark Maul style.

Most of the work is summed up here: Space Shuttle-Display adjustments (PFD,HUD,MEDS,DPS...). Already a lot of those changes are available on the Space Shuttle dev Branch.

The main thing here is to iron the visible part of the iceberg by fine tunning the display realism visually wise. As with the other parts of the Shuttle dev, it is based on real documentations (mainly the Data Processing System Dictionnary).

By the end of the year, a new layer of immersion should be available with the completion of that interior display rework.

Orbit reached, time for another batch of softwares and to raise the Perigee

Some Shuttle screenshots gallery to finish the update.

STS 1 on the pad, waiting fot the D day

Almost at the end of the first two minutes, the Solid Rocket Boosters ( SRB's) separation is closed.

A bit of rest for the crew, after a nominal Orbit Insertion

Back on Earth into a Stormy Weather...

Earthview, FlightGear's orbital renderer, is a fantastic piece of code that allows us to transition from an Aviation Sim towards a Space Sim.

You can try out the Space Shuttle (wiki), strap in for an unforgettable ride aboard the Vostok (wiki), or take a suborbital cruise aboard the X-15. The UFO can do quick visits. Supersonic jets with light load-outs can also fly parabolas whose peaks of 17km+ rise above much of the atmosphere and up into the stratosphere.

Already developed for some years now, EarthView had a nice upgrade this year. More information is available on the Earthview wiki, or the forum thread Earthview FG forum

Amongst others: better normal maps (for depth perception), bugs fixed, up to 16K textures depending on the season: Earthview world and clouds tiles - James has requested a bit more info/text for a post - see mailing list, maybe some text to go with the screenshots about what is visible will help.

Some shots below from this dream-catcher tool: