Reaching for the stars

Thorsten's approach for implementing the EarthView addon is sufficiently generic to also implement other celestial bodies like this - scenery itself is a different matter though, but the TerraGear tool chain will process pretty much any elevation data you throw at it and try to turn it into scenery (DEM for Mars being freely available)[1]

the Shuttle avionics is definitely the wrong place to learn the basics of orbital mechanics... it's all not very visual[2]

Ideally you would visualize it in 3d space, with the orbits as lines projected around Earth and the ability to turn and zoom. Otherwise the two most useful projections are groundtrack (for inclination, node crossing and what you should see looking out of the window) and the projection orthogonal to the orbital plane (basically the plot you show). There's no technical issue preventing me from doing the projections at least (Orbiter uses a series of similar generic MFDs), but my priority with the Shuttle really is to re-create the original avionics. I was more commenting on the fact that the avionics makes it hard to really know your orbital state - there's no moving map, inclination isn't displayed at all, node crossing time is on a different display than apoapsis and periapsis - the Shuttle doesn't seem to have a single summary display 'this is my orbit'. Of course, it doesn't also have any real capability to change orbit, so your orbit is always the one you launched into modulo small corrections. So from a pedagogical POV the Shuttle is a poor vehicle to learn the basics of orbital mechanics, and the Orbiter Delta Glider with it's vastly higher Delta v reserves is much better for learning (Vostok is even less suitable, it hardly has any maneuvering capability).[3]

We do have experimental code that also allows Canvas to be used on conjunction with arbitrary 3D models. Basically, what it will do is add a new Canvas "element type", called "model", where you can specify a filename of a 3D model, and then it will add the whole thing under a osg::PositionAttitudeTransformMatrix, so that you can freely position/scale and tranform the whole 3D model arbitrarily by accessing a few properties (that are then mapped to the osg::PAT methods to rotate, scale etc) - several elements can be added to the same "scene" Howto:Extending Canvas to support rendering 3D models 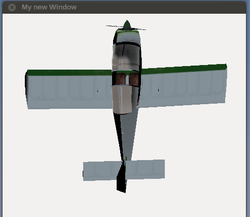 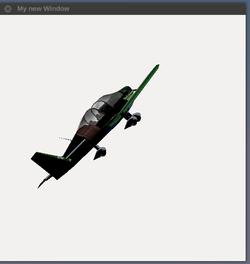 it may make sense to keep this in mind, especially given bugman's "directional moonlight" effort, i.e. conceptually you could even load your EarthView models/textures into the same scene, and "animate" it using a handful of properties (obviously, there are not the conventional FG light sources (sun) or the skydome etc)[4]