The ifconfig command is helpful to find information and the address of eth0. After making changes to the Raspberry network settings, use the below commands to activate the modified settings. After making the changes, take the Ethernet down. After a bit of time, use the up command to restart the Ethernet. This is when your changes go into effect. 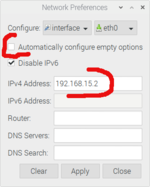 The screenshot of the Network Preferences dialog box, shows where the DHCP check box is and the Raspberry address. Right click on the network icon, upper right of the Desktop, next to the speaker icon. Click on Wireless & Wired Network Settings, in order to bring up this dialog box.

Barrier allows sharing a common keyboard and mouse between many computers and works with different operating systems. It also allows sharing the clip board. Barrier is in the Raspberry software repository. In order to have a Raspberry boot with Barrier running edit the following file. At the end of the file /home/pi/.profile, place the command barrier &. This will only work if the Raspberry is configured auto login, which is it's default setting. Barrier is not a component of the network bridge, however Barrier's performance will benefit from a network bridge.