A splash screen is an image that is displayed during the loading of FlightGear. They usually exist of a screenshot of an aircraft, together with the name/type of the aircraft and the name "FlightGear".

Creating custom splash screens is another thing that is very easy to do, just by looking at the documentation or by looking at existing aircraft, for example the default C172P.

There are two kinds of splash screens:

The splash screen image is configured by the aircraft-set.xml, where "aircraft" is the name of the aircraft. You can find these files in each aircraft's directory in $FG ROOT/Aircraft. 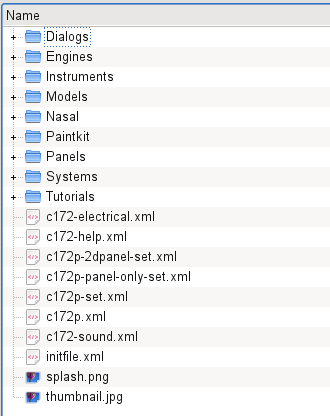 The set file supports a "splash-texture" tag in XML (just search for "splash-texture" using your text editor"), it should look like this and should be inside a <sim> tag and then a <startup> tag (so the path is /sim/startup/splash-texture):

The filename is relative to the Aircraft/ directory and will differ among different aircraft, but often it just refers to "splash.png". See for example the C172P:

In this case, the image is located in $FG ROOT/Aircraft/c172p/splash.png.

Aircraft that do not have a custom splash-texture specified, will be assigned a randomly chosen screen from the global $FG ROOT/Textures directory. Editing and overwriting these screens (splash?.png) will affect all aircraft without aircraft specific screens.

The easiest thing for you to get started with, would be to simply load an existing splash screen image in an image editor (i.e. GIMP or Photoshop) and start modifying it. Once you are finished, you can save the file to the directory where your aircraft is located, using a filename such as "splash.png", for an aircraft specific screen. In the aircraft-set.xml you will want to change the splash tag then, to refer to this image (case sensitive).

You could also edit the general screens, the only difference here is that you overwrite one of the screens in the $FG ROOT/Textures directory.