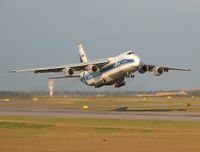 Real Volga-Dnepr Antonov An-124 Ruslan taking off from Helsinki-Vantaa airport.

Flightgear An-124 approaching to VHHH

The Antonov An-124 Ruslan (Russian and Ukrainian: Антонов Ан-124 «Руслан») (NATO reporting name: Condor) was the largest airplane in production until the Antonov An-225 was built. During development it was known as the An-400 and An-40 in the West, and it flew for the first time in 1982. Civil certification was issued by the CIS Interstate Aviation Committee on 30 December 1992.

The Antonov 124 was used by the Soviet Air Force, and continues to be used by the Russian Air Force. As a commercial transport aircraft has been used by different operators in the Soviet Union, Russia, Ukraine, Libya, United Arab Emirates, and the United Kingdom.

Due to the political and military tensions between Russia and Ukraine, the Antonov An-124 production was stopped in August 2014.

Eelko Gielis started a first project of an Antonov An-124 for Flightgear. Apparently, only the main fuselage was modeled, and the project seems to have stopped around 2009. The plane was included in the "Bahamas Triangle Disappearance" section. 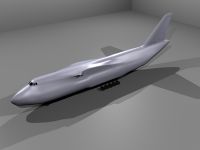 In 2016, Andino started a new project. It has a yasim FDM, already developed.

There is some development of the cockpit. Also two liveries are now available.

There is still a lot of work to be done: Overhead Panel, improvement of the Cockipit, Rembrandt, etc.