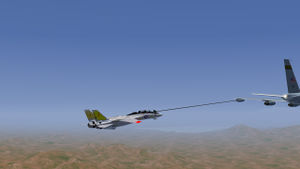 An F-14 has connected its probe with the left drogue of a 707-TT tanker. 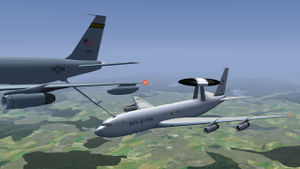 An EC-137D is flying behind a 707-TT tanker while the flying boom of the tanker is connected to the receptacle of the EC-137D. 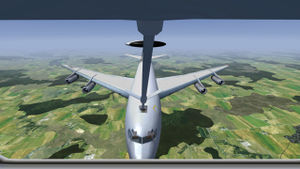 An EC-137D is flying behind a 707-TT tanker while the flying boom of the tanker is connected to the receptacle of the EC-137D. The aircraft is seen from the boomer's view. 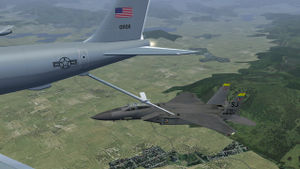 An F-15C is flying behind a 707-TT tanker while the flying boom of the tanker is connected to the receptacle of the F-15C. 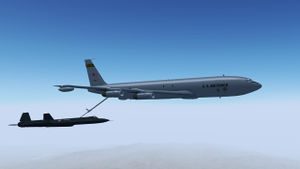 An SR-71 is flying behind a 707-TT tanker while the flying boom of the tanker is connected to the receptacle of the SR-71.

Part of this work can be found in the KC-137R advanced tanker project.

AAR can be performed with the 707-TT or the MV-22. The 707-TT provides a single flying boom at the end of the fuselage and two hose drum units that contain a hose and a drogue. The MV-22 can provide a single hose and drogue attached to its cargo door (Enable the drogue in the "Aircraft Options" dialog). Both aircraft require the ExpansionPack to allow the flying boom and drogues to move and follow aircraft. It is also needed to see the drogue and the hose. Download and install it in the usual $FG_AIRCRAFT folder (the folder where you normally install an aircraft).

Both the tanker and the receiver need the ExpansionPack to see the drogues. The user flying the tanker needs to install the receiver aircraft as well in order to read the position of the receptacle/probe.

It is very important to adjust the lag settings in Multiplayer > Lag Settings. Make sure you have FlightGear 2016.1 or higher. To determine the lag, you should ping one of the multiplayer server that both the tanker and the receiving aircraft are going to use. For example, to ping mpserver01, open a terminal and type "ping mpserver01.flightgear.org". Determine the average ping in milliseconds and convert it to seconds. For example, a ping of 123 milliseconds becomes 0.123. Open Multiplayer > Lag Settings, enable "Master switch" and "Apply to close mp". Then adjust the slider of "Lag adjustment" to the measured ping time to the server; in our example, 0.123. Alternatively, you can open the "Internal properties" window (ignore this if you don't know what it is) and set /sim/multiplay/lag/offset directly.

Use an ethernet cable instead of wifi. Wifi may give you a very fluctuating ping time to the server.

If you try to approach the tanker, the tanker will display the distance between your receptacle/drogue and the boom/drogue. If the tanker appears closer to you than the text suggests, then you might need to add a few milliseconds (5, 10, or 20) to the "Lag adjument". Give FlightGear several seconds to adapt after moving the slider.

Press the r key to move the flying boom to the ready position. Press d to disconnect. Press ⇧ Shift + d to move to the off position or to perform an emergency disconnect. While the boom is ready and able to track a nearby aircraft, the "READY" light should be lit on the boomer's panel.

To move the boom manually, hold Ctrl and then move the mouse. To extend/retract the telescope of the boom, release Ctrl and use the mouse scroll wheel.

The receiving aircraft needs to be within 1 meter of the nozzle of the boom. Once connected, you have a few extra meters of margin. With correct lag settings several people have demonstrated to stay connected for several minutes, even while in different continents. 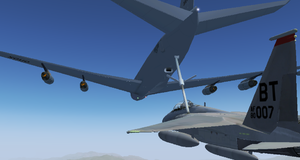 Pilot Directory Lights showing the fwd/aft and up/down status of the boom.

Modifying aircraft to be compatible with the flying boom or drogue

In order for the tanker to be able to detect compatible aircraft, the multiplayer model XML file of the aircraft that wants to have fuel needs to be modified. This needs to happen on the computer on which the tanker is running. For example, the F-14B's Models/f-14b.xml file contains:

Aircraft that contain a receptacle, for connecting with the flying boom, should use the value "boom" instead of "probe". For example, the F-15C's Models/f15c.xml file contains:

Once it has been implemented, this section will contain instructions how to make the receiving aircraft only add fuel when connected to the boom or a drogue.