From FlightGear wiki
Jump to navigation Jump to search
Not to be confused with Lockheed U-2.

The famous U-2 spyplane, for FlightGear.

The FlightGear aircraft described here features the latest, modern variant of the U-2, the U-2S.

The aim of this project is to create a detailed, realistic, but also fun simulation.

Therefore things like e.g. the FDM are developped with great care. The downside to this is that progress is slow. 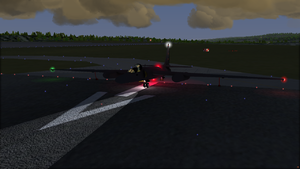 The simulation starts with the engine off, the aircraft is fueled to about 2/3 capacity. The APU can be thought as connected and the electrics powered on. Currently there is no custom electrical system. External lights are on.

A simplified startup sequence is provided.

The engine can be started by windmilling, when there is enough altitude to bring the engine to the needed n values. Use above procedure but without pressing "s". This is not (yet) a customized system but the default JSBSim behaviour.

Due to the lack of available data I'm using the flight manual of the original U-2. (See external links below.) I'm aware that this is somewhat a different aircraft but I believe it's still a valuable resource. Below I will use "FM" referring to it. Further I'm using images, drawings and flight reports.

Based on a model created using aeromatic:

Currently I'm using a "special" configuration that includes the horizontal tail for the pitching moment. Though I'm not convinced that this is best, so it might be subject to change.

A JSBSim fuel system is modelled. Only missing is the tank pressurization.

The fuel cross-transfer and dump system is fully functional but since the cockpit isn't finished there are no controls yet.

The respective properties are under /controls/fuel.

Estimations were made for the tank capacities. 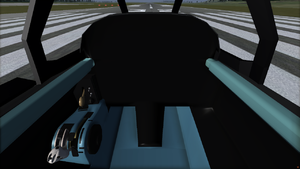 Currently I'm working on this. (See the image on the right.)

The sound is taken from FG base package for now.