The Lockheed F-104 Starfighter is a single-engine one-man supersonic jet fighter developed after the Korean War. Unforgiving to fly and sometimes called the "missile with a man it it", its career in the USAF was short, but it served at length in the air forces of West Germany, Japan, and Italy, among others.

There are several F-104 at the Luftwaffe Museum Berlin-Gatow.

An aircraft with somewhat of a reputation for dangerous handling, the F-104 model was approached with some caution. Flying the aircraft turned out to be easier than expected, but the landing was another matter altogether.

Take -off was relatively easy, except for the tendency to wander off to one side, which at high speeds can be disastrous. Once up to speed, however, the aircraft was a delight to fly, fast and easy to handle. The climb rate is something to behold in itself, and low level passes had me thinking that this was not a plane but a little rocket-ship.

Making turns at 140kt at low level, and on approach did not seem very true to life. Sure enough, the YASIM configuration file had the approach speed as 100kt or if I remember right, and I promptly changed this to 170 kt, after which things were more interesting. Handling was still fine, but the F-104 simply runs out of lift at low speeds and speed has to be kept up.

Landing is fairly safe if speeds are kept within limits. Adding to the complication is that the aircraft sits very low, and while groping for the ground one finds that the runway is nearing its end markers, which is not a very nice feeling at all. Braking also has to be done very carefully.

The model tested has a rocket motor fitted to its tail. ( Review by OpenFlight)

Items to be corrected

The model tested lacked many instruments, and had an awful flat shadow that followed the plane on approach, a shadow that was flat regardless of the bank angle of the aircraft. 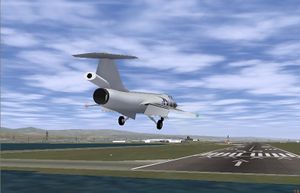 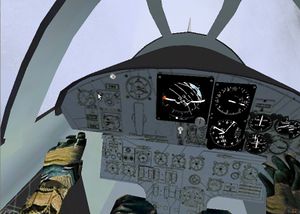 Pilot figure is a bonus, but few instruments 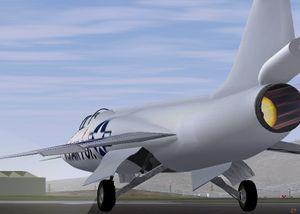 Afterburner fired up and ready to go 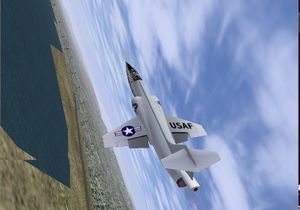 A turn at low level, note the flaps