This article lists areas that have a significant impact on soaring realism.

Note that as of 06/2010, weather modeling is under active development: A local weather system - for additional details you may want to check back with the flightgear forums or mailing lists.

Other open source simulators that provide support for simulating gliders, and that may be useful when improving FlightGear's support for gliding, include:

This section reviews the design issues affecting the user aircraft.

This is the best understood bit of glider simulation... designing a decent 3D model. You can tell if it's any good just by looking at it, although performance plays a part too. For the current FG glider state of the art, here's the ASK21 (April 2017): 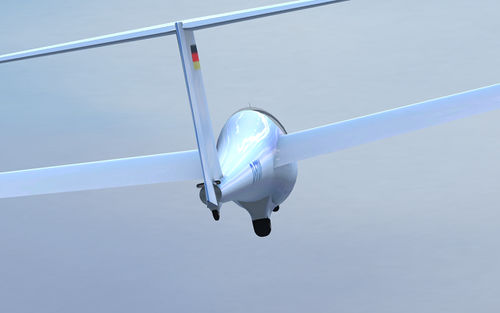 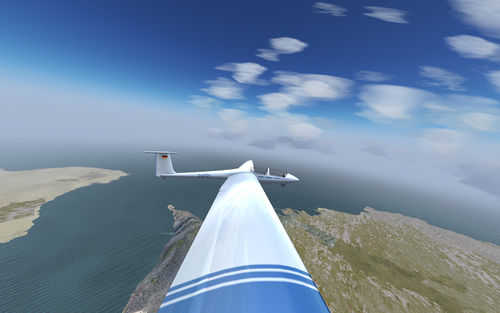 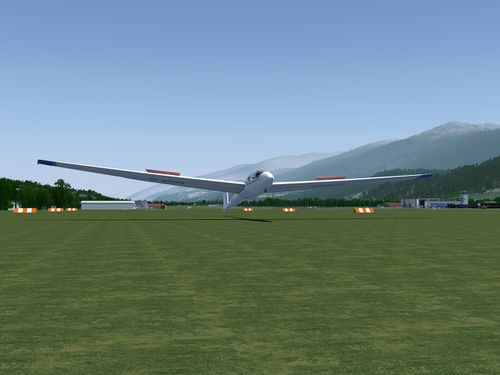 Less well understood, but still not rocket science, gliders need a good 3d model for the cockpit with the panel and the various levers (joystick, flaps, airbrakes, water ballast, landing gear). The current (January 2017) panels are displayed below - already quite well but mostly still lacking important parts such as levers: 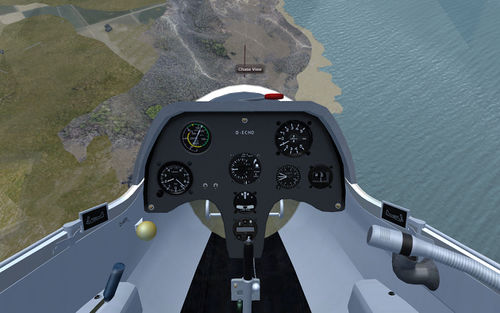 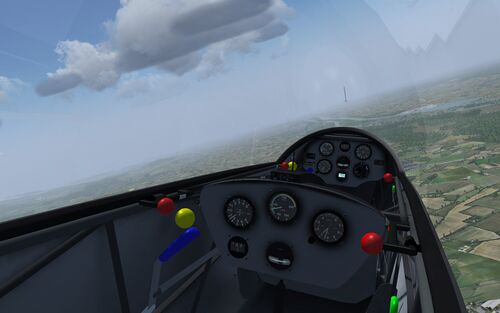 This is an old version, currently the glider is lost in the "Bermuda Triangle": http://wiki.flightgear.org/Glaser-Dirks_DG-300 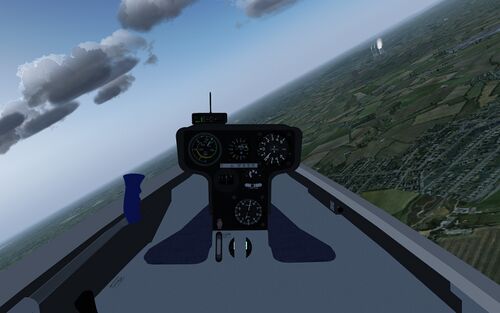 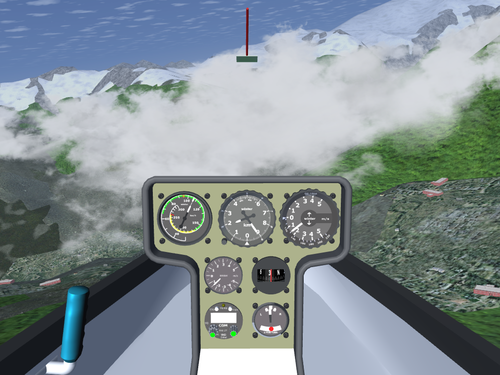 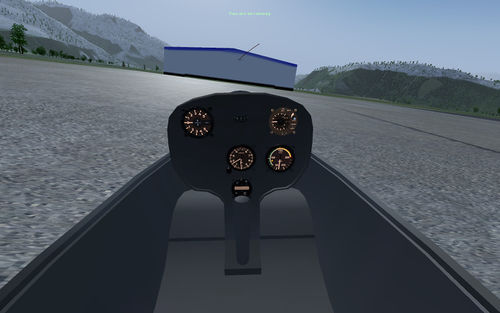 The (upcoming) Aerosoft Discus sets the high ground for glider cockpit and panel modelling. To see how high the bar has been raised see here

Unfortunately it is not possible to create a decent glider by simply copying across existing instruments from a power aircraft. The minimum instrument set is an altimeter, air speed indicator, and variometer. The variometer (vario) is unique to soaring.

Glider instruments are generally 80mm or 57mm in diameter. This standardisation makes it easier to add/remove/move instruments in the panel.

The mandatory instruments are the altimeter and the air speed indicator. These two and the main variometer are generally 80mm diameter instruments. The panel often includes a 'flight computer' with a digital display showing a variety of flight parameters which also takes up an 80mm 'hole' on the panel. The flight computer often drives a separate 'slave' variometer often in a 57mm hole.

Note: As of 10/2013 there is active development going on to improve FlightGear support for gliding specific instrumentation. More information can be found here and at FlightGear Newsletter October 2013#Soaring Instrumentation Toolkit.

At its simplest, a variometer is a rate of climb indicator. However, this pure (uncompensated) indication of vertical speed is very poor for climbing effectively in thermals as the effect of the vertical movement of the air is swamped by the pilot's actions with the control column (so called 'stick thermals'). Since the 1930's, real gliding variometers have used some method to compensate for the climb rate induced by the pilot pushing or pulling on the control column.

It is common for a glider panel to have more than one variometer - the largest (80mm) analogue dial may be displaying Total Energy compensated climb rate (see immediately below) while a smaller dial connected to the flight computer may be displaying Netto or speed-to-fly.

In order of complexity, the uncompensated 'rate of climb' vario is the simplest but less useful, the TE vario is still pretty simple but a lot more useful, the Netto vario is a fair bit more complex requiring the gauge to know the glide performance of the glider at every speed and ballast load, and the speed-to-fly vario is fairly complex to code as it has to know the Netto stuff plus tables for the optimum speed to fly at different ballast settings and external lift/sink rates.

People interested in adding this instrument to other gliders, will want to refer to the README_install file.

Note: As of 08/2012 (FG 2.8) there's a new Canvas subsystem available in FlightGear, which provides support for fully scripted avionics, so that custom avionics, including flight computers and MFDs can be entirely created in scripting space.

These electronic instruments primarily drive slave variometers of various types (see above) and compute your arrival height at the next waypoint or final destination (for which they are generally connected to a GPS). The screenshot below is taken from the Aerosoft Discus for FSX - this flight computer is the most complex gauge ever created for FSX, containing 3500 lines of code to perform computations then displayed through the simple interface, i.e. the slave variometer needle (top left), the 'petal' variometer needle on the display itself, and the digital numeric displays. The other analogue gauges (ASI, TE vario, engine tachometer) are not connected to the flight computer. An open source implementation of a "gliding computer" is available in the form of XCSoar for Pocket PCs. 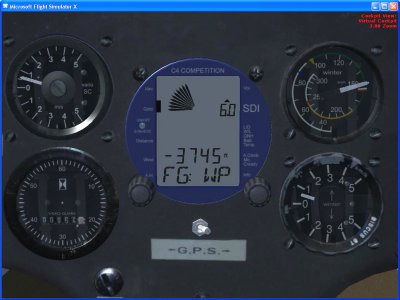 For a comparison of some of the more common flight computers, and a list of features, see: http://www.cumulus-soaring.com/flightcomputers.htm

To compare flights with others, it helps to have a log of your flight in the 'IGC format'. This is a text file with an agreed format, with some header rows and then one-row-per-timestamp for the lat/long/alt.

The full specification has become unbelievably tortuous, but most of the records are optional and an example of a working file would be:

IGC files can be uploaded to everytrail.com or can be converted by gpsvisualizer.com for viewing in Google Earth. Also, there's an open source tool available, named "gpligc".

This section reviews the requirements for the environment modelling, in particular the simulation of the vertical component of air movement on which gliders depend for soaring flight.

A paper on the efficient calculation of ridge lift is available from Ian Forster-Lewis. This is now implemented in CVS. Ridge lift is enabled by default but may be disabled by using

on the command line or by setting this property at runtime.

The FlightGear issues are also discussed in this forum thread

Solo soaring is all about admiring the scenery, and multiplayer soaring is predominantly about comparing times to complete the same cross-country task.