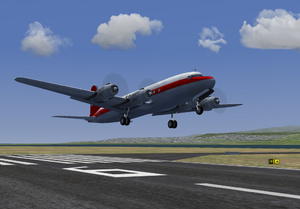 DC-4 landing. Note the front wheels, as opposed to the DC-3's tail-dragger configuration

The Douglas DC-4 was a four piston engine airliner. It was based on the DC-3, and in a similar way it was produced in both civilian and military versions from 1942 to 1947. The military version is known as C-54 Skymaster, many of these were converted to civilian use after WWII. 80 DC-4s and 1,163 C-54s were built.

The C-54 was the most commonly used aircraft in the Berlin airlift.

The FlightGear model is based on Syd Adams and Ron Jensen's Douglas DC-6, modified by Martien van der P.

The problem will stay unnoticed if you have the DC-6 installed.

Thanks to archive.org and its contributors, a premium source of information is available: the actual pilot training manual for the C-54 Skymaster. It is in the public domain and can be freely downloaded here: [1]

You will find a detailed description of the aircraft, explained procedures and ckecklists from pre-flight inspection to after landing, emergency procedures, etc, in fact almost all you need to fly the DC-4.