This aircraft package is now Rembrandt compatible! (Simply checkout the Rembrandt branch from the Git repository to get it)

The Airbus fly-by-wire system (adapted from the Airbus A320neo fly-by-wire system) continuously takes in the pilot's stick input, uses them as pitch/roll-rate commands, and calculates the required surface deflection to achieve the commanded rate. The fly-by-wire also provides flight envelope protection and the soft/hard bank feature.

For the pitch axis, the aircraft will maintain itself between a pitch of 30 degrees nose up and 15 degrees nose down.

The Airbus A320, A330 and A340 series have similar hydraulic systems. There are three hydraulic systems on the aircraft, each having it's own reservoir- the GREEN system, the YELLOW system and the BLUE system.

The green system is powered by the left engine's hydraulic pump, the yellow by the right engine's hydraulic pump and the blue system with an electric pump. During normal operation, each hydraulic system should have their hydraulic pressure between 2500 and 3000 PSI. (Pounds per Square Inch) The engine systems control the surfaces, stabilizers, flaps/slats and landing gears while the electric pump system connect to only the surfaces and stabilizers. In case a system fails, an alternate system can be used. The yellow system also has an electric pump which can be used to power the hydraulics using external power when the aircraft is on the ground.

The yellow and green hydraulic systems have a power transfer unit which is used to transfer hydraulic pressure between the pumps in case there is a 500 PSI difference between the pressures in the green and yellow systems.

All hydraulic controls (including the PTU) can be controlled form the Hydraulics section on the overhead panel.

We will show 2 example flights – one flight that uses a company route from the default flight database and one custom planned flight.

MIA134 is one of Merlion's alternate-day flights from Brisbane to Singapore. We'll just be using this as an example and you can use the same procedures from any route from the company database. (Take a look at our database flights below) Flight MIA134 is flown with an Airbus A330-243 (Rolls Royce Trent 772B-60 Engines) virtually registered S-QDAZ.

First, start-up at any of the parking ramps at Brisbane's (YBBN) International Apron. As Brisbane doesn't have parking positions at the moment, start-up on runway 01 and taxi-to (best using pushback) a parking gate in the international apron.

To start with the pre-flight planning, we need electrical power. For Airports that provide external power, we can use that and for other airports, the APU can provide power. At Brisbane, external power is available, so make sure your ground services dialog has external power box enabled and turn on EXT PWR from the Overhead Panel. (View)

Before we start anything, lets make sure everything are how they should be. Make sure only the following overhead panel buttons have OFF showing on them: HYD YELLOW ELEC PUMP, ENG1, ENG2 and CTR TNK LTK FUEL PUMPS 1 AND 2, BAT1, BAT2, GEN1, GEN2 and APU GEN. EXT PWR should show ON. Now, look at the pedestal and make sure both engine master switches are at OFF, the throttle is at idle, the engine mode is set to NORM, the speed-brakes are at 0, the parking brake is ON and the flaps lever is at 0. Lets now start with the pre-flight planning.

We have completed out basic flight planning. We will focus on radio navigation later. Let's now fuel up for the flight. As we entered in the mCDU, we'll be starting with 130 blocks of fuel for this 8 and a half hour flight. That's 104,500 KG JET-A fuel. Open the Fuel Truck dialog, enable to truck, connect it to the aircraft, enter 104500 in hte REQUEST KG and Start Filling up the aircraft. Once the fueling is complete, we can disconnect the fuel truck and proceed to starting up the aircraft. Remember to first disconnect all ground services and remove the chokes.

Release Parking Brakes and use 2 notches of Flaps for take-off. Pushback and taxi to the runway as usual. While taxiing, you could set your autopilot and other preferences. For autopilot, I'm going to make sure everything is disarmed and then set speed to IAS:250|MACH:0.72, altitude to 36000 ft (switch the black knob in behind the ALT knob to 1000 for easier scrolling, V/S to 2200 and finally click on the HDG knob to turn it to Managed Mode. You can also set ND and Lower ECAM Display Pages- I use the NAV page on the ND with 40 nm range (VORD, NDB and ARPT selected), and normally keep the FUEL page on the Lower ECAM. If you need to check another system, you can use the switching panel to change to that display.

When the runway is clear (and/or you have ATC's permission), taxi on to the runway and turn on the Strobe Lights. Power up the throttle all the way, and rotate at Vr and make sure you're airborne by V2. Retract your gears and when you reach the respective flaps extension speeds (PRINTED ON THE MAIN PANEL), retract the respective flaps. Once you've maintained a steady climb, turn on the A/THR and AP1 from the Glare-shield panel.

The autopilot will automatically fly the departure procedure you entered and then transition to the F-PLN (flight-plan) from the Company Route. Once over 10000 ft, switch to 280 KIAS Speed and keep climbing, Around 18000 ft, switch to mach (setting at 0.72) and reduce the V/S to around 1800 fpm.

Once you're over FL260 (26000 ft), reduce your V/S to 1000 fpm and increase mach to 0.78. Then sit back and relax (or go do something else) while the computer automatically takes you to your destination.

This flight was requested by Detlef N. (MIA0283), and video tutorials were recorded for different sections of the flight. The videos can be viewed below or in the FlightGear Airbus YouTube channel. Thank you for watching!

The Default Flight Database contains Merlion Virtual Airlines Airbus A330-200 Routes. This database can be used by anyone, whether he/she is a merlion pilot or not. The example flight above explains how to use routes from the Flight Database.

The following routes are complete and available:

The Rest of Merlion's Flight Database is available for Merlion pilots from the website Downloads section.

We have completed the highest priority developments on the list, if you'd like us to do anything for the aircraft, please make a note below. 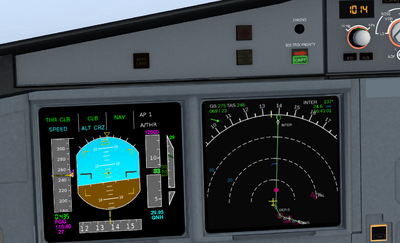 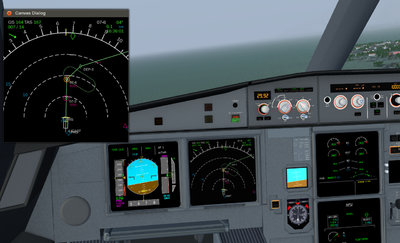 A recent fork of the project is adding more features to the Aircraft, such a Canvas based Navigation Display and more realistic flight modes. This fork is currently under development and can be cloned from gitorious/a330-200/a330-200/c6fc6d1f48e1898a7036376e5156d2b65ec08715: It will be merged with the main project in the future.

Here's a list of the main features introduced by the fork: