The Airbus A320 family of short- to medium-range commercial passenger airliners are manufactured by Airbus and are the only narrowbody in their product line. Family members include the A318, A319, A320, and A321, as well as the ACJ business jet.

First delivered in 1988, the A320 pioneered the use of digital fly-by-wire flight control systems in a commercial aircraft. With more than 4,000 aircraft of the A320 family built, it is the second best-selling jet airliner family of all time after its primary competition, the Boeing 737.

The A319 is a shortened, minimum change version of the A320. With virtually the same fuel capacity as the A320-200, and fewer passengers, the range with 124 passengers in a two-class configuration extends to 3,600 nautical miles (6,900 km), the highest in its class. A319s are among the most popular variants of the A320 family. In 2003 easyJet took delivery of A319s with smaller galleys (as EasyJet do not serve meals on some of their shorter flights) and 156 seats in a single class configuration. To satisfy evacuation regulations, additional over-wing exits were included.

According to the New York Times the A319 was introduced at the request of Steven Udvar-Hazy.

With jet fuel prices rising dramatically, Northwest Airlines is replacing the McDonnell Douglas DC-9 aircraft it has had in service for decades with the A319, because it is 27% more fuel efficient than the DC-9.

The large EasyJet order of 120 A319s plus 120 options was among the biggest aircraft sales deals in recent times, rivaled only by chief competitor Ryanair's order for Boeing 737 aircraft.

It is powered by the same types of engine as the A320. JAA certification and service entry, with Swissair, took place in April 1996. 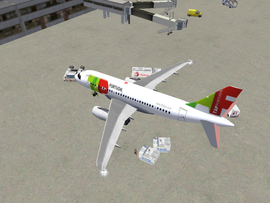 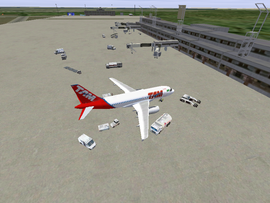 Airbus A319 in TAM livery 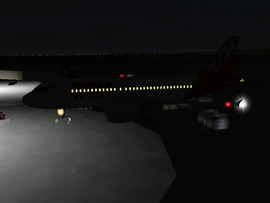 Airbus A319 at night