From FlightGear wiki
< User:PTMN
Jump to navigation Jump to search

This tutorial is aimed at people who simply want to go from A to B with the Boeing 777 and are new to jet flying in FlightGear.

Here, we will cut corners, a lot of corners. But hopefully, getting the Boeing safely off the ground and back down where you want it will be a good starting point to learn more in depth.

The flight for this tutorial will be short for a 777-200, but it doesn't have to be pointless. 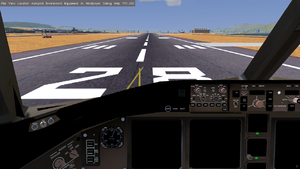 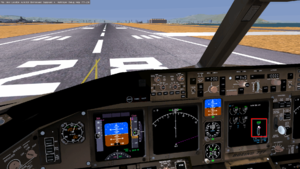 Note: If you want the full manual procedure, have a look at the Start Procedure. 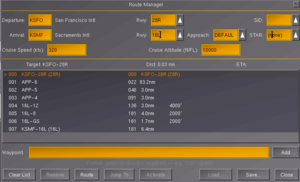 The route after activation. 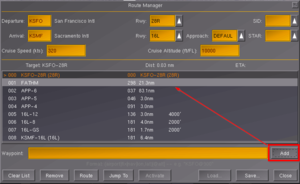 The FATHM waypoint added to the active route 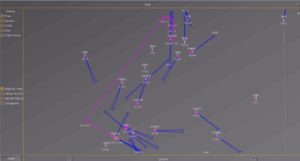 Shows the route used in the tutorial, as it should look in the "Map" dialog.

If the route in the map looks sensible. You can close both screens.

Our aim is really to let the autopilot fly the route we configured in the Route Manager.

You can configure it via the cockpit by clicking on the appropriate buttons and rotating the various wheels, but I find it easier to use the autopilot dialog window for some of the settings. 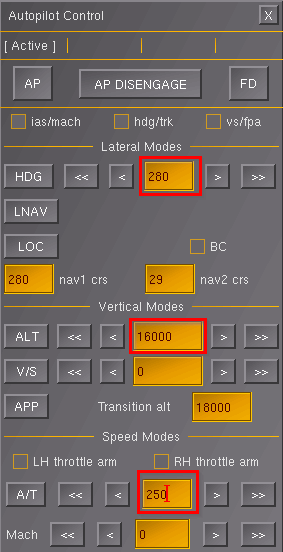 Autopilot Settings for our trip.

Now, in the cockpit itself:

That should be about it, now, when you are above 400 ft after take off, you'll be able to click the "AP" button to activate the autopilot.

The climb should just be happening now with the autopilot, but what I like to do, even though it's probably incorrect is click on the autopilot's "FLCH" (flight level change) button. Which will then automatically move you up to the set altitude (16000 ft).

This should all happen automatically, once we hit our Waypoint ... (see Equipment > Map, and your cockpit display as well) you'll notice the plane banks and sets you on course for the next waypoint.

Here comes a screenshot to see the waypoints in the cockpit, the distance, GS, ...

In order to land, we need to configure our radio (NAV1) to listen to the ILS frequency of the landing runway (16L).

When at about 50 nm of the next waypoint, in your autopilot set the altitude to 2500 ft.

When you reach 2500 ft at 230 kts the plane will level off and will stick to this altitude as long as we don't get into our glideslope. We can use this level flight to lose more speed.

Gradually lower the autopilot's speed until you are at about 170 kt. You'll have to move your flaps down to about 15 (todo: some more details on this).

One thing you can also do now is set the autobreaks, I usually set them to 2 (todo: screenshot)

When you hit the waypoint APP-4, click on "APP" on the autopilot. not much should happen but this will tell the autopilot to LOC to the ILS localiser.

After capturing the ILS LOC you can:

At some point, you will intercept the vertical glideslope. When this happens the plane starts to descend to the runway. Here, if you notice you're ending up above the glideslope, lower your speed some more to make it easier to follow the slope.

Note: If your plane gets a bit wobbly while flying level at low speeds, try switching off the Autothrottle and control the throttle manually to maintain your desired airspeed. When you are stable again, switch Autothtrottle back on. Or you can just let it wobble :) This usually is only a problem on leveled flight, once the glideslope is being followed, the plane usually becomes stable.

You'll want to be ready to take control, but normally the plane is pretty good at landing itself. As soon as the wheels touch the ground, move your flaps up again to reduce lift. Once the nose wheel touches the ground, apply some break (and reverse thrust using the "del" key) to slow the plane down.

So, really, to get from A to B with the 777 using automated flight, you hardly have to do anything. But this is only an ideal scenario.

Again, this is not a realistic flight. There is much more involved in a real flight. We haven't covered:

In FlightGear, when in multiplayer mode, you can encounter ATC's (Air Traffic Controllers) run by a real person. You will have to be able to follow their requests in order to approach the airport, instead of a pre-programmed route. You'll get instructions for headings, speed, following "VOR", ... So before you do that, practice your maneuvres by controlling your autopilot to make sure you can follow the ATC requests.

The 777 is a pretty complete plane. There are some other large jets for FlightGear which are very complete: the Boeing 747 and the Airbus 380. But these are not in a standard 3.4 installation. They also seem to be even more realistic, making them a bit harder to fly for novice users (at least that is my experience).