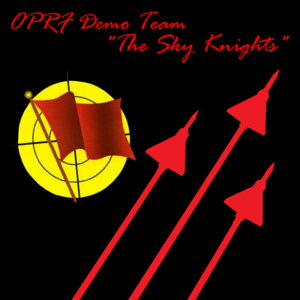 As to now, the Sky Knights demonstration team flies on Mirage 2000-5 with custom liveries and consist of 10 active pilots qualified in formation flying. The pilots Knight One to Knight Three are the founders and developers of this entity, and the squadron is maintained by all demo team pilots. The pilots are: 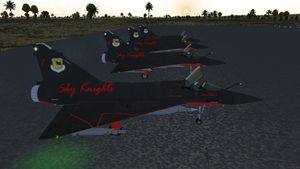 Four Sky Knights at the ready!

The Demo team is based at LFTH - Le Palsylvestre Navy and LFMN - Nice Côte d'Azur, on the French Riviera.

The Sky Knights flight school consists of flight instructors, usually members of the demo team, and trainees. There are several courses of training:

At the end of their training, the trainees are fully operational and they can start another course of training, or be included in the demonstration team.

The Sky Knights regularly organize events, like the usual Saturday afternoon event (which happens every Saturday at 16:00 UTC) or formation flying, generally above one of their homebases, or around KLSV and UUDD, where you can see them with occasionally F-14s, F-16s and MiG-29s. You must be a member to participate.

The creation of a demonstration team was the base of the squadron, but even as there were only three participants the idea to formate a community was present. It results in a merge of a combat community such as OPRF, a place where you can find many superb aircraft not in the FGAddon, a community without age limits or such, and being able to fly with beautiful aircraft in nice landscapes, simply enjoying the ride.

Join us on our website: https://bit.ly/sky-knights and don't forget to join us on Discord: https://discordapp.com/invite/Psydd5Z (it is where we generally discuss). If you want any information about the Sky Knights Squadron, you may find Wolf around LFTH, KLSV or UUDD around 16:00 UTC on mpserver01, or contact him at sky.knights.demo.team@gmail.com