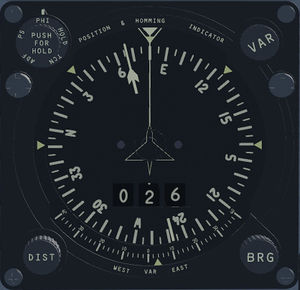 When you look at the cockpit of the FIAT G91 (but also of the F104) you can see in the center at the top a very particular instrument, particularly large and with four knobs on the sides. That instrument was one of the first navigation systems that used Doppler radar to determine ground speed.

The accuracy of the instrument was, for those times, rather high, as it allowed to travel a long route up to 999 miles with a deviation in the position of the aircraft of 2-3%, a contained error that could be exploited both for flights both military and civilian in the transatlantic route, and in tactical flight in enemy territory or in areas with little radio assistance coverage. However, the real disadvantage in military use was that the instrument allowed to achieve this accuracy only with the use of the doppler radar, in the event that the pilot had disengaged the radar device, in order to be less visible to the enemy, the accuracy decreased a lot and was linked to the real knowledge of the local weather situation. 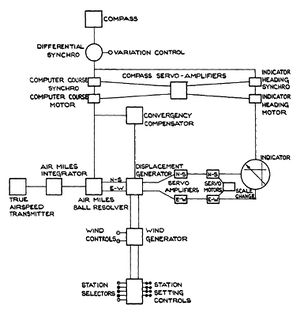 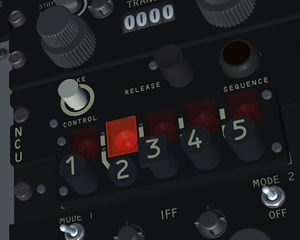 Programming The instrument allows you to sequentially follow up to five routes stored in the Station Selector (unit with the code NCU located to the right of the pilot). A route consists of two values: N-S and E-W coordinates measured in air miles of the next point [1]. The NCU allowed the insertion of a box containing four multiturn resistors (10 turns) to enter the distance N-S and other four multiturn resistors to enter the distance E-W. Once the route was planned, the navigator made a list of max. 5 pairs of coordinates, the first pair was not inserted into the device, but only communicated to the pilot, who set it on the display, the other four pairs were set by a technician using a special programming device and a screwdriver that turned the potentiometers placed on the programming box. The cassette could be inserted into the compartment with a light pressure and extracted using the release button [2] dell NCU unit.

Programming The instrument allows sequentially follow up to 5 routes stored in the Station Selector (unit with the code NCU located to the right of the pilot). A route consists of two values: N-S and E-W coordinates measured in air miles of the next point [1].

In the simulation, as will see later, the two coordinates have been replaced by a distance and an angle (heading), with respect to the geographic North. In this way it is possible to quickly integrate the polar coordinate programming method of the routes obtained from the route manager of the FGFS program with the N-S and E-W system used by the PHI. 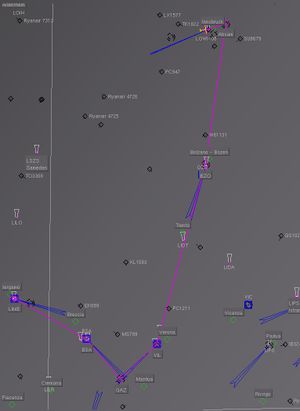 To load the data into the PHI table (in fact it is as if you were programming the "Selector Unit Programmer" (NCU) portable cassette, just click on the [Activate] button of the RM. you go now on the menu [Fiat G91] followed by [PHI - route system] opens a window showing various parameters among which we highlight five columns that correspond to the five 'buttons NCU, these columns have been filled in by the distance to cover, the direction and finally the altitude of the flight obtained by the Route Manager (if the altitude is zero in the RM this is set to 15,000 ft).

Below we have a section that defines the way we want to generate the route: 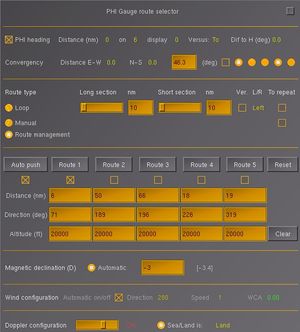 Route programming table to be entered in the PHI memory

In reality the five columns corresponded to the programming of only four columns, the first was set manually by the pilot.

The [Auto push] button allows to obtain the automatic progression of the route, in reality it was manual, obviously you can decide the progression manually.

The next block is the insertion of the magnetic declination, also in this case it is automatic, at least that the pilot does not want to do it himself.

The Wind configuration is used to automatically enter the wind direction and speed, otherwise it must be entered manually with the appropriate PHI system gauge.

Finally there is the section dopplerwhich defines four possible ways of use:

The selector sea / land allows you to adjust a filter that improves the Doppler's operability when you have to cross a stretch of sea.