With Wireshark we can now extract some pilot(s), use a certain time interval of traffic, or see certain traffic properties. 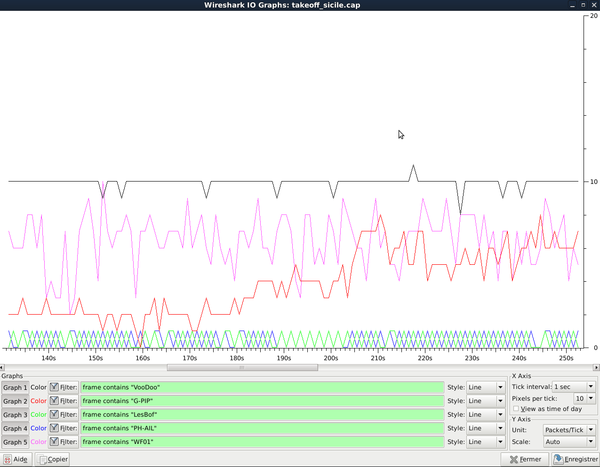 Until now I either use an other PC to send traffic back to my FlightGear PC, or i send to the internet box's external IP address, with a redirection to my PC for the port used in its firewall.

It is up to you to find your MAC and IP address. You can use Wireshark on some network traffic between the two, or ifconfig on Linux etc. Here is the "magic" line,

Now we start FlightGear with multiplayer enabled by sending to a server (it can be a MPserver or the address of a valid local host on your network, for example 192.168.0.17).

tcpreplay works fine this way if we don't need a very good time flow sync, as it end being late, depending on the CPU usage mostly. I didn't notice this issue at first, but this became evident using lag statistics available recently in next, so to keep a good sync between tcpreplay and FlightGear, using a core affinity, setting a priority higher and preferably on a not overloaded PC/CPU core makes things better, so we got something like that on Linux:

The -x option (time acceleration) ensure a good time sync over the replay (find yourself the best value for your config :) ), i just need to adjust the time offset for the mp clock, to have replayed planes in sync with my session, considered as "real time" buddies. 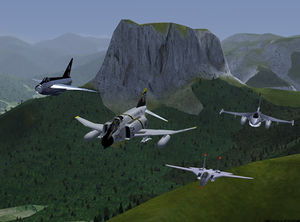 The "Mont Aiguille", in the French Vercors Massif.

If you do not have time to make a record yourself, you can use this flight in the French Vercors Massif (3.4 MB). Start at LFLU, runway 01 with the UFO or in a plane capable of more than 400 kt, and follow the leading F-4N in a Vercors Massif trip, followed by a Lightning, a F-16 and a F-14B. It is better with a detailed scenery like "La France d'el maxo".