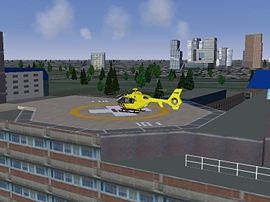 An EC135 at the helipad of a large hospital in Amsterdam, the Netherlands. 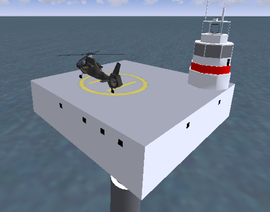 The current FlightGear world has little helipads to fly from/to with your helicopter. This article is meant to provide help in the progress of making a helipad.

Every face in FlightGear is solid and can be landed on by default, so helipads can be modeled just like any other object.

Placing lights is very easy. FlightGear contains two basic lights in the $FG ROOT/Models/Effects/Lights/ directory: the red one is usually used to mark obstructions, while the green ones mark the helipad. You can link to those models from your buildings .xml file like this:

Right now your helipad can be landed on, but we do like to takeoff from it aswell, don't we? Therefore, we need to extend the apt.dat file, which stores all airport information. You can find it likely in $FG ROOT/Airports.(Mac route = FlightGear/data/Airports). Before we can edit the file we need to unzip it first. Be sure to always make a backup before you change anything.

Once it's unpacked, open it with any texteditor you like (TextEdit is prefered for MAC users) and scroll down to the bottom of the file, where the heliports are listed (lines with [H]) in alphabetical order. Now we need to add one or two line(s) to the file, in order to add our helipad as a startup location.

As an example, the lines below are used for the helipad on the roof of a large hospital in the Netherlands.

In the airport list of FGrun it will appear as EH0001, VU medisch centrum [H] with runway H1.

Let us take a closer look at these two lines. The first line is only neccesary when the airport/heliport does not exist yet. If that is the case, you can add the helipad with just the second line.

Save the file after you've made your changes and zip it again, overwriting/replacing the old apt.dat.gz file.

At the time of writing this wiki, the Mac's GUI launcher cannot synchronize the apt.dat update at run time, and is also not able to access the Helipad part of the apt.dat file, and therefore the Heliports are not listed in the ‘position’ page of the Launcher, where you usually choose your starting points.

Refresh your FlightGears airport cache, with the button on the Airport page of the Launcher. Now your heliport should come up in the list. Just select it as every other airport and run FlightGear to see if your hard work paid of.

If you want your helipad to be included with a further FlightGear release, make sure to send your change/addition to apt.dat to http://data.x-plane.com/ and upload your model to the FlightGear Scenery Database.

Untill FlightGear moves to the new apt.dat format, place your apt.dat changes in FlightGear User Created Helipad List, so others can enjoy your helipads aswell. If you send your changes to Vic Marriott(vic165@btinternet.com), he will update the list for you.