Howto:Add instruments to a cockpit

From FlightGear wiki
(Redirected from Howto:Adding instruments to an aircraft)
Jump to navigation Jump to search

This is one way how to add instruments to a cockpit. While many of the aircraft for FlightGear have both rather detailed and completely instrumented cockpits, many aircraft either only have the most basic instruments or even none at all.

Fortunately, adding already existing instruments to a cockpit is a relatively easy task. The biggest difficulty is actually placing them accurately.

For aircraft that are licensed under the GNU GPL (all aircraft on the official download page are), instruments can be re-used in other aircraft when released under the same license.

Let's update the instruments of the Dash 8-300Q for a start.

The existing aircraft, version v20101217 from the version 2.6 aircraft download page has the following set of basic flight instruments. 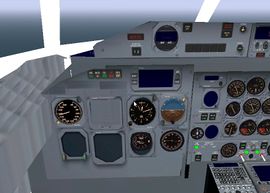 Cockpit of the Dash 8 with some instruments missing.

We can see that our aircraft is lacking the following:

First let's add the VSI (Vertical Speed Indicator) . Locate the tags for the ASI in a similar aircraft config file, the Beech 1900D (B1900D). These appear in the B1900D.xml file as follows:

Copy this set of tags as shown above into the Dash8 300Q xml file in the models folder. The file is named dhc8-300Q.xml

The instrument now has to be placed in position.

We will use an existing instrument, the Air Speed Indicator of the DHC8 as a reference. The DHC 8 pilot ASI has the following settings.

Copy the <offsets> ... </offsets> section and paste it into the offsets section of the VSI instrument, replacing the existing settings.

You will find that the VSI, the new instrument, will appear on top of the existing one. This confirms that the instrument appears in the cockpit.

To place the instrument in a correct location, use the following adjustments:

Finally, adjust the depth of the instrument (x - value)

A shortcut: multiple copies of an instrument 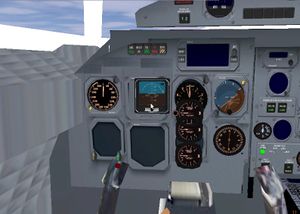 The path can be left as follows, or the instrument related files (.ac, xml and image files) can be copied to the DHC8 folder and the reference can be changed to that folder:

can be changed to 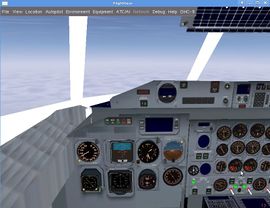