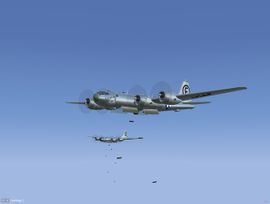 Military aircraft are rarely seen singly: they usually operate nowadays in pairs or larger formations. The pair is the basic building-block, but historically the "vic" of 3 was also used, until it was realised that this was tactically inflexible, and the pair was adopted instead.[1]

AI Wingman is the method in FlightGear whereby one or more aircraft can be added to the main model to build up formations. There is a significant framerate cost involved. However, formations of up to 12 aircraft have been tested, and with careful choice of options, and a fairly powerful computer, reasonable frame rates can be achieved, even at KSFO. Wingmen are not AI Aircraft. In the interest of framerate they are in fact a sub-class of slaved objects, with added sinusoidal noise and some simple AI rules. They can be released to act independently in a limited way: they can break and rejoin a formation. 12-Ship Formation video

The formation can be changed by the use of a Nasal script. There is no collision detection or avoidance, so you must avoid flying the wingmen into each other during a formation change. There is a significant framerate cost involved. The wingmen can be as simple or complicated as you wish. The ones currently implemented tend to be fully detailed, and can be "ridden". This is uneccesary, but gives a fun viewpoint of the formation.

This howto will explain how to add wingmen to your model

First, you need to create a file with the extension .xml containing at least one <entry> tag within a <scenario> tag. This file can have any name you like, but MUST go into the directory AI with all the existing scenarios. Here is an example taken from the $FG ROOT/AI/wingman_b29_demo.xml:

Step 2: adding the Wingman to your model

There are two methods of adding Wingmen to your model:

First, add these lines to your model ~-set.xml file within the <sim></sim> tag:

Where <scenario n="100"> contains the name of the file you created at Step 1 above.

Note: The file name has no extension, and must be in $FG ROOT/AI.

Second, add this command to your command line:

These methods can be combined, so wingman_b29_demo contains the basic formation, while wingman_b29_2_demo and wingman_b29_3_demo define additional formations of Wingmen.

Step 3: adding Formations to your model 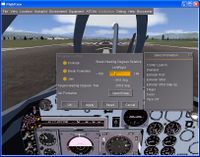 To activate the generic Formation Selector Gui add these lines to your model ~-set.xml file within the the <nasal></nasal> tag 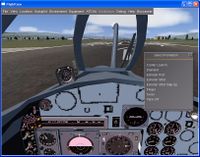 Optionally, you can add this key binding: Menu-Formation-Selector.jpg

This will display only the selection menu